"Simply put, for what it is, It Comes At Night is flawlessly assembled; the film's accomplishments are almost invisible."

I write this review of Trey Edward Shults‘ It Comes At Night with hesitation, as it may do the film a disservice, establishing certain expectations that are not indicative of the way in which it is a good film. Don’t watch the trailers. They suggest a film that It Comes At Night isn’t. Go in with your mind as blank a slate as possible. What’s good about Shults’ film may not be immediately obvious, which means that expectations aren’t a benefit. It also means that conveying why it is so good is problematic for a reviewer.

I see a lot of films and of all the films I see, I enjoy few. That has something to do with that I’m possibly more discerning than your average punter but principally it is the result of most movies being underwhelming. Filmmaking is a business. Good films slip through the cracks. And I can’t remember the last time I whispered, “holy shit, this is amazing,” during a film. I may never have, until this afternoon, when I watched It Comes At Night. 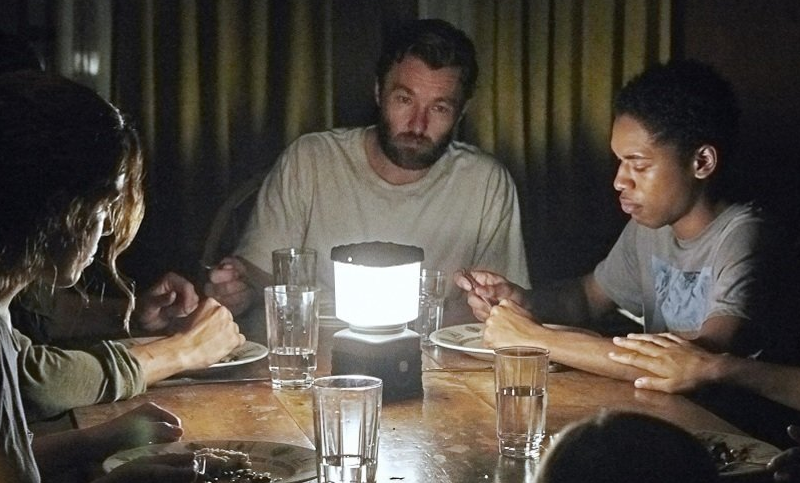 A family of four become a family of three in the opening moments of the film. The three remaining are Paul (Joel Edgerton), Sarah (Carmen Ejogo) and Travis (Kelvin Harrison Jr.). The dynamics of their relationship are developed through understatement over the course of the film. The family live in a boarded up house, in the middle of the woods, because of an outbreak of infection that brought about that loss of that fourth family member. During the middle of the night, the house is broken into by Will (Christopher Abbott), who claims he is trying to find food and water for his family, but may not be what he seems.

The brilliance of It Comes At Night is not in innovation. No doubt you will have seen many other films, television shows, video games that Shult’s film resembles on a superficial level. Simply put, for what it is, It Comes At Night is flawlessly assembled; the film’s accomplishments are almost invisible. I was never not in awe of how Shults conveys information. Every element of this film is entirely suited to the purpose of every other element; the look, the sound, the prodigious editing. If It Comes At Night is a film comprised of elements that you have seen in many other films, then the way those elements coexist is better than they ever have been.  I have rarely been so charged with interest regarding where a film might take me, and how it was going to do it.


This also has to do with not just how Shultz conveys information but what information he chooses to convey. Much will remain a mystery. The things Shultz leaves ambiguous and what he clarifies is part of what makes It Comes At Night so compelling. There was information that I thought I wanted about these characters and their situation that I was ultimately glad I never got and other information that I didn’t expect that brought the film to life in unanticipated ways. Even the title is an indication of the film’s relentless uncertainty. It sounds like a bad title, more indicative of a schlocky horror than the film Shultz has made. Or perhaps it is just another element of It Comes At Night that deserves pondering. How rare is a film that trusts its audience’s ability to think for themselves and fill in the gaps.


In a disappointing year of cinema, It Comes At Night has revitalised my enthusiasm for the medium and reminded me of why I love film the way I do. It is one of the most wonderfully compiled movies in recent memory. To appreciate it will require you noticing the choices that the filmmakers have made, and not merely appreciating the film as a whole. It is a film of immense style, even if that style is not instantly conspicuous. Shultz says more with where he decides to cut and who he decides to cut to than most filmmakers. I was shaking with excitement when I left the cinema. I am off to the press screening of Spider-Man: Homecoming in a few moments. I won’t be thinking about anything else than It Comes At Night.