"July's characters tend to be severely misshapen souls trying to negotiate the finer details of day-to-day existence and relationships."

"Just when you think you might be feeling off-beaten to death, as it were, July throws something totally unexpected into the equation."

Miranda July is 20 years too old to play the protagonist in her new film, Kajillionaire, but 20 years too young to play the protagonist’s mother. That leaves the writer-director-actress-performance artist off screen this time around, and her absence is noticeable. July’s third feature is the first she has directed since 2011’s The Future, and it’s the first overall in which she does not star. Evan Rachel Wood does her best with the role July would have certainly played had she been younger, but July’s persona as a performer has been a big part of why audiences hungry for her unique brand of arthouse eccentricity have embraced her. While having her behind the camera makes up for some of that, it leaves Kajillionaire in third place overall among her efforts. 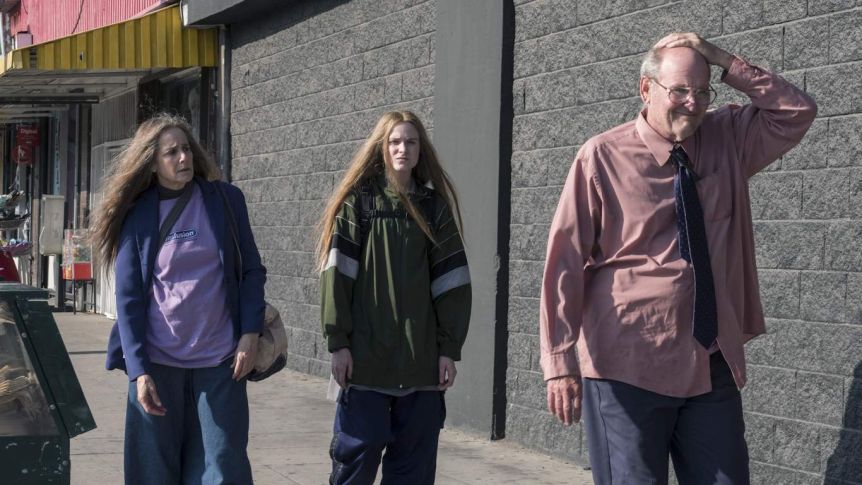 Fortunately, July is a good enough filmmaker that this makes for a very respectable bronze medal. Kajillionaire is the latest in July’s career-long fascination with quirky existentialism. Her characters tend to be severely misshapen souls trying to negotiate the finer details of day-to-day existence and relationships. The stories bear the contours of normal narrative, but they are sprinkled with Dadaism and interpretive dance. Her debut, Me and You and Everyone We Know, featured a young boy who gets involved in a graphic chat room, and a sad man who sets his arm on fire for no apparent reason. The Future is narrated by a dead cat, whose squeaky voice comes courtesy of July. These details may sound morose, but July infuses her melancholy with a kind of strangled optimism, leaving a viewer hopeful.

Her Kajillionaire entry point to the desperate lives of the dispossessed is a family of grifters living in an office building fit to be condemned. They pay $500/month in rent to the proprietor of a bubble factory, whose product oozes down their inner walls at regular intervals during the day, requiring them to scoop it out of the way with rubbish bins. It’s a workable arrangement considering that they have no income other than what they can scrape up through a series of flimsy scams, including postal theft and the forgery of cheques from the oblivious elderly.

The bigger problem, at least for Old Dolio Dyne (Wood), is not that her family has no money to spare, but that they have no love to spare. Her father Robert (Richard Jenkins) and mother Theresa (Debra Winger) demonstrate none of the affection expected of parents, seeing Old Dolio only as a third conspirator with whom they share any ill-gotten gains. At age 26, Old Dolio has grown tired of this existence, but has also been raised almost completely without the ability to function in a socially relatable way. (As an indication of just how long this has been going on, Old Dolio’s parents named her after a dying lottery winner in a failed attempt to ingratiate themselves into being remembered in his will.) In the midst of one particular scheme involving claiming the insurance on lost luggage, they meet Melanie (Gina Rodriguez), a fellow passenger Robert and Theresa chat up while trying to ride out a moment of turbulence. Melanie may be what they all need, for different reasons.

We may not see Miranda July on screen, but we know we’re in a Miranda July movie nonetheless. The Dyne clan is a dilapidated one, characterised by untucked clothing, hair that’s five years overdue for trimming, and the type of darty, feral eyes of both con artists and wounded animals. It would be sadder if it weren’t also so funny, which gives you a sense of the type of tone July can achieve at her best. Their meagre means for making a buck are, in a way, those of a family a broken America has left behind. But when we see each family member contort their bodies in different ways to avoid detection while passing a low fence that separates them from their landlord – the parents crouching forward, Old Dolio backward as if skittering under a limbo pole – you can’t help but have a chuckle over the apparent glee with which these people have adapted to their circumstances. 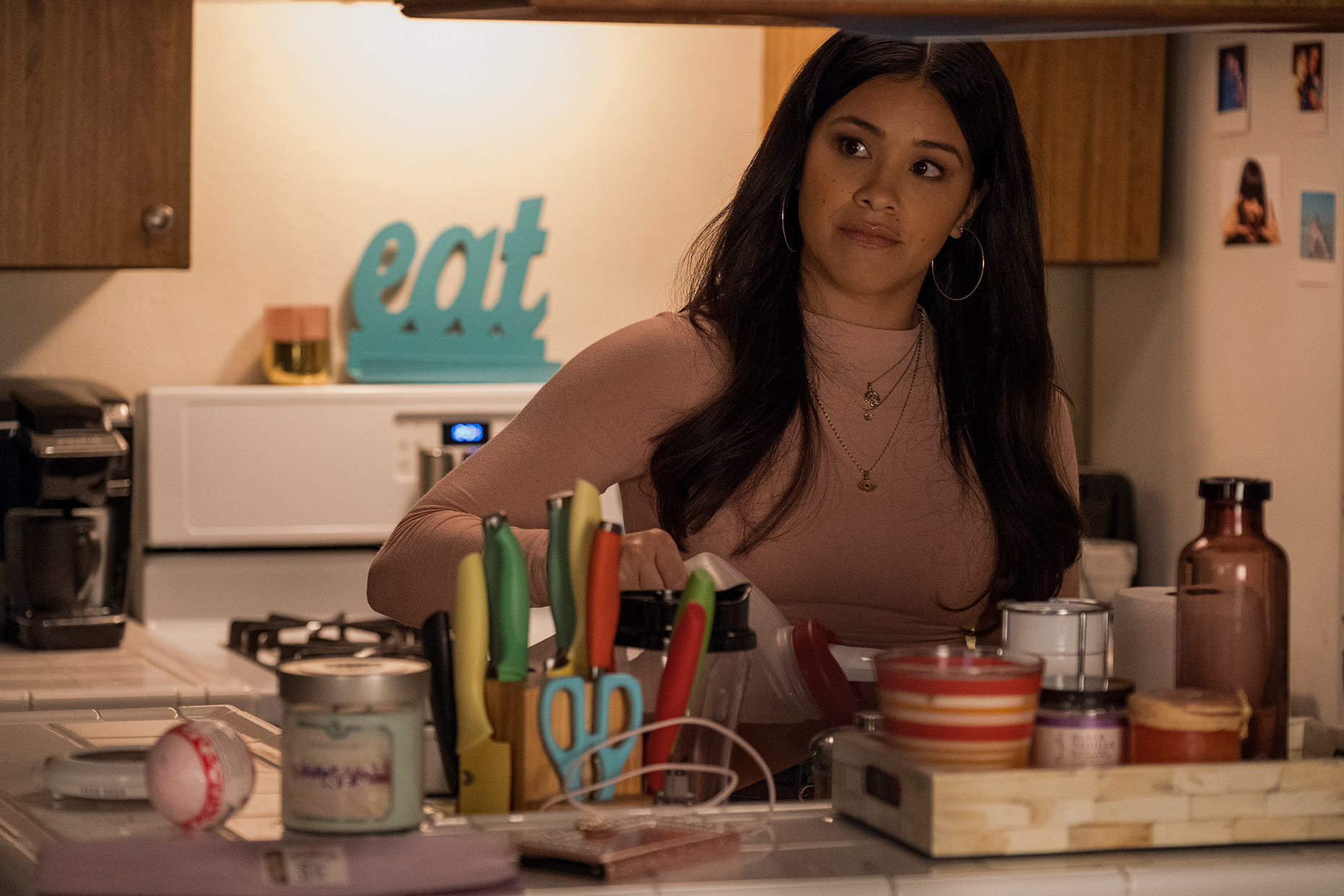 Just when you think you might be feeling off-beaten to death, as it were, July throws something totally unexpected into the equation. That’s Rodriguez’ Melanie. She’s an eccentric in her own right – she’d have to be to take up with this gang – but she’s got a mainstream eccentricity, which might be characterised as a lust for life. She’s talkative and socially engaged, and as she favours outfits that leave her midriff exposed, she is constantly being hit on by men. In other words, she’s functioning fine in normal society – but something about the Dynes triggers her sense of curiosity, her sense of experimentation, or maybe just her latent manic pixie dream girl.

Melanie is the key ingredient allowing Kajillionaire to be as profound as it sometimes is. As just a kind of navel gazing, as it were, at the strange affect of these human cockroaches, the movie would quickly tire us. Splash in Melanie, though, and suddenly there’s another vector of unexpected crazy. As the four test-drive an empty hot tub in the hot tub store – a ludicrous consideration for a family three months behind on their rent – it gives you a true appreciation of the lens through which July observes the world. 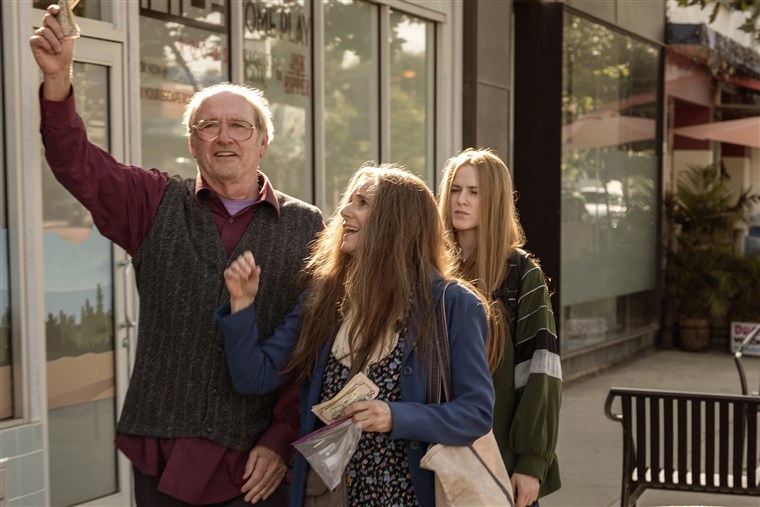 And you can get another from her aforementioned dabbling in existentialism. Kajillionaire is, for the most part, executed within the constraints of realism. But there’s one moment that reminds a viewer of the emotional centrepiece of The Future, in which two people are frozen in time right before they are about to break up. It’s an attempt by one of them to forestall the inevitable, and it involves the very commandeering of space-time to do so. Kajillionaire captures that same feeling of being between the before and the after, that fleeting now that is always already gone.

Kajillionaire is currently playing in cinemas.