Eleven or twelve years ago, Kick-Ass 2 might have been my favourite movie. Jeff Wadlow’s follow up to Matthew Vaughn’s 2010 surprise hit is the stuff of an adolescent boy’s most vivid dreams. It’s got violence, swearing, nudity and superheroes. It’s even got Jim Carey. Unfortunately, as I’ve gotten older, a smorgasbord of awesome just isn’t cutting it like it used to and Kick-Ass 2, more so than the original, feels like a wasted opportunity.

The idea of superheroes existing in a real world isn’t a new one, but it’s an intriguing one, and certainly full of potential. ‘Real world’ is a loose term here, and only real in the sense that a spider bite won’t give you superhuman strength and agility. It’s also unlikely that any of the characters in Kick-Ass 2 will ever hear about the planet Krypton. So what happens when real people don masks and emulate the heroes and villains that Western culture has been so fervently revering recently? I’m inclined to believe they would be nipped fairly swiftly in the bud by authorities. In Kick-Ass 2, they get away with murder, quite literally.

And therein lies the film’s biggest problem. Matthew Vaughn’s original was hardy Tolstoy, but there was at least a degree of consideration behind all the mayhem. Despite the colourful costumes and outrageous action, there’s no sincere interest to be found in Kick-Ass 2. It’s a tricky complaint to make about a film that probably isn’t intended to be anything more than light entertainment, but I couldn’t help but feel let down, especially considering the wealth of opportunity the filmmakers (and prior to that comic writer Mark Millar) had to make something really special. 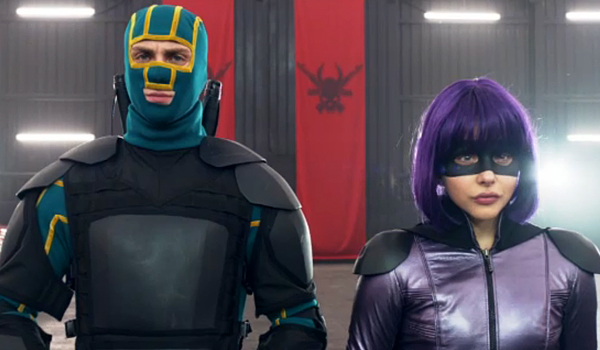 There are so many questions that are naturally raised by the subject matter. This a world where ordinary people are really going out and exacting vigilante-esque justice on undesirables. Regrettably, none of the actions in Kick-Ass 2 are met with realistic consequences, which means that despite what the cast and crew may have you believe, at the end of the day Kick-Ass 2 is just another comic book film. And it shouldn’t have been.

It shouldn’t have been in the sense that we already have too many average comic book films to count on ten hands. Kick-Ass 2 (and Kick-Ass 1 for that matter) had the opportunity to explore how classic comic book conventions could affect a realistic scenario, and not the other way around, which is what these films do. Despite the setting, Kick-Ass is really just Spiderman with no powers. Wadlow doesn’t dwell on motivations, which is a tragically lost opportunity.

The performances are strong but hindered by poor filmmaking. Jim Carrey could have been amazing as Colonel Stars and Stripes, but his character is never really given much time to make much of an impact. There’s nobody here with the same spark as Nicholas Cage’s (I never thought I’d write that) Big Daddy in the original. His absence is felt. I think I counted at least five slow motion pans to Cage’s armour from the original.

Aaron Taylor-Johnson and Chloe Grace Moretz both do an admirable job with the minimal material. Christopher Mintz-Plasse, who’s never had a robust onscreen presence, is surprisingly adequate as the main villain. Donald Faison from Scrubs was extremely entertaining as Doctor Gravity, an enthusiastic superhero with an extremely misleading moniker.

The film is violent, and unsettlingly so. There are many who really enjoy gratuitous violence on film and all the best to them, but I do not. The violence isn’t so much of a problem as is the silly tone it’s associated with. There’s such a cartoonish quality to the film that it’s disconcerting when somebody is suddenly dismembered, or someone threatens rape quite seriously.

Kick-Ass 2 is what it is. I wasn’t offended by it in the slightest, nor was I entertained by all that much of it. Real fans of the original may enjoy it more than I did. Wadlow’s film is not a terrible way to kill to hours, but anybody looking for something that really makes the most of the appealing concept may not get much out of Kick-Ass 2.