The new film adaptation of Les Miserables is remarkably ambitious, regarding both source material and execution. It’s based on the musical by Claude-Michael Schoenburg and Alain Boublil, in turn adapted from Victor Hugo’s novel of the same name. The musical has grown into a phenomonan since its intial 1980 run, now one of the most oft performed musicals all around the world. Director Tom Hooper isn’t the first to attempt to film the difficult story, but he is the first to tackle it in musical form on such an enormous scale.

The foremost issue with Les Miserables is that Hooper doesn’t seem to understand how important music is to a musical. It’s a sidenote here, whereas in the original production it was the main attraction. Unlike most film musicals, where the songs are pre-recorded and the actors lip-sync, here all the music was recorded live on set. The idea, I suppose, was to give the film emotional immediacy. Instead, some of the fantastic musical moments of the original production are brutalised by innappropriately realistic delivery. At one point, the person sitting next to me inquired sincerely ‘Is this a song?’, during what would have been one of the  highlights of the original production. 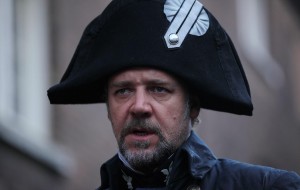 Musicals are inherently fantasy. In the best film musicals, like Chicago (2002) or Singing in the Rain (1952), when characters burst into song we don’t mind because there’s always a sense of self awareness. The realistic tone to Les Miserables makes much of the singing seem absurd, not helped by the fact that the filmmakers have added spoken dialogue to a musical in which there is none.

Hooper isn’t able to tread the line between gritty and epic without sacrificing clarity of tone. There are moments of almost ugly realism followed by sweeping fantasy. They might have worked individually, but feel odd when jumbled together, as if the filmmakers struggled with deciding what note to strike. There is also one of the most bizarre sewer scenes ever committed to film in which Hooper seems determined to highlight the amount of sewerage the characters are treading through, ending with Jackman’s eyes as the only feature visable through a thick layer of shit. 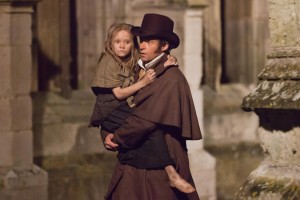 The cast do an honourable job, but struggle to make much of an impact amidst such thoughtless filmmaking. Hugh Jackman comes off the worst as protagonist Jean Valjean, and has a suprisingly bad voice. I enjoyed Russell Crowe as Javier, who manages to inject some emotion into his songs despite his weaker singing voice. Since Les Miserables is a musical, it’s the cast who can really sing who come off the best. Samantha Barks (Eponine) Aaron Tveit (Enjolras) and Eddie Redmayne (Marius) are standouts. Anne Hathaway is also quite good as Fantine, although Hooper’s treatment of her most famous song ‘I Dreamed A Dream’ is unfortunate.

The camera work is incredibly off-putting. Hooper’s visual asthaethic was one of the better things about his 2010 Oscar-winning The King’s Speech, but here it comes across as unnecessarily flashy and thoughtless. There are films that benefit greatly from overt style, but this is not one of them. There needs to be some certain degree of faith in your source material when dealing with something like Les Miserables, but Hooper doesn’t seem content to let the music speak for itself. Why film the characters from a 45 degree angle in a film like this when a straightforward shot would suffice? The excessive use of handheld camerawork is also completely innappropriate and distracting. 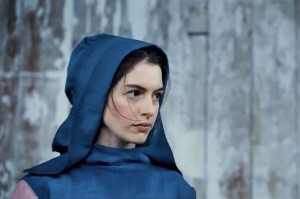 The film is not completely terrible, although anything of value here is in spite of the filmmakers, not because of them and is credit to the strength of Schoenburg and Boublil’s original production. The stage production may also be Les Miserables‘ greatest problem, I just can’t imagine any film adaptation living up to it. Hooper is not a bad filmmaker and he makes some brave decisions here, they just don’t work. There are few filmmakers who could do Les Miserables justice on screen, and Hooper is not one of them.

There will be people who enjoy Les Miserables, perhaps a lot of them, but it’s the lesser companion of the stage production. Filmmakers seem intent on adapting properties that really don’t need to be put to film. It suggests an assumption that film is the final artistic medium whatever the story, and this just isn’t the case. The musical version of Les Miserables will never be better than the stage production, so why even try?