"Blunt might have been better served appearing in this century’s cultural equivalent of Mary Poppins than in a Poppins reboot. "

"Mary Poppins is an interesting role for an actress. Though it involves singing and dancing, it doesn’t require much in the way of actual acting."

If all British girls of a certain age grew up wanting to be Mary Poppins, then perhaps all British actresses of a certain age grew up wanting to be Julie Andrews. In the space of two years in the mid-1960s, not only did Andrews star in Mary Poppins, but also in The Sound of Music, cementing her status as an aspirational figure for all kind of aspirants. If the sequel to Mary Poppins had been made at another point over the past 50 years, we might have seen the torch passed to someone like Emma Thompson or Kate Winslet. As it’s been made in 2018, 35-year-old Emily Blunt is the heir apparent – the winner of the contest, I suppose.

It’s a good prize for your resume, to be sure, but Blunt might have been better served appearing in this century’s cultural equivalent of Mary Poppins than in a Poppins reboot. If it hasn’t been already, Disney is on the verge of getting pummelled for dredging up all its old intellectual property for modern remakes. In just the first half of 2019 we’re getting new versions of Dumbo, Aladdin and The Lion King. Mary Poppins Returns feels like it’s been made for less cynical reasons and with a purer heart, but it’s difficult to escape the notion that it’s just more product being pumped off the assembly line. 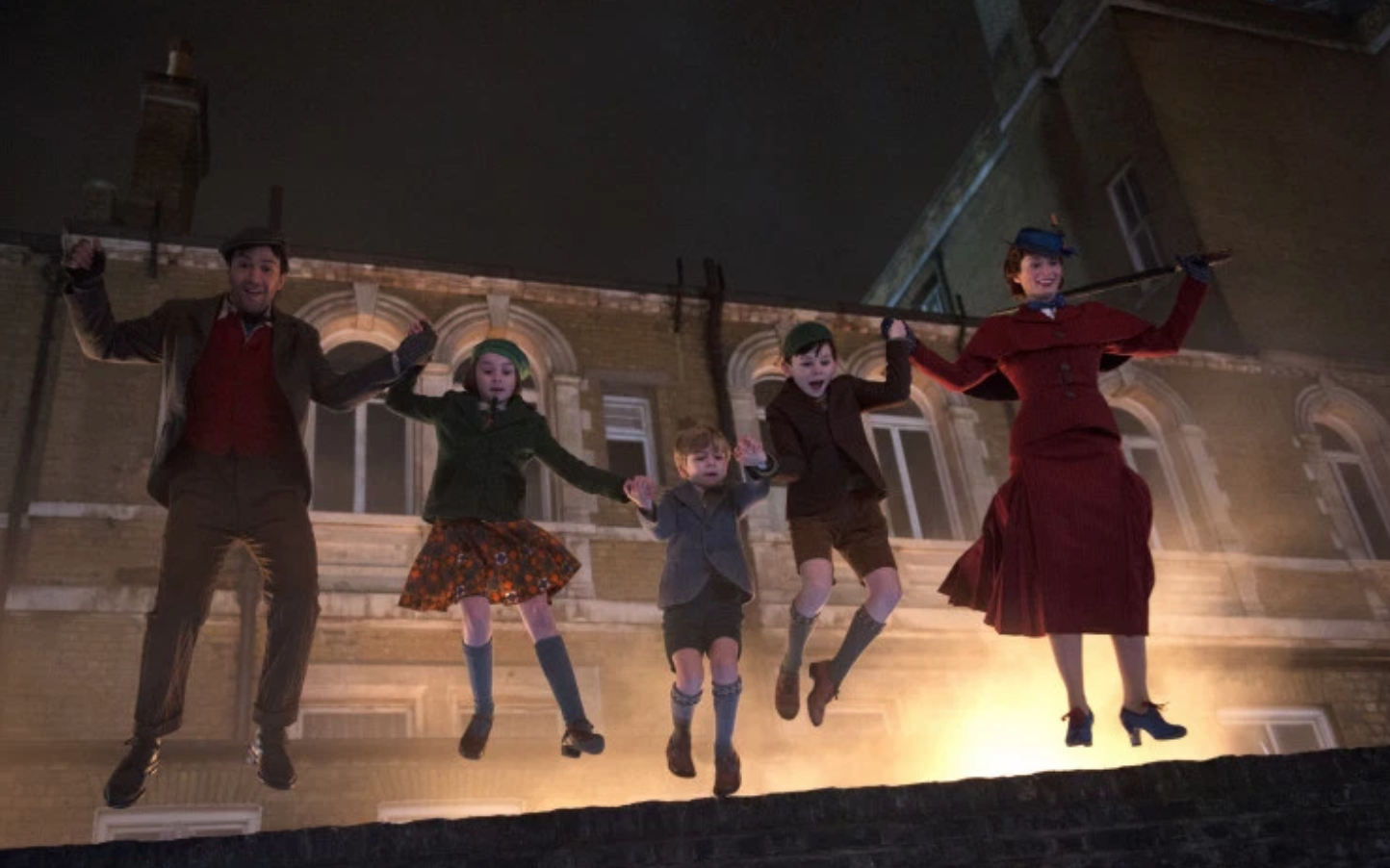 Mary Poppins is an interesting role for an actress. Though it involves singing and dancing, it doesn’t require much in the way of actual acting. The character is permanently fixed with an expression somewhere between bemused and imperious. She doesn’t get too worked up about anything, and when she gets dressed down several times during the narrative, neither does she evince much shame. You might say Blunt’s greatest contribution is that she looks the part. She is, however, more than capable as a singer and a dancer, and looking the part also gives her the presence to become an icon on the cinematic landscape if the film ultimately endures.

More specifically brought on board to sing and dance is Lin-Manuel Miranda, the absurdly talented creator of the stage hit Hamilton. Miranda did not write the catchy Mary Poppins Returns songs, as he did in his first Disney collaboration, Moana. That duty went to Marc Shaiman, who was assisted on the lyrics by Scott Wittman, and dammit if the songs don’t accomplish that increasingly rare feat of traveling with you out of the theatre. Miranda certainly deserves his share of the credit for making songs like “Underneath the Lovely London Sky” and “Trip a Little Light Fantastic” into earworms, as his Dickensian lamplighter kicks his legs and swings from lampposts while belting out the tunes.

That’s one of many elements that align this with the type of classic Hollywood musical that was just winding down at the time of the original Mary Poppins. Director Rob Marshall has been tasked with keeping that impulse alive in the 21st century, something he did with great success in the 2002 best picture winner Chicago. He tried without much success in 2014’s Into the Woods, also starring Blunt. Mary Poppins Returns is closer to Chicago on that spectrum, but not as close as one would hope.

The story catches the characters in 1935, 25 years after the events of the original film. Michael and Jane Banks are now adults (portrayed by Ben Whishaw and Emily Mortimer), and a despondent Michael is on the verge of losing the family home in the same year that he’s lost his wife to an illness. He can’t repay his bank loan and he and his three children face eviction. It’s just then that Mary Poppins descends from the skies, in possession of the very kite that factored into the original film, which Michael found in the attic and left in the bin on the curb. Michael no longer believes in the magic of his childhood, but his children may – and Mary is here to kindle that magic. As well as providing, you know, your standard nanny services. 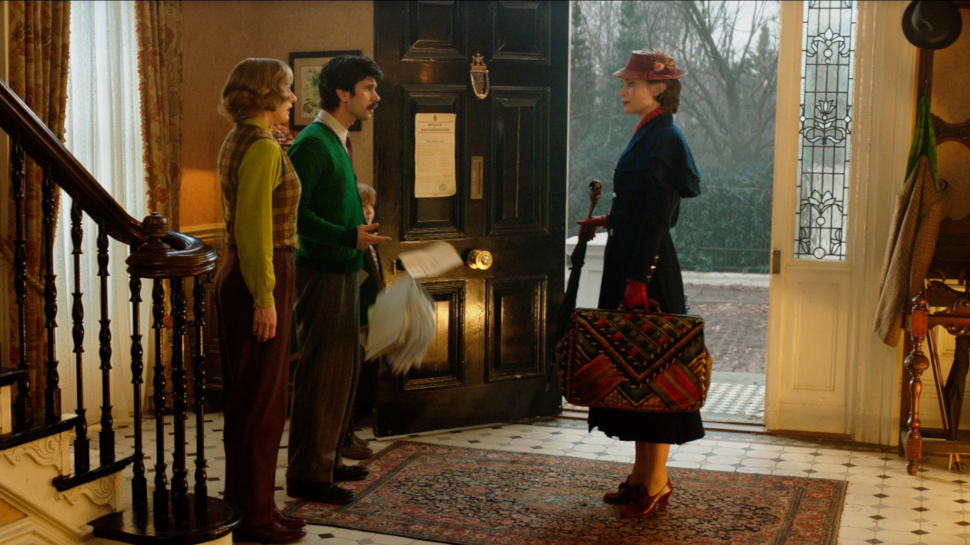 What follows is a fairly generic “save the house from the evil bankers” story, with a lot of diversions into musical numbers built in. Like, a whole lot. The trouble with Mary Poppins Returns, which distends it well past the two-hour mark, is that the movie is seriously top heavy with these musical numbers, few of which relate in any direct way to the thin story.

The numbers themselves are pretty involving, showcasing some lively choreography by Marshall and some lovely visual effects. Mary and the children descend into an aquatic wonderland through the bottom of their bathtub, and there’s an extended sequence set inside the scene painted on the side of a Royal Doulton bowl with a chip missing from its rim.

This last sequence showcases the film’s weaknesses as much as its strengths. The kids are in that bowl for something like 20 minutes, which includes three musical numbers. It’s all because they want to sell the bowl to help pay for the house, but in the very next scene, the bowl is revealed to have little value. That may be the film’s worst scene, a truly pointless number starring Meryl Streep as a craftswoman of indeterminate Eastern European origin, whose house inexplicably turns upside down when it feels like it. A case of vicarious vertigo won’t be the reason audiences are squirming in the seats at this point. Boredom will be the better explanation. 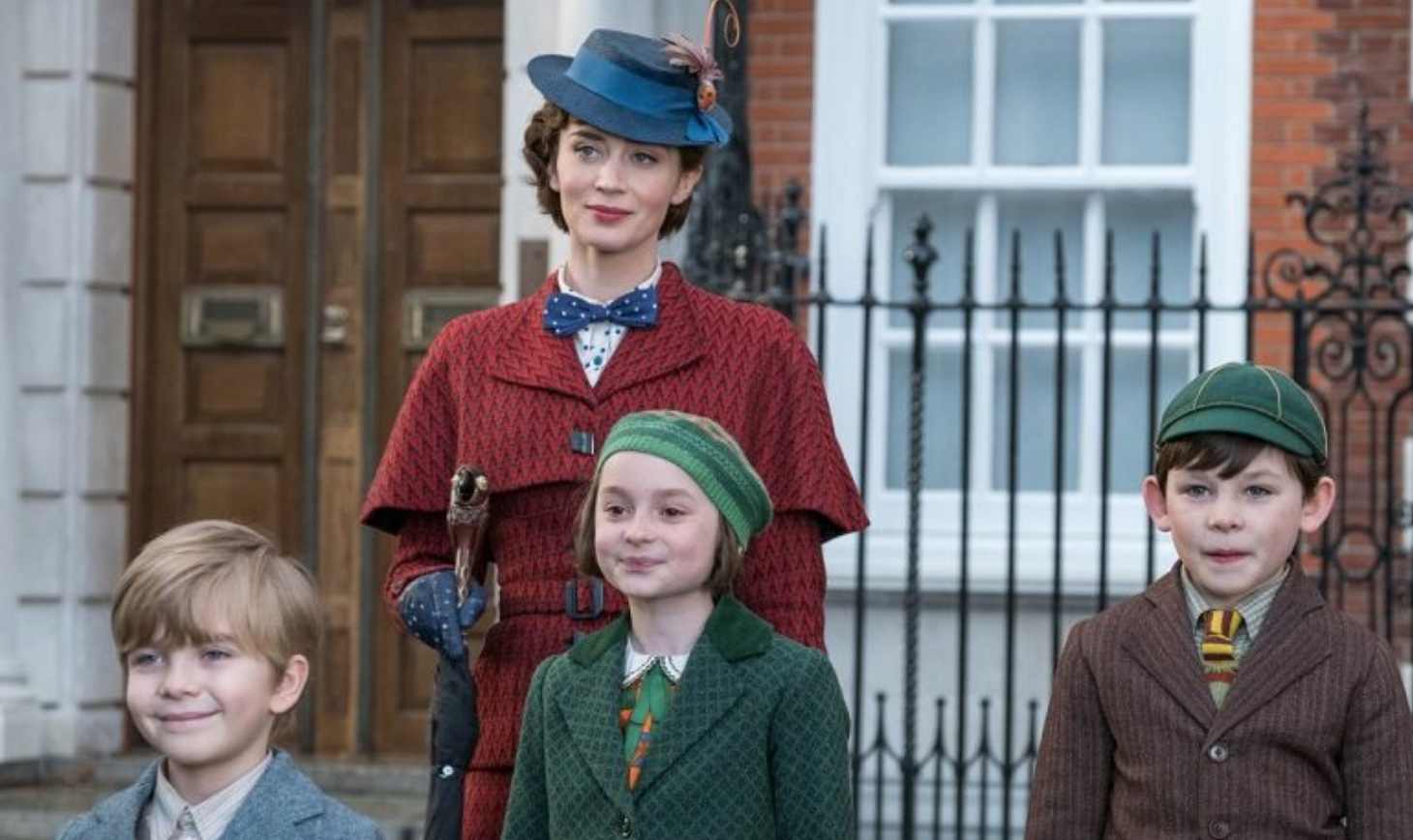 The film regains some momentum after a slow middle patch, helped by a lively number involving lamplighters on bicycles and Cockney rhyming slang. Eventually we’re steered toward a showdown at the bank and an attempt to beat a midnight deadline to save the house. The epic scope of the production comes back to the fore in the form of a climax involving Big Ben, as well as a delightful finale in the park. Though the details of that finale are worth saving as a surprise, it’s one of many ways the film perfectly understands the giddy logic of the Mary Poppins universe.

The sad reality is that the Mary Poppins universe is not the unique landscape it was in 1964. Every third movie released in the late twenty teens is presenting some kind of magical environment, fully infused with the best (or maybe worst) that CGI has to offer. Mary Poppins Returns gains some distinction from the ways it hearkens back to musicals of old, quite successfully in many instances. As far as movie magic goes, though, today’s audiences have been turned into grumpy Michael Bankses, unsure if we still believe in it.