“The real director of our life is accident,” quotes Jeremy Irons’ character, Raimund Gregorius in Night Train to Lisbon. Accident, interpreted here to be synonymous with ‘chance’, is the driving force of the film, particularly in relation to chance encounters and the way in which humans move in and out of one another’s lives unbeknownst of the profound effect they may have caused to that person’s timeline of life events.

On his way to work one day as a high school Latin professor in Bern, Switzerland, Gregorius, clad in typical professor tweed, corduroy and clunky spectacles, rescues a young woman from jumping to certain death off the Kirchenfeld Bridge. After walking in the rain with Gregorius all the way to his classroom, the woman mysteriously disappears, leaving behind her vibrant red leather jacket, containing a book in its inside pocket. From the pages falls a ticket to Lisbon, Portugal, leaving in fifteen minutes. Upon finding this, Gregorius, races to the train station hoping to find the woman and return her jacket and ticket. Since she is nowhere to be seen on the platform, Gregorius spontaneously jumps on board, luggage-less and having left his Latin students hanging.

The train ride to Lisbon gives Gregorius plenty of time to read the book in the woman’s jacket, which just so happens to be a tome of the philosophical musings of a Portuguese doctor named Amadeu de Prado (Jack Huston) who lived during the dictatorship of Salazar in the 60s and 70s. Profoundly moved by the writings, Gregorius becomes determined to track down the doctor and find out his fate. His search leads him to unravel the mystery of a tragic love triangle amidst the dangerous times of the Portuguese revolution. 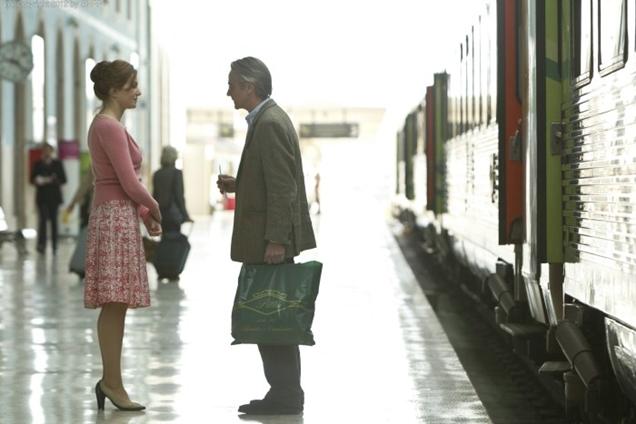 For a story about passion and betrayal during a time of political revolution, and upheaving one’s life in order to follow the intrigue of an untold mystery, Night Train to Lisbon is really quite tame. The story is revealed at a plodding pace through conversations Gregorius has with characters he finds are associated with Amadeu’s story, including his possessive sister Adriana (Charlotte Rampling), a Catholic priest (Christopher Lee), a fellow Resistance member, João (Tom Courtenay) and finally, the other two points in the love triangle, Amadeu’s best friend Jorge (Bruno Ganz) and his lover, Estefânia, (Lena Olin, and played as a young woman by Mélanie Laurent).

The flashback scenes depicting Amadeu’s story show a revolution in Lisbon which feels about as threatening as a Gregorius’ tweed jacket. With the exception of one slightly violent interrogation scene early in the film, the presence and cruelty of the dictatorship is never felt. We simply watch as the Resistance members have secret meetings and scatter themselves through the cobbled streets of Lisbon, hiding in dark alleyways from police cars. But for what? We don’t really know.

Similarly, the love triangle between Amadeu, Jorge and Estefânia is dull and unconvincing. The gorgeous Laurent, here almost unfamiliar with brown hair and brown eyes, does well with what little she has, however there is a lack of fiery lust, longing or heartbreak between any of them, which is what you might expect from young people impassioned enough to risk their lives for freedom from a cruel regime.

The widescreen cinematography captures the stunning seaside cliffs, hilltop city views and winding cobbled streets of Lisbon quite beautifully and the philosophical musings punctuating the unravelling mystery in Night Train to Lisbon are thought provoking. There are some enjoyable performances of supporting roles big and small from Lee, Laurent, Courtenay, Ganz and Rampling, and Irons as Gregorius is endearingly charming. As a man who was accused by his ex-wife as being “boring”, it is sweet to watch him become invested in Amadeu’s story and slowly open up to his optometrist love interest, Mariana (Martina Gedeck).

By and large however, Night Train to Lisbon is in want of some guts. It’s missing the passion and fire which is enough to cause best friends and lovers to betray one another, to make a group of young people rise up against an oppressive government, and to prompt a teacher to be so intrigued by a story as to leave his students mid-class, leave his life behind and jump on a train to another country. Chance and fate can indeed be powerful forces, but the effects of their intervention in this film were not as dramatic as their potential in the realm of cinema allows.