The great thing about a magic trick is that behind all of its mystery there is some layer of reality that draws us all into the trick. It both fascinates us and the same time intrigues us into searching for the solution. The investigation into the solution is the entire reason a magic trick seems fantastic and mysterious. By searching for the solution, the audience of a magic trick is drawn into its hoax. Now You See Me, directed by Louis Leterrier, who is most know for directing big action blockbusters such as Transporter, Clash of the Titans, and The Incredible Hulk, delivers a magic trick that both captivates and charms its audience with an elaborate deception. Just don’t expect it to be anything more than a fun trick.

Now You See Me follows in the similar narrative footsteps as some of the most renown heist films to be released over the past decade. Most notably, its storytelling style is reminiscent of Ocean’s Eleven, where the heist is played through and revealed at the end of its course. Everything seems extraordinary and out of this world until the curtain is pushed back and revealed as a mere trick. This style of narrative is intriguing and yet unoriginal in its delivery of a heist film. Sprinkled with action sequences, car chases, comedy, and a bit of romance, it is understandable why a director such as Louis Leterrier (with a history of making films containing this same formula) would direct a film such as this. Don’t get me wrong, this is not a bad film, nor is it a masterpiece. It’s a film designed to be fun. 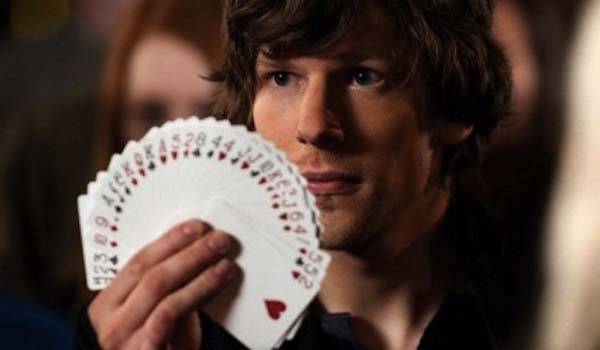 The cast of this film might be the first thing that catches one’s attention. With big names such as Morgan Freeman, Isla Fisher, Mélanie Laurent, Mark Ruffalo, Woody Harrelson, Jesse Eisenberg, Michael Caine and more, the film offers cast members that fit their characters and provides a believable experience. But no cast members are placed in roles that the audience hasn’t already seen them in. Jesse Eisenberg is still the quick chatter, clever, and quirky character. Woody Harrelson is still the smart mouthed, tough-guy comedian. And Morgan Freeman is…. Well, still Morgan Freeman. The only cast member that truly deserves recognition from standing apart is Mark Ruffalo, playing a nervous wreck of a cop who has no time for magic.

The film’s aesthetic is directly related to its overall theme of magic tricks and hoaxes. It’s very flashy at times; with big set pieces leading up to fantastic magic acts. It is during these magic show segments that the film is able to show off both its special effects and cinematography. With long swooping camera shots and flashy set pieces, these sections of the film make the more dialogue-oriented segments less amusing. At the same time, the giant set pieces and action sequences wouldn’t be as exciting if the audience were constantly flung into those situations.  It is also during the car chases and action sequences that Leterrier’s deep connection with action reveals itself. They are all nicely shot, with fast cuts, explosions, and all the ingredients necessary to make these action sequences enthralling, but it lacks something that would make it original. This leads us to perhaps the film’s greatest flaw. 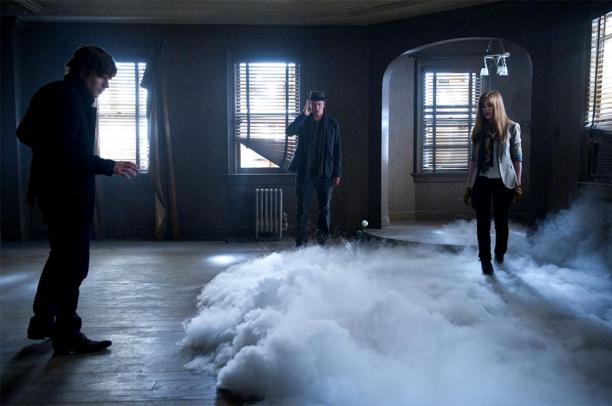 The reason why Now You See Me is not as innovative as it wants to be, is that it tries to fit a lot of genres into one big heist film. With all of its different genres drizzled over its main heist story, things can get a bit schizophrenic. It raises questions as to what parts of the film were necessary and which ones exist purely to attract a broader audience. Was the romantic spark between Mark Ruffalo’s character and Mélanie Laurent character, truly necessary to tell the story of four magician thieves? Was the high-speed car chase sequence crucial to understand what was at stake? It feels as if a lot of these extra bits were only inserted to either extend the running time of the film or to just have another marketing selling point. Moreover, this conglomeration of genres and subplots drives away from some elements that might appear important at first but are never brought up again. For example, Jesse Eisenberg’s love interest and past is revealed several times throughout the film but has no conclusion to it. By trying to add so much to the story, it ends up retracting from the important segments of the film. Even the ending, while maybe surprising to the audience, might come as a bit of a stretch in order to merely create a twist at the end. But as I said before, this is a blockbuster film targeted towards blockbuster moviegoers, and with that one must accept some of it’s ridiculousness in order to have a little bit of fun.

Jesse Eisenberg states in the beginning of the film: “The closer you look, the less you will see”. I believe that the film itself follows this same expression. If you look close, you might be enthralled and fascinated by the spectacle directed by Leterrier. Just like the magic trick, by looking close you will forget the hoax behind the trick and the flaws behind the spectacle. It will capture you’re attention with charm and magic, if you allow it to. Just make sure not too look at the big picture. If you do, you might just see the fumbles and failures behind this magic swindle.