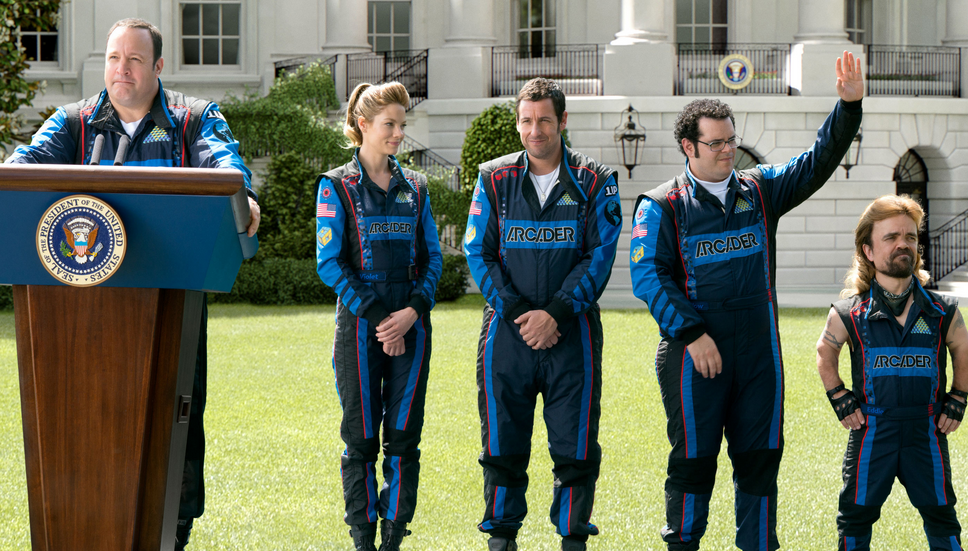 And Sandler wept, for there were no more brain cells to conquer. If you pay to see Pixels then you’re part of the problem. You’re actively endorsing Adam Sandler’s relentless campaign to increase his estate while he attacks our quality of life. With every new Sandler film we watch, our soul becomes worse. Part of it might be that I’m out of touch, or that I’m too old now for Sandler’s brand of humour (I’m using the word ‘humour’ here to denote intention, not actuality), but that’s not the whole picture. I’m grateful for Sandler’s early career as much as the next man (unless the next man is Rob Schneider) but it’s been almost twenty long years since Happy Gilmore and Sandler has been making films that entire time. For every Happy Gilmore there are dozens of I Now Pronounce You Chuck And Larry’s.

Pixels is an improvement on some of Sandler’s other recent films. Let that sink in for a moment. In an era that has engendered Jack and Jill, Grown Ups (and Grown Ups 2), That’s My Boy and You Don’t Mess With Zohan, this is what it’s come to. Pixels is every Adam Sandler film, there’s just more CGI. Schneider is nowhere to be seen, but Kevin James is. Kevin James, along with Ryan Reynolds and Kevin Hart, is in my list of people who shouldn’t be richer than I am. James plays the President of the United States in Pixels. If you can buy Kevin James as the President of the United States then you’ve a far greater imagination than I do. If you can buy Adam Sandler as a mathematics genius then perhaps this isn’t the review for you.

It’s 1982, and Sam Brenner (Sandler) and Will Cooper (James) arrive at the grand opening of their local video games arcade. Sam’s a natural, and soon finds himself competing at the World Championships. Flash foward thirty or so years later and Sam is forced to use his video game expertise to save the world from aliens who are using enormous emulations of classic arcade games to attack the human race. I wish I was kidding. I wish there was more to it. There’s not. There is a beautiful woman, Violet (Michelle Monaghan), who serves almost solely as a love interest. Sandler has always been optimistic about the chances his characters would have with the opposite sex. 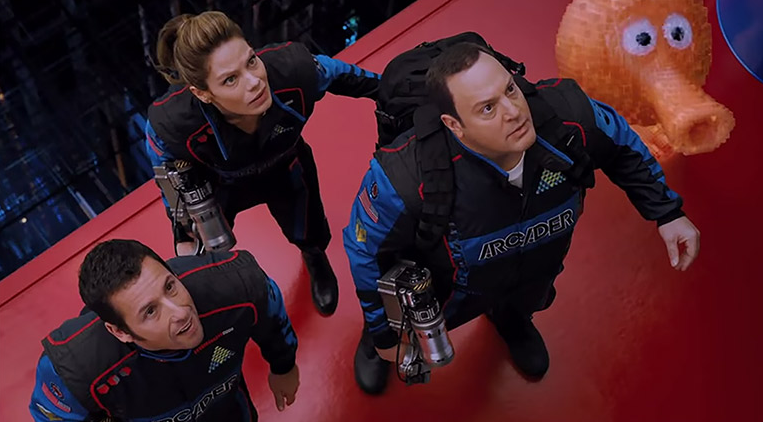 You could argue that it’s a matter of a taste. Why should you be made to feel guilty about indulging in Sandler’s sub par drivel. Because you’re the reason we fail as a race. Remember Mike Judge’s film Idiocracy? That’s your fault. In Idiocracy, an average man is left in stasis until the year 2505, when human intelligence has diminished so significantly that he’s suddenly the smartest man on Earth. The most popular television show is called Ow My Balls. We should encourage and be encouraged to aim high and expect quality. We’re stooping for Sandler and once you start stooping there’s no telling how low you’re willing to go. Scan Sandler’s recent filmography and Ow My Balls might start too seem not all that farfetched.

Pixels is not without its merits. Its two merits. The action scenes, adapting classic arcade games (which incidentally, the children that this film is presumably aimed at will not recognise) into real environments, are the funnest part of the movie. When your movie includes Kevin James dancing around with cake icing on his face, it doesn’t take much to be the funnest part of the movie. Josh Gad, thanks entirely to his natural charm, also emerges unscathed from his painfully conceived character. Somehow, Gad makes yelling funny again, even though it’s a form of comedy long since exhausted (but not retired) by Sandler and Will Ferrell, among others.

Pixels was doomed from the start. It’s a film dominated by Adam Sandler and CGI, two of the most bemoaned elements of contemporary Hollywood. And yet, as I’m writing this review, Pixels is sitting at almost two-hundred million dollars at the international box office, and counting. There are some really great things out there, pertaining to all aspects of life. Why are you watching Pixels?