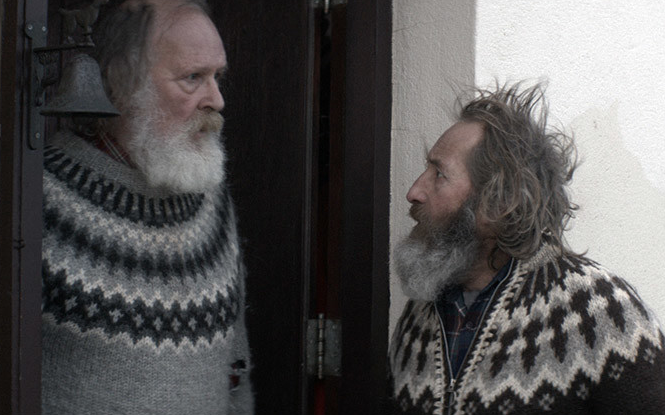 Those who think the contributions of Iceland to the world of cinema begin and end with Bjork’s appearance in Lars von Trier’s Dancer in the Dark need look no further than Wikipedia to be disabused of that notion. The site lists 50 films on its “Cinema of Iceland” page, including the 1991 Oscar nominee Children of Nature, as well as four films from Icelandic director Baltasar Kormakur, who has since moved on to such Hollywood films as 2 Guns and last year’s Everest. The most recent film to gain any attention outside of the far north Atlantic is Grimur Hakonarson’s Rams, which won top prize in the Un Certain Regard section at Cannes last year. Un Certain Regard celebrates films that are “original and different,” and it’s safe to say Rams is both.

The story takes place in a wind- and snow-swept Icelandic valley where sheep farming is the primary – and possibly only – occupation. The remote rural sheep farmers convene annually in the town centre to compare their best rams, the way prize pigs might be compared at a country fair in warmer climes, with a prize awarded to the one with the best rump, legs and back muscles. (It’s not clear whether the curvature of their impressive horns is factored in to the judging.) This particular year, a sixtysomething farmer called Gummi (Sigurour Sigurjonsson) loses out on best ram to his estranged brother Kiddi (Theodor Juliusson), a man he hasn’t spoken to in decades despite their homes being separated by no more than a couple hundred meters. When they do need to communicate, they send notes rolled up into scrolls in the mouth of Kiddi’s dog, or a drunken Kiddi sometimes screams outside Gummi’s window in the middle of the night. The narrow margin of Gummi’s loss – a mere half-point – causes him to secretly examine his brother’s prize ram, seeking imperfections. He finds a major one, as he discovers what he believes to be symptoms of an infectious sheep disease called scrapie, which is always fatal and which sometimes leads to the slaughtering of entire populaces on adjacent farms just to ensure its eradication from a particular geographical region. Gummi’s envious meddling may lead to economic devastation for the entire valley – not to mention an intensification of his personal cold war with his brother.

Rams is observed with a cultural specificity that suggests absurd comedy from the start. These heavily bearded sheep farmers wear almost identical wool jumpers, which don’t even differ in colour, and only slightly in pattern. They strap their rams on the backs of all-terrain vehicles rather than pickup trucks or other expected farming equipment. If they open their mouths at all, it’s to discuss sheep. In short, they resemble each other with differences almost as infinitesimal as the differences between first- and second-prize rams. Yet these brothers resent and hate each other for reasons we never learn, with an intensity that has no explanation, other than that certain people reserve their greatest loathing for themselves. 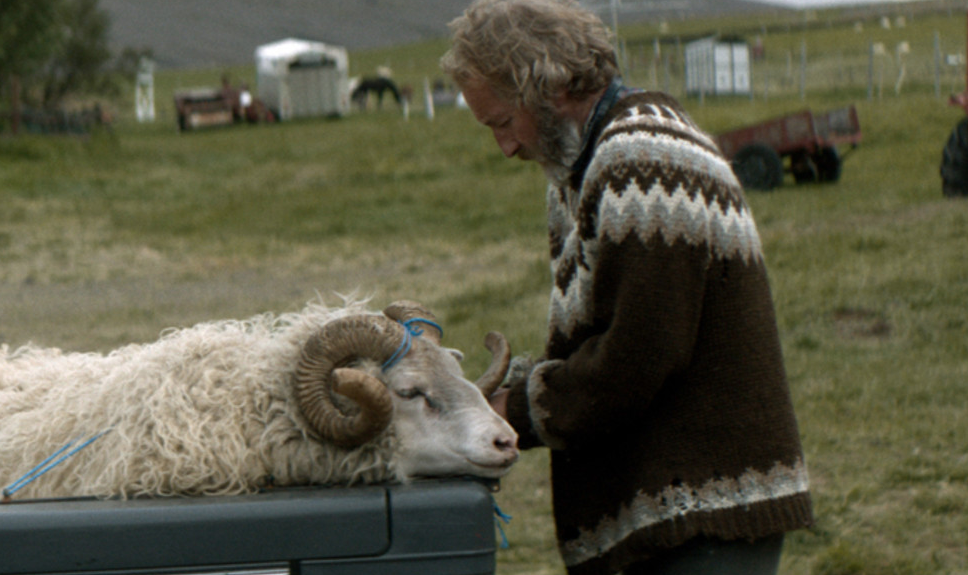 Yet this story does not stay in the realm of comedy, if it was ever really there in the first place. The competitiveness and jealousy of Gummi, our ostensible protagonist, shows a pig-headedness (ram-headedness?) that has far-reaching negative implications for all his neighbours, who rely on a healthy stock of sheep to earn their living. The film is strangely cagey on issues of cause and effect, though. Clearly it is Gummi’s bad faith investigation of his brother’s property that leads the local veterinarians to examine other sheep for scrapie, but it’s no false accusation – the sheep are indeed afflicted, which would mean their mass extermination regardless of who discovered it. However, there’s at least the implication that if Gummi had won the competition for top ram, this infestation might never have been brought to light – suggesting that it could also be a mirage, or that scrapie is difficult enough to detect that the mere suspicion of its presence is enough to warrant a mass slaughtering. In this way the medical professionals could almost be seen as the judges, juries and executioners in a witch hunt started by Gummi. The laughs grow fewer as the repercussions escalate.

The film’s most striking formal element is its cinematography. Director of photography Sturla Brandth Grøvlen expertly captures the magnificence of his sprawling landscape, which is in many respects at odds with the essential smallness and intimacy of this film. It doesn’t differ in any obvious way from other Nordic landscapes we’ve seen on film, but it has a definite majesty that towers over the proceedings. The performances of the leads are also strong, though it’s really Sigurjonsson’s Gummi with whom we spend most of our time. As this is, by nature, a withdrawn character, we measure his performance mostly in quiet moments. One of the most devastating is a restrained bout of crying after he circumvents procedure and personally assumes the responsibility of slaughtering his sheep – which are more a family to him than the brother who lives just a short distance away.

More traditional notions of family are restored as Rams approaches its conclusion, though the film remains a non-traditional burst of fresh air throughout its running time. It’s no surprise that this was such a highly regarded specimen in its own competition for top prize.