‘Samsara’ is a Tibetan word that means ‘the ever turning wheel of life’. For just over one hundred minutes, director Ron Fricke and co-writer/producer Mark Magidson attempt to explore the meaning of this word by taking us around the world and showing us an incredible vista of human life. Shot in 25 countries, on gorgeous 70mm film, over a period of five years, Samsara is a documentary that is to be felt and experienced rather than seen. It is almost overwhelming. 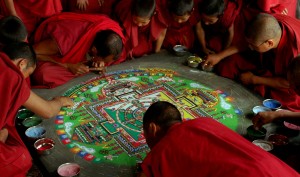 This is a documentary without spoken words or text – there is no single narrator or textual descriptions of any kind apart from the text captured by the camera. In this way, the film allows for some very personal and subjective interpretations from the audience. I for one had some very emotional responses that I don’t think I would have had if this were a film full of exposition. And I found that any exposition of that kind was unnecessary. There is a universality to the images we see that touch on common human experience and understanding.

It was almost as if, from start to finish, the film traveled full circle, in an emotional as well as physical sense. We begin in the stunning and peaceful landscape of a Tibetan monastery, where monks are creating amazing sand paintings, and from there move through some equally awe-inspiring natural and man-made wonders. It’s almost tactile, as if you could reach out and touch the images you’re seeing.  It’s uplifting, but for all the beauty that we are shown, we are shown in equal parts some of the ugliness of human nature. It’s a bit disconcerting to see such bleak images shot so beautifully, and I was brought very close to tears. But the end brought me back to a feeling of hope and joy that by then I felt I really needed! As I said above, the lack of text or dialogue leaves the audience to find their own meanings in the images, and perhaps, their own way to interpret and understand ‘the ever turning wheel of life’. In fact, it feels like Fricke and Magidson, while exploring the phrase themselves, are providing us a means of exploring it as well. 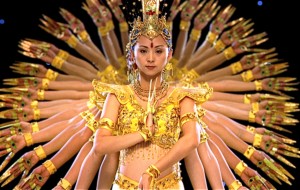 What really propels this movie forward and makes it work (I can’t imagine the film being half as compelling without it) is Lisa Gerrard’s score. A lot is said of the power of music in film. Here the music is absolutely transcendent and incredibly powerful. Samsara is as much an aural experience as it is a visual one, and it overtakes your senses completely.

To get the full effect, this is a film that absolutely must be seen on the big screen. It’s quite hard to articulate the response I had to this film, but it is without a doubt one of the best documentaries of 2012 – it also utilises a way of constructing documentary films not often seen. Samsara is released on Boxing Day, and I urge you to see it. It is a powerful and captivating experience.