There’s a degree of self-engagement in the James Bond series that has, over the years, become its greatest asset and also perhaps its biggest shortcoming. The filmmakers and the audience recognise the series’ staples; the title sequences, the tongue-in-cheek humor, the extravagant action scenes and the beautiful women. We expect them. Surely it wouldn’t be a Bond film without them. Going to see James Bond is connecting with the history of the series. It’s what makes Bond so effortlessly exciting. But it may be holding Bond back from being something terrific. What is the point in going to see something you’ve seen 22 times before?

Skyfall is the latest Bond film and for the most part it maintains the balance between the old and the new remarkably well. Technically the film is amazing. It astounds me that cinematographer Roger Deakins is still without an Academy Award. His work is consistently exceptional and  Skyfall is one of the best looking films I have seen in a long time. Deakins and director Sam Mendes, both known more for their work in drama, handle the action scenes impeccably.  There is a sense of art and creativity to Skyfall that other Bonds have attempted and subsequently failed. 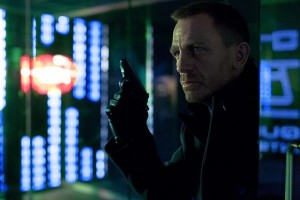 Skyfall has a coherent plot, something that can’t be said of a lot of Bond films. There is interest to the story, here functioning to give the characters purpose rather than just punctuate endless action. It’s also refreshing to see a Bond villain with a sense of rationale other than world domination. Javier Bardem’s Silva is terrific, one of the most compelling villains of the series to date. It is a shame that the weaker third act of the film gives him so little to do.

I’d also like to mention Bérénice Marlohe as Sévérigne, an associate of Silva,who I think may be may favourite Bond girl yet. There is a sense of danger, seduction and class to Marlohe’s performance that perfectly encapsulates the strengths of the series.

This is Bond with uncharacteristic talent behind the camera. There is a distinct impression that Mendes (Jarhead, Revolutionary Road) is not content to simply hit the beats. There is ambition in the direction that is initially almost distracting, perhaps because we have become used to Bond films with no creative ambition. 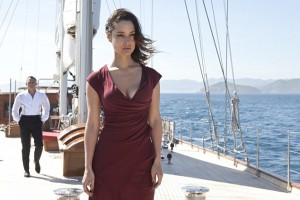 Time and age are at the heart of Skyfall. Bond is getting old, M is getting old and there’s a sense of nostalgia for Bond films past. At best, this reverence for classic Bond is where Skyfall really shines. There is a classy element to Skyfall that we haven’t seen since the Connery era. As Bond himself quips, ‘Well, I like to do some things the old fashioned way.’ At worst ,the adherence to Bond conventions offer the film’s dullest moments. It often feels as though Mendes felt obliged to have a certain number of fight scenes/one liners etc. and we are painfully aware of it every time the mood seems forced. There are few truly bad scenes, but the top quality of much of the film only works to highlight the more uninspired moments.  I do hope that Mendes is open to directing the next Bond, as he may feel more comfortable with taking even more chances and creating the perfection that Skyfall sometimes reaches.

I’d like to note that I’ve never really been a fanatical fan of the series. To me, the idea of James Bond always seemed better in theory than any of its screen incarnations seemed to suggest, save perhaps some of the earlier Connery films. With that in mind, it’s likely that those who enjoy the series will get even more out of Skyfall than I did. It’s funny how we go and see Bond no matter what trash the filmmakers throw at us. Skyfall is finally the Bond film that rewards us for our patience. This is a good film, but a great Bond film.