Stories about WWII – books and films – are abundant. They all carry, and rightly so, that same feeling of heartbreak. A person can’t help watch them without experiencing some sense of disbelief that humans could be capable of causing so much horror and grief. The Book Thief, set in the preceding and early years of Germany during the war is like all such films in that regard, but it also holds an unusual sense of hopefulness. Young actress Sophie Nélisse leads a strong cast as we are reminded of the beauty and happiness that words, books, and stories can bring us.

Liesel (Nélisse) is only a young girl when her mother is forced to give her up to foster parents. She is taken to live with Hans (Geoffrey Rush) and Rosa (Emily Watson). While Rosa is outwardly severe and “like thunder” – although quite a bit more caring than she lets on – Hans is immediately kind, warm, and welcoming. Through Hans, Liesel learns to read, and soon finds joy through reading. Together with her friend Rudy (Nico Liersch), she cultivates this passion for books and navigates her young life in the dark times of a Nazi Germany.

The Book Thief is by no means a harrowing watch, but it is gently moving. Sophie Nélisse (who has previously impressed audiences in the film Monsieur Lazhar) shows great maturity, depth and talent in her role as Liesel. Rush is quite delightful (a strange word to apply to a movie such as this, but it fits) and Emily Watson is excellent. The three work together seamlessly, but the strongest part of the film, and the sweetest relationship, is the friendship that develops between Liesel and Max (Ben Schnetzer), a young Jewish man that the family shelters in their basement. As they read together, and Max encourages the young girl in her love of books and words, they are truly able to capture a real sense of joy, even safety. 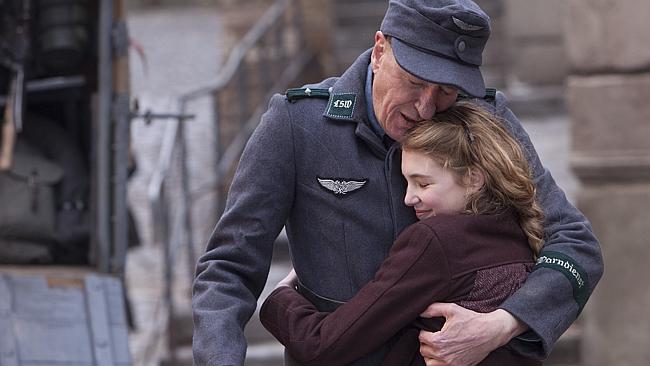 I suppose this is a rather romanticized view of the power of books and stories, and while it may easily convince and capture the hearts of those who share an equal love of reading, the more cynical may be more difficult to please. While never crossing over into anything like light-heartedness (although it has its moments of humour), the film has an odd tone. It almost feels too clean and neat for a film about WWII. However, we are witnessing events through the eyes of a child. Liesel herself does not fully witness the horrors of the war, and events such as bombings, book burnings, and people being marched through the street slowly encroach on her reality. For us, watching with historical knowledge as our context, such scenes become a strange mix of a child’s confusion and anger, and our own pang of sadness as we realise the greater significance.

This is not a devastating film, but it is often times a bittersweet one. Whilst not particularly memorable, and with a tone that feels a tad uneven, strong emotional performances lift what might have been a decent film into something that is engaging and even charming.