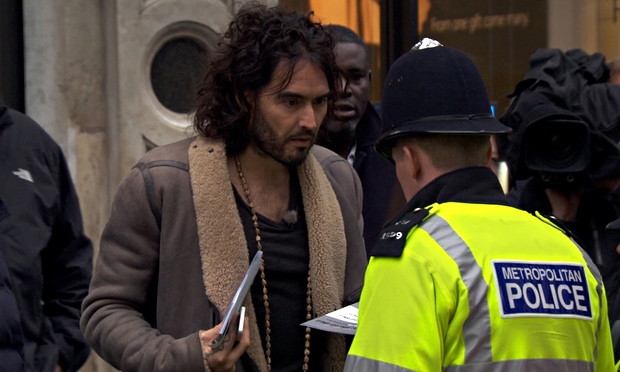 The first thing British comic-actor-activist Russell Brand tells us in The Emperor’s New Clothes is that we already know everything he’s going to tell us. This seems to be a canny way of disarming us, of admitting that this may not be the most earth-shattering non-fiction film ever made, and of recognising that the gulf between the rich and the poor has crept into most people’s awareness since the global financial crisis. If you admit your film is going to be essentially a rehash of familiar information, though, the onus is on you to find a new means of presenting it. Brand and director Michael Winterbottom seem to think this new approach entails certain key buzzwords flashing on screen for emphasis, and using cut-rate graphics that look like the colour-happy templates from a design program meant for teenagers. This visual approach is just one way The Emperor’s New Clothes fails at being compelling.

If Brand’s attempt to take down the fat cats who oppress the unwashed masses seems familiar, it’s because Michael Moore has already had a career making movies just like this one. Moore has, in fact, made a movie on this exact same topic (Capitalism: A Love Story). But The Emperor’s New Clothes more directly resembles his first film, Roger & Me, in its reliance on choices that are so glaringly indebted to Moore that Brand and Winterbottom should have submitted an annotated bibliography. Not only is this a study of how economic conditions have affected Brand’s hometown of Grays, Essex (Moore studied his own hometown of Flint, Michigan), and not only does he try to ambush CEOs of major corporations by storming the lobby and asking for an interview (Moore used similar tactics in trying to interview General Motors’ Roger Smith), but Brand even engages in the same brand of activist theatre as Moore, parading the mug shots of banking CEOs on the side of a truck and shouting their crimes through a bullhorn. Moore had already run this approach into the ground as long as six years ago, with the release of Capitalism.

This film does have the distinction of taking place since the Occupy movement began in late 2011, and some of those involved in Occupy are interviewed here. (Which, in turn, diminishes one of the film’s primary sources of originality, its focus on Great Britain.) But like nearly everything else in the film, the facts and figures are delivered at random in a massive information dump, without any sense of narrative cohesiveness to keep a viewer engaged. What Moore undeniably did, even at his most risible, was organise a clever and watchable structure for his films, to give them an identifiable forward momentum toward his biased ends. Brand unashamedly brings in the same biases and then some, but he lacks the ability to identify the most pertinent information and properly contextualize it for his audience. The film jumps haphazardly between the objects of Brand’s scorn, from bankers to large corporations to villains in the housing market, punctuating these segments with endless protest footage and the dropping of dollar figures that quickly lose all meaning. While Brand has the gift of gab – and he uses that gift almost without taking a breath – he has no gift for storytelling. That should be where Winterbottom comes in, but Winterbottom feels more like a director for hire who was moulded to Brand’s whims than a proper collaborator. In fact, given that Winterbottom’s taste in movies is usually unimpeachable, it’s unclear what drew him to this project other than doing a favour for Brand, and possibly a general sense of empathy for working class Brits. 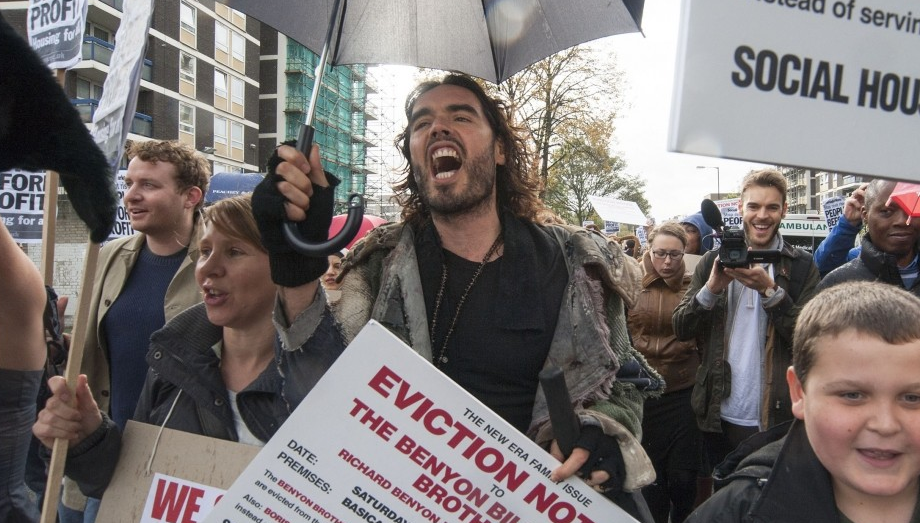 Brand himself comes off very curiously here. On the one hand, there’s no mistaking the earnestness of his transformation from a self-centered and hedonistic celebrity into a man with a burning desire to change the broken system around him. On the other, the movie remains fixated on cultivating our impression of him. The camera goes to Brand constantly, taking in every moment where he holds some child of some low-income mother on his lap while nodding along with her concerns. The Emperor’s New Clothes is obsessed with demonstrating the ways Brand – who acknowledges that he himself is a one percenter – mixes freely and effortlessly with all types of people. It’s not that any of this seems less than genuine, it’s just that we get it in manipulative quantities. We see Brand participating in such and such rally and we see Brand joking with anyone from any walk of life. But the true narcissism of this film becomes clear in his repeated interactions with the fans who recognise and love him. He had an opportunity to subsume his celebrity to the cause at hand, and he botched it.

Brand’s fans may be more curious about the following question: Is he funny? The answer is that he’s reasonably funny, but it’s not a difference maker. He does regularly take the piss out of himself, but that’s cold comfort when he does it so regularly that it becomes just another expression of his own self-involvement.

With all the legitimate complaints one can mount against The Emperor’s New Clothes, it would be easy to forget that it’s actually trying to do something good. That ultimately is what saves it from being a disaster. There are a couple occasions where the metaphor chosen to explain wealth disparities hits home, or Brand conducts a clever social experiment that produces the desired effect. For a sheer compendium of injustices committed by heartless or oblivious rich people, it’s all there. It’s just that, as Brand himself says, we knew all this before. Any familiarity on the viewer’s part with the coverage of Occupy Wall Street, or with Moore’s brand of in-your-face truth-telling, renders the movie even more redundant. That’s not an equivalent sin to those committed by the financial titans Brand loathes, but neither is it something to celebrate.