John Lee Hancock’s The Founder shares a number of similarities with David Fincher’s The Social Network, not least the fact that both films depict the growth of one of the largest corporations the world has ever seen and the morally dubious way in which that growth occurred. Because of its subject, The Social Network was able to comment on the evolving nature of communication and personal interaction. McDonald’s, the main focus of The Founder, begets more of a depressing reflection of our need to consume junk food quickly. Perhaps it’s because Fincher is capable of greatness that he was able to work timeless ideas into a movie about something that might possibly become a footnote in history. By contrast, Hancock has demonstrated little more than dependable adequacy throughout his career. Hancock is a good filmmaker, but Fincher is a master.

The final significant difference between The Social Network and The Founder is the depiction of the central characters. As ruthless as the fictional version of Mark Zuckerberg was, his actions were always at least a little bit understandable given his nature and social capacity. Ray Kroc, the man who purloined the McDonald’s franchise from the actual McDonald’s brothers, is just a bit of an arsehole. The Winklevoss twins are subject to Zuckerberg’s hard-heartedness yet they garner little sympathy. Watching Ray Kroc hoodwink the MacDonald’s brothers its heard not to feel that you’re witnessing a monumental and disheartening turning point in American history. 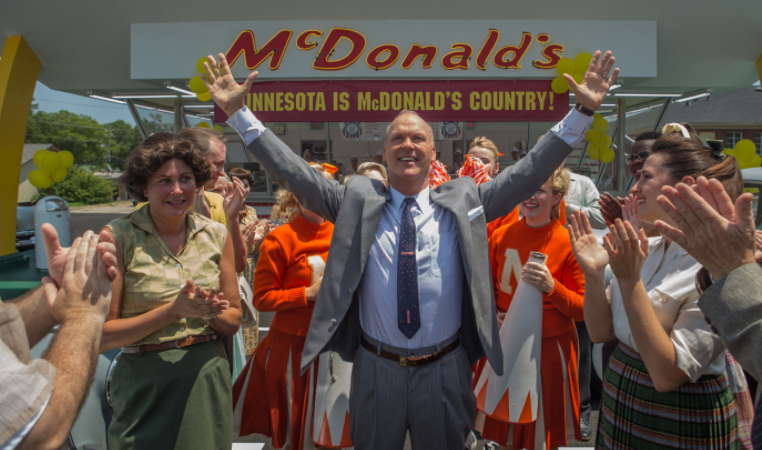 Kroc, as played by Michael Keaton, is a difficult man to watch for the nearly two-hour running time. He’s meant to be repellent, but Keaton is capable of being unwittingly unnerving in his performances so the degree to which Kroc is intentionally loathsome in The Founder is unclear. He’s a struggling salesmen, spruiking milkshake machines to disinterested diner owners. An order for eight machines from a restaurant in California piques his interest, since most restaurants normally would get by with one, or none, given the luck he’s been having. Kroc drives out to California to check the place out. It’s a burger joint, with a focus on speedy service and efficient production. The owners are to brothers, Dick (Nick Offerman) and Mac (John Carroll Lynch). Their surname is McDonald.

Kroc recognises an opportunity to rise above mediocrity. ‘Be right this one time,’ he pleads to himself. He’s right. The McDonald’s brothers are onto a winner, and it costs them. The brothers reluctantly agree to allow Kroc to manage the enfranchisement of their burger stand. The rest is history, told with varying degrees of success at a meandering pace that never lags but never really pursues any interesting train of thought. Ever wondered the backstory behind the ice-cream powder the McDonald’s used for their milkshakes for decades? You’ll find out if you decide to go and see The Founder, but the question is do you even care? The ice-cream powder story is not a particularly interesting one, unless you happen to be a fanatic McDonald’s enthusiast (they have since reverted back to ice-cream – one uninteresting tidbit that The Founder offers).

The Founder is aided by competence across all areas of its production, from Hancock’s direction, to John Schwartzman’s cinematography, Carter Burwell’s score and even Keaton’s probably intentionally nauseating depiction of Kroc. But the film is hindered by an absence of the kind of flair that Fincher and screenwriter Aaron Sorkin brought to The Social Network. Ray Kroc recognised an opportunity to swindle small town burger flippers and capitalise on the world’s increasing eagerness for quick trash. It’s a mildly interesting story that might have become immeasurably more interesting if The Founder had something insightful to offer in regards to it.