"The Great Wall is about co-operation, perhaps more than any other thing that it's about (and I include giant man-eating monsters in that), which is an encouraging thing."

What marvellous things low expectations can accomplish. Do you know what? I kind of liked The Great Wall. Do you know what else? At the early media screening that I attended, they accidentally screened a version of the film that didn’t have subtitles. There were stretches of Mandarin dialogue that were indecipherable to me. The lingual confusion was a set back, but not one so debilitating that it made me forget what a fun time I was having with Zhang Yimou‘s film. Some of that fun was a direct result of what Yimou was trying to achieve and some of it was because of what he hadn’t achieved. The Great Wall is a seriously flawed film, but then most films are. As I watched The Great Wall unfold, I found myself making a conscious decision to send my concerns regarding its flaws to the back of my mind.

The plot is almost completely meaningless, but let’s have a dabble anyway. A duo of mercenaries, William (Matt Damon) and Pero (Pedro Pascal) stumble upon the Great Wall of China in the time of the Song dynasty, which, for those of you without Wikipedia, ran from 960 until 1279. Initially treated with suspicion, William and Pero are eventually welcomed by the commanders of the force that command the Wall, The Nameless Order, after proving themselves useful in battle. The Nameless Order are perched on the Great Wall for a reason. They’re there to defend China from a horde of enormous man-eating monsters called the Taotie. That’s about all you need to know. It’s about all The Great Wall will be willing to give you. 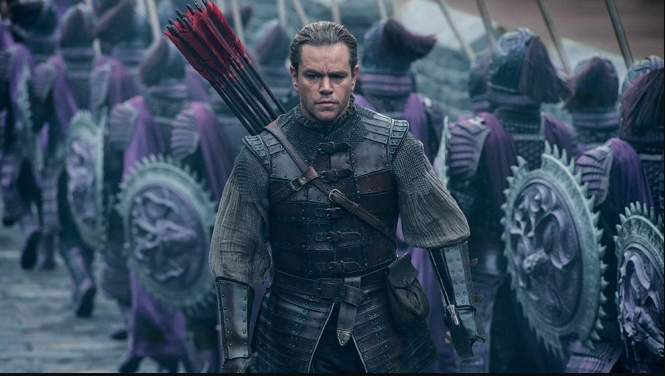 It’s a silly movie but it’s also a fun one. One glaring problem is the underdevelopment of the characters. I say with absolute earnestness that had The Great Wall allowed even slightly more time for investing in each character (particular the impressive looking line-up of leaders of The Nameless Order) then it might have been a great action movie and not just a colourfully diverting one. Another glaring problem are gaps in strategical logic, but it’s an issue that may have been easier to forgive if the first problem wasn’t so crippling.

A lot has been made regarding the casting of Matt Damon in the lead role. Damon may be the film’s central character but the casting decision is less like Hollywood has forced Matt Damon into a Chinese movie and more like the Chinese film industry has allowed Matt Damon to be in a Chinese movie. Here’s something that Yimou had to say about Damon’s role in the film that happens to be something with which I agree: “In many ways The Great Wall is the opposite of what is being suggested. For the first time, a film deeply rooted in Chinese culture, with one of the largest Chinese casts ever assembled, is being made at tentpole scale for a world audience. I believe that is a trend that should be embraced by our industry.” The Great Wall is about co-operation, perhaps more than any other thing that it’s about (and I include giant man-eating monsters in that), which is an encouraging thing. If it leads to more large-scale international film co-operation, that’s also good.

It doesn’t mean that I’ll be backing Damon’s performance for a Best Actor statuette in a couple of weeks. Matt Damon has a contemporary screen presence. He’s not the right man for this kind of  job and his involvement only augments the strangeness of The Great Wall, which is potent enough without him. Nevertheless, Damon commits himself with an enthusiasm that would almost have you believe that he is the right man for the job. That’s a great deal of enthusiasm. The Chinese cast, including Andy Lau, Jing Tian and Zhang Hanyu are universally wonderful albeit mostly woefully underdeveloped. The film might have been comprised entirely of shots of the leaders of The Nameless Order looking impressive and it would have been fine with me.

I’m glad that The Great Wall exists. In all likelihood, the film will be unsuccessful with Western audiences, doomed to recede into our vaguest memories. I can see myself in fifteen yearsm suddenly recalling that strange time that Matt Damon was in a Chinese movie about a group of soldiers defending the Great Wall of China from man-eating monsters. I hope that my future self decides to sit down and watch it, and I hope that I have as much fun in fifteen years as I did at the screening tonight. My gladness that The Great Wall exists probably outweighs my regard for it, but I am exceptionally glad that it exists.