The Fellowship of the Ring is now twelve years old, yet the vibrancy and creativity that Peter Jackson and his crew brought to that film still feels like a fresh memory. There was a sense of imagination to Fellowship, which somehow managed to effectively maintain an oft-elusive mix of spectacle and good story-telling. It’s hard to imagine The Hobbit: The Desolation of Smaug will conjure such fond feelings twelve years from now. Since 2001, Peter Jackson’s Middle Earth has become progressively stale with every film. There is a titanic lack of inspiration behind The Desolation of Smaug.

The dwarves, a highlight of the original novel, unfortunately fare the worst. Far from Tolkien’s stoic, bearded warriors, the dwarves here are an eclectic mix of buffoon’s who fail to invoke any real emotion in the audience. It’s not the fault of the actors but rather it is the lacklustre screenwriting team of Jackson, Fran Walsh and Philippa Boyens who let the team down. Why should we care about about Thorin Oakenshield’s quest? Other than a few throwaway lines about ‘reclaiming our homeland’, we’re never given any reason to. The filmmakers should be well aware that it takes more than words to invoke sympathy in an audience.

There’s an unsteadiness to the plotting, a result perhaps of stretching the relatively brief novel into three long films, or because of an apprehension on the filmmakers’ part of living up to the colossal success of The Lord of the Rings. I’ve no problem per se with the decision to make The Hobbit into the trilogy, especially within the world of Jackson’s Rings films (and this is very much Jackson’s The Hobbit, not Tolkien’s), but the elaboration is not a triumph. Regrettably, the filmmakers have not struck upon a way of plotting the film in a compelling manner, which meanders as a result of having no beginning, middle and end. We’re left with little sense of anticipation of what’s to come. The film certainly didn’t leave me energised for a third instalment. 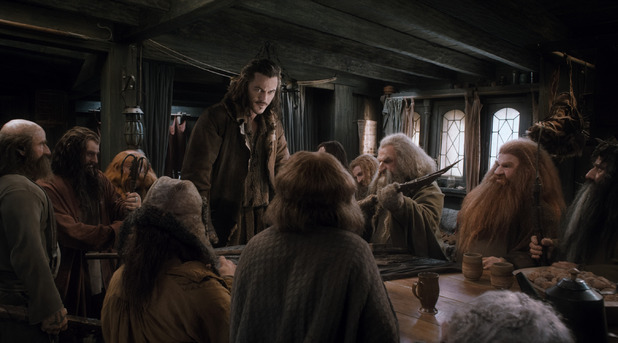 It isn’t confident filmmaking; something that shines through in the end product. Having said that, The Desolation of Smaug still trumps the lifeless first instalment, last year’s An Unexpected Journey. Despite the many problems of The Desolation of Smaug, there is much to be admired. Ian McKellen has perhaps never been better as Gandalf, whom he plays so well it is at times remarkable. Luke Evans as Bard of Dale, who arrives on the scene during the film’s second half, also has a magnetic presence and manages to elevate The Desolation of Smaug every time he is on screen.

Smaug himself, the current king under the mountain, is also a success and almost certainly the greatest dragon committed to celluloid (no offence intended to the two Eragon fans out there). There is real menace to Smaug and his introduction is one of the times The Desolation of Smaug really comes alive. However, the video game-ish chase with the dragon through Erabor towards the film’s conclusion was tediously unnecessary. Worst still, it could have effortlessly been cut to allow more time and care for shape-shifter Beorn, who is mournfully envisioned.

The music is abysmal and, as outrageous as it sounds, is one of the significant reasons the film often fails. It’s almost impossible to believe that this is the same Howard Shore who once wrote the unforgettable score for The Fellowship of the Ring. In the near-three hour running time of The Desolation of Smaug, there may have been less than five minutes of competent music. There is often music when none is needed, but worst still there are too many scenes in the film that might have been great were it not for Shore’s woeful score.

At this point, there is little hope that the final chapter of The Hobbit trilogy will be return to the Middle Earth of 2001. Nonetheless, the trilogy has its moments, and indeed The Desolation of Smaug has much going for it. Unfortunately the glaring problems are too detrimental to the film to consider it a true success. There was a real sense of excitement during the years in which The Lord of the Rings films were released. The Hobbit trilogy so far, has inspired little more than indifference.