"The Starling’s bigger problem is not its quirkiness, which registers as such only by the most lenient of Hollywood standards. Rather, it’s the overarching milquetoast earnestness that sinks the movie. "

"The Starling occasionally veers toward being a useful consideration of the stages of mourning."

In Australia, swooping birds are no joke. Only last month in Sydney, an infant died when her mother stumbled while trying to avoid one such attack, dropping her child in the process. The Starling is an American movie, set in America and made by Americans, so it needn’t concern itself with the territorial defensive strategies of the Australian magpie. However, for Australian audiences at least, it’s a bit triggering that the movie treats dive-bombing birds as a quirky source of humour. The fact that The Starling is also about the death of an infant girl just happens to be a coincidence, but it does suggest that a plot about a starling swooping Melissa McCarthy, who must wear a retro pigskin football helmet to protect herself, is out of place within the movie itself. 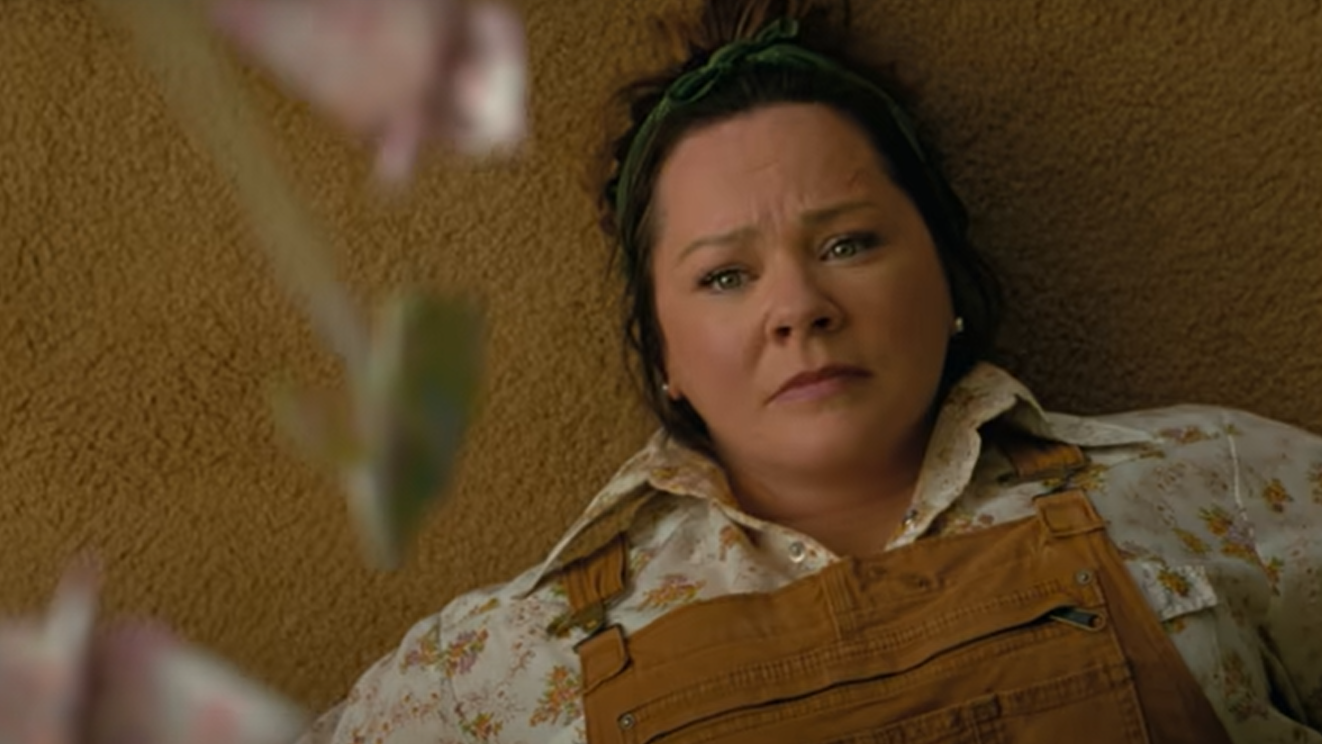 The Starling’s bigger problem is not its quirkiness, which registers as such only by the most lenient of Hollywood standards. Rather, it’s the overarching milquetoast earnestness that sinks the movie. The film is a broad contemplation of the emotional journeys of two grieving parents, played by McCarthy and Chris O’Dowd – actors who both happen to have broken out to the world at large ten years ago in Bridesmaids, though not as each other’s love interests in that case. They’ve got different approaches to the SIDS death of their baby Katie. McCarthy’s Lilly keeps up some version of her former good humour, continuing to plug away at her job at a grocery store in a small rural community. O’Dowd’s Jack – who fears his oversleeping may have led to Katie’s death – is now in a nearby mental institution after a suicide attempt.

On the face of it, this is pretty confronting material for an American mainstream movie, and could be the makings of a thoughtful drama. John Cameron Mitchell’s Rabbit Hole is one of the great underappreciated dramas of the 21st century, exploring similar subject matter through actors Nicole Kidman and Aaron Eckhart. But the approach here underscores the film’s desired affinity for terms like “heartwarming” and “life-affirming,” which are almost always warning flags when used to describe a movie. With a middlebrow prestige director like Theodore Melfi (Hidden Figures) as its shepherd, this shouldn’t come as much of a surprise, and the film has a succession of truly bland, truly wet pop songs to carry the point through.

As the titular bird flies through a variety of opening scenes with a chocolate bar wrapper in its beak, we momentarily meet all the characters who are going to populate Lilly and Jack’s world, who include Lilly’s post-pubescent fellow grocery store worker (Skyler Gisondo) and the veterinarian she seeks out for emotional counseling to process her grief (Kevin Kline). You read that correctly – it’s this film’s idea of quirk that Lilly sees a shrink who neuters cats for a living. It’s the kind of opening that sets off a different type of warning flag, to one of those products of early 21st century cinema where a bunch of characters who don’t know each other are linked by unforeseen circumstances. Fortunately, it doesn’t actually end up being that, but the mere suggestion does not start things off very promisingly.

Lilly got the referral to Kline’s character from one of Jack’s doctors at the institution, an inordinately serious woman played by Kimberly Quinn, the director’s wife. That she would give such a straightforward referral, leading to a scene where both Lilly and Dr. Larry Fine (yes, he’s named after a stooge) wonder what the heck they’re doing in each other’s company, strains credibility indeed. Because Kline and McCarthy are both funny and engaging actors, and it’s always nice to see Kline’s distinct brand of dry patter, their scenes together generally work. The logic underpinning them is what’s flawed, and it continues throughout the movie.

The Starling occasionally veers toward being a useful consideration of the stages of mourning. O’Dowd in particular has a couple emotional speeches that put a lump in your throat. But that’s the tease about a movie like The Starling. It has plenty of good components, but they’re assembled in ways that hew to a lamely safe style of filmmaking.

Then it has components that it just wastes, like Timothy Olyphant as Lilly’s jerk of a manger at the grocery store, who seems there only to scold Lilly about how her work is slipping and to tell her she’s on thin ice. Since he’s such a charismatic actor capable of so much more, one wonders why he bothered with a role that requires him only to be insensitive to the protagonist’s emotional state. A pity also that someone saw Hamilton star Daveed Diggs suited only to play an orderly at the institution who pops in for about three very short scenes. 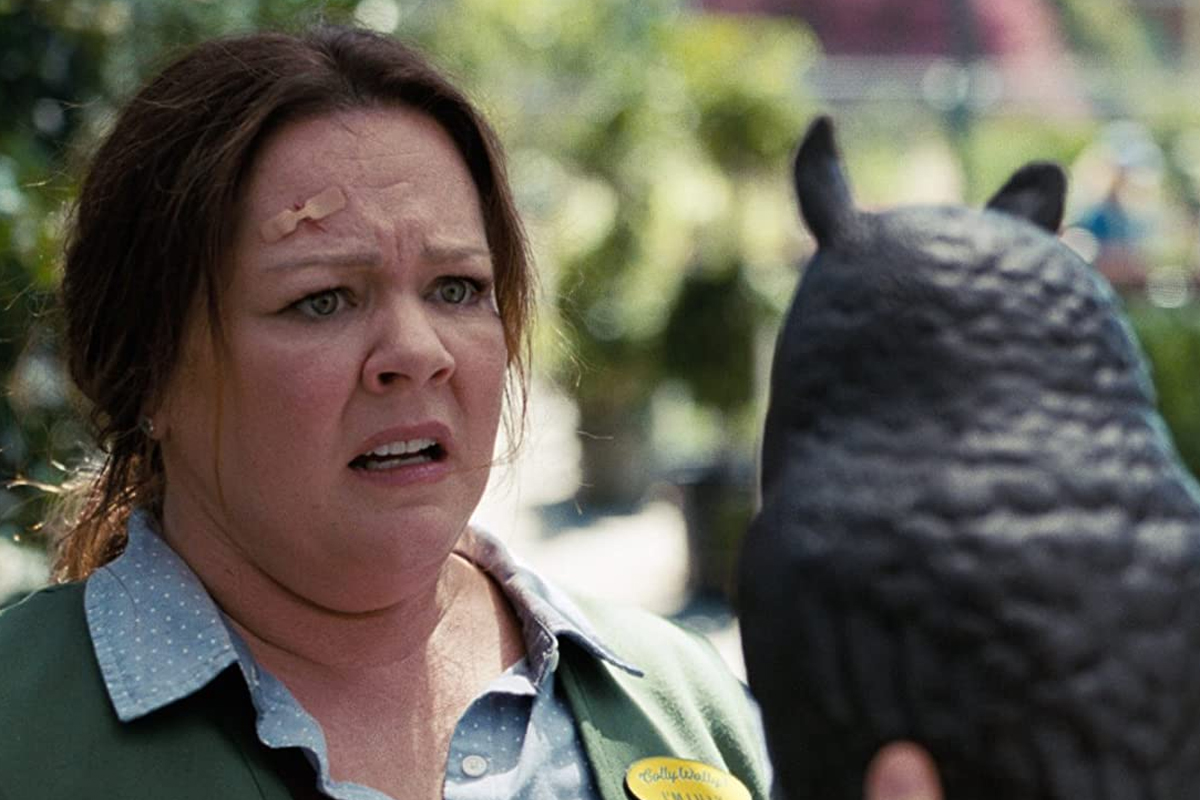 But let’s not forget the starling of the title. Given that it provides the film’s name, we keep trying to figure out what its thematic significance is supposed to be. Dr. Larry Fine tells us at one point that the starling is no ordinary bird and that Mozart was once inspired by one. We also know that the bird really, really does not want Lilly to get anywhere near its nest. Okay, so it’s a protective mother and Lilly wasn’t enough of one, leading to the death of her child? If that’s the message, better just to have it serve as comic relief, giving Lilly forehead scars and knocking her off ladders.

The Starling is currently streaming on Netflix.