There is a standard formula that all disaster films seem to follow – perfectly ordinary day, with a group of ordinary people who are usually wholly unconnected to each other. Disaster strikes! Now this group of people are the only survivors (at least the only ones we are supposed to care about) and are forced to stick together as they try to make it out of the disaster area alive. Throw in an asshole who is only out to save himself, and a small child for good measure, and you have your disaster film recipe. But hey, just because there is a stock standard formula to follow, doesn’t mean you can’t have a film with some pretty spectacular action. This is The Tower.

To get a little more specific about the plot: Lee Dae-ho (Kim Sang-kyung), widower and father to young daughter Ha-na, is the maintenance manager of the luxurious Tower Sky complex – a pair of towers where the affluent live the high life. He is secretly in love with fellow employee, Seo Yoon-hee (Son Ye-jin). The tower is plagued with maintenance problems (mainly, the sprinkler system above floor sixty is malfunctioning) but the buildings owner is only concerned with throwing his spectacular Christmas party – the publicity alone will bring in massive revenue. Mr. Jo has ordered helicopters to even sprinkle snow down upon his guests, ignoring warnings that the flight will be too risky because of possible updrafts. You can guess what happens. The helicopters crash into the building, starting fires and causing massive damage. Dae-ho desperately tries to get to his daughter and Yoon-hee, while a group of firemen led by Captain Kang (Sol Kyung-gu) try to stop the fire and save everyone they can.

So, what sets this apart from a pretty mediocre film like say, Poseidon (I’m sure I won’t be the only person who finds the concepts very similar). Well, The Tower actually spends a decent length of time introducing us to the characters and setting the scene, so we’re not just thrown into a movie with a bunch of people we don’t know and don’t even care about. It has fun with these introductions, using a touch of humour and poking a bit of fun so we aren’t left rolling our eyes at any over the top dramatics. 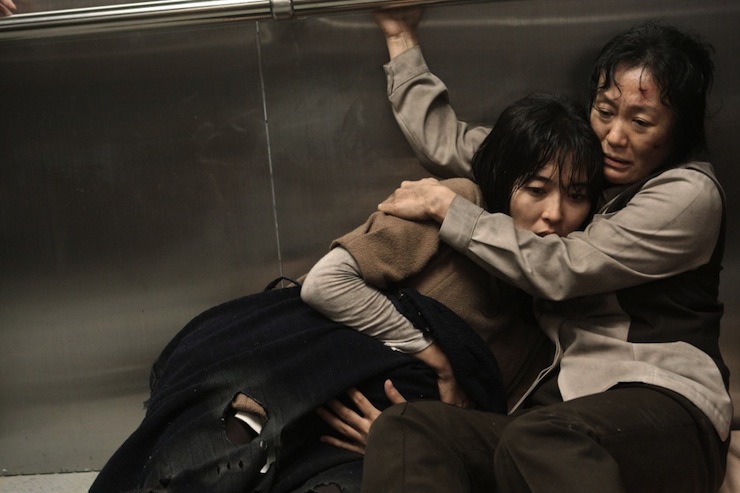 When catastrophe strikes, everything takes on an almost unexpectedly serious tone; there is still that element of humour sprinkled throughout to give us some relief from the tension, but we are quickly reminded that we are in for a movie full of chaos and destruction. The film certainly doesn’t shy away from the carnage that comes with large pieces of burning building falling on top of people. The action is really quite spectacular, and some of the best I’ve seen for a long time. Slick, intense, top-notch production.

The filmmakers made the wise choice of splitting the narrative across several paths and groups of people. Instead of one larger group, we get to follow the rescue efforts from the firefighters, the frenzy of emergency services and media outside the building, and our main group of terrified survivors. Kang and the young fireman trainee, referred to by the others as ‘Probie’ (Do Ji-han) are protagonists that you can really get behind. Dae-ho and Yoon –hee are likable leads who thankfully do not fall into that horribly cliché ‘ordinary people save the day’ mode (it’s not as if they do nothing, but the hero role is really reserved for Kang and his team, and deservedly so). And in Ha-na, we finally have a child who for once doesn’t annoy the crap out of everyone. Besides the understandable tears, she stays quiet and stays close to the adult in charge. Going back to Poseidon, does anyone remember how a young James Tiberius Kirk was forever wandering off and getting stuck in ridiculous situations, putting himself and others at risk? Yeah…I’m pretty sure we all hated him.

The Tower does fall prey to the occasional cheesy dialogue and over the top situations, but it’s thankfully kept to a minimum. If you’re a fan of disaster films, or even just some good, enjoyable action, then you’ll find this a solid piece of entertainment that will easily grab your attention.

The Tower was part of this years selection at the Korean Film Festival and is also available on DVD thanks to Madman Entertainment.