‘It is not the man who has too little, but the man that craves more, that is poor.’ – Seneca

Having been assaulted by the vices of the world’s financial elite for three straight hours, I have rarely felt as content with my own economic situation than just after I’d finished watching Martin Scorsese’s new film, The Wolf of Wall Street. There’s no real joy in money for men and woman of the world of stock broker Jordan Belfort – it’s an unhealthy addiction – just one more in a brutally long list. Money doesn’t buy happiness, but it can buy a lot of things that simulate happiness.

The film is based on Belfort’s memoir of the same name. Belfort ran the firm Stratton Oakmont Inc. (a name he chose because it sounded classy) during the 90’s, and engaged in huge amounts of stock fraud and corruption. We don’t see much outside of Belfort’s years outside of his time at the firm, because the film doesn’t care about it. The Wolf of Wall Street isn’t about Belfort at all, it’s about a lifestyle and it’s about an attitude.

Indulgence and excess fill nearly every frame of The Wolf of Wall Street. Belfort begins his adult life as a lowly stock broker (a superior repeatedly insists that he’s ‘pawn scum’), but before too long he’s surrounded by a sea of drugs, high-end prostitutes and zoo animals. I mean zoo animals literally, but there’s also an overbearing animalistic quality to the men Belfort surrounds himself with. A gold Rolex is thrown into an crowd of money-hungry stock brokers, who claw at each other to grab it. Belfort encourages the behaviour, and ultimately it spawns from his own attitude towards greed. The men look up to him and his flippant attitude toward what money can buy. In one early sequence, the office shaves one of the female secretary’s heads as part of a Friday tradition of debauchery. She is offered 10,000 dollars. As soon as the shaving begins, the men are distracted by a marching band of prostitutes who burst through the door. Nobody really cares what depraved activity their paying for, as long as they’re paying for it and it’s happening. 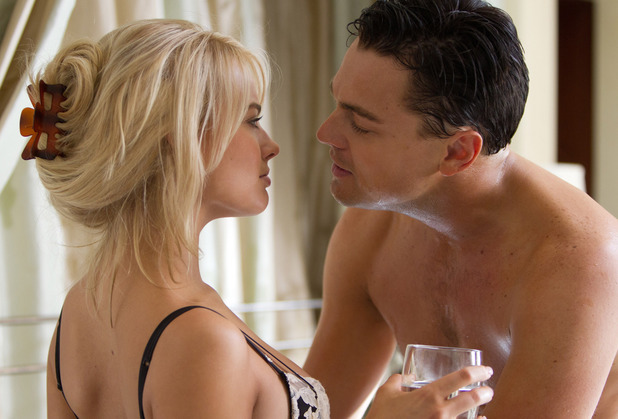 “Cocaine, testosterone and body fluids,” Jordan describes his office with pride. There’s surprisingly little to discuss regarding The Wolf of Wall Street besides those three things, because there’s remarkably little going on. Scorsese hammers home the excess, but wisely never remarks as to the morality behind it. Much of the film almost seems to admire the behaviour of Belfort and his companions. It certainly makes it all seem like a hell of a lot of fun. Perhaps the most impressive element of The Wolf of Wall Street is how it entices. There are moments when we check ourselves for cheering on Belfort’s antics, even when he’s lying drooling on the ground.

The film is long, but it’s never dull. Individual scenes stretch far beyond their natural conclusion, but are always compelling. The Wolf of Wall Street might have been a better film had it been more efficient with its narrative, but Scorsese seems to have embraced Belforts’s larger than life attitude and applied it to his own filmic desire for immoderation. It’s an onslaught of visuals and music, and is a hell of a ride for the three-hour duration, but The Wolf of Wall Street may have been a superior film had some of the fat been cut.

The Wolf of Wall Street is a peculiar film in that it should disgust but somehow remains appealing. Much of this has to do with DiCaprio’s incongruously likeable performance, but it may also key into our own desire to be part of the extravagant wasteful lifestyle these stock brokers enjoy. As Belfort destroys expensive cars and boats, snorts mountains of drugs, throws hundreds of dollars away like garbage. Part of us is repulsed by Belfort’s by behaviour. But part of us wants in.