"You really have to grade on a curve with Thunder Force, and even then you’ll be out of luck."

"In a recurring bit that will certainly activate your gag reflex, Lydia’s enhanced state causes her to crave raw chicken, which she jams into her face like the Cookie Monster going after a plate of biscuits."

Melissa McCarthy and Octavia Spencer were not cut out to be superheroes. The metaphorical kind, sure – as in, “the way they inspire us is heroic.” But not actual superheroes. With McCarthy, that’s the joke, as she’s the female Will Ferrell in terms of having an appearance that isn’t suited to the occupation she’s undertaking. With Spencer, it’s just miscasting. Spencer can do a lot of great things, including winning Oscars, but kicking butt – literally, not metaphorically – is not one of them. With her accolades and smart career choices, she should have known to stay away from the turkey that is Thunder Force. 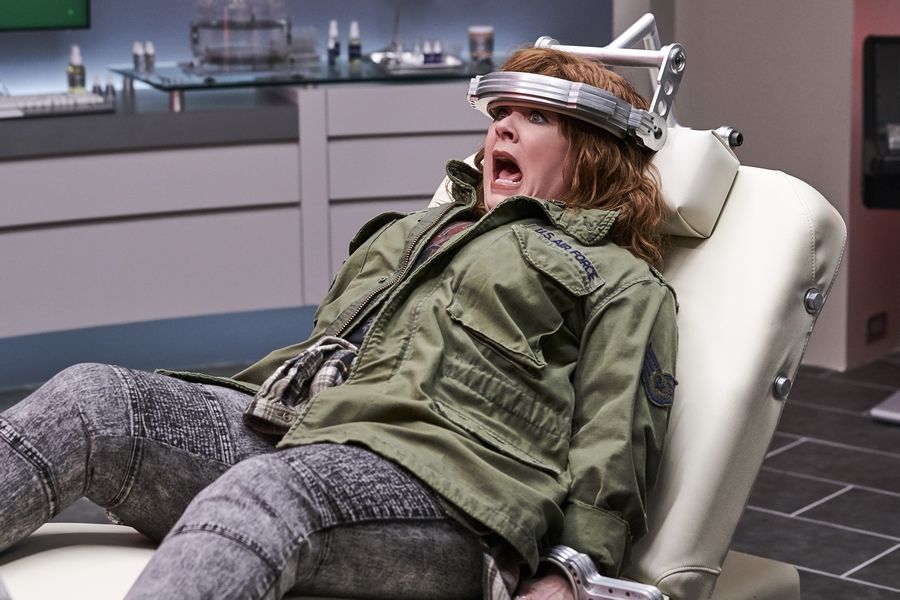 McCarthy should have known better as well, only she and her husband are a package deal, and he wrote the film for her. Ben Falcone has now directed his wife in five films dating back to 2014, only one of which – 2016’s The Boss – had more guffaws than groans. Their most recent collaboration, Superintelligence, hit cinemas less than six months ago, and it also featured a high-concept genre hook, where McCarthy had to prevent an A.I. from destroying the world. It was only intermittently diverting, but looks like a masterpiece next to Thunder Force.

McCarthy is again in the business of saving people – this time, just the city of Chicago – in this new Netflix movie, where she bumbles her way into getting injected with a super strength serum. That means she’s the only one who can stop a band of mutated psychopaths called Miscreants from raining their chaos on the Windy City. She and of course Spencer, the inventor of the serum, who has to settle for only the super power of invisibility, as McCarthy’s “what does this button do?” curiosity doses her with the super strength that was intended for Spencer.

Lydia (McCarthy) and Emily (Spencer) have known each other since they were kids, when they displayed the super powers of intelligence (Emily) and brute strength (Lydia), saving each other from playground bullies and becoming fast friends. When Emily thought Lydia was holding her back by preferring Van Halen concerts to studying, the two parted ways, Lydia becoming a blue collar type who pours beer in her cereal, Emily an Elon Musk type with her name plastered across the fronts of buildings.

Emily is carrying on the work of her geneticist parents, who were killed in an attack by the Miscreant supervillains. She wants to give ordinary people the power to fight on the same level as the Miscreants, and Lydia is as ordinary as they get. The only reason she finds herself in that chair in Emily’s laboratory, about to get the world’s most uncomfortable Botox injection, is that she went there to lure Emily to their high school reunion. So their reconciliation is off to a bad start, but now they’re unwittingly joined at the hip as the first two super-powered humans, known by the names The Hammer and Bingo. 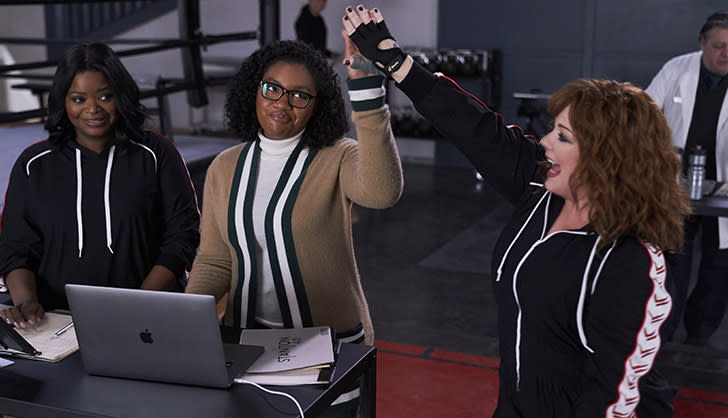 Emily hates the name, and no wonder. The only identifiable reason for calling her Bingo is to set up a joke where Lydia thinks the dog in the song – you know, “B-I-N-G-O” – is called Zorro. Is that supposed to be funny? You really have to grade on a curve with Thunder Force, and even then you’ll be out of luck. The other supposed attempts at humour involve McCarthy’s trademark pratfalls, which stopped being funny ten years ago, and instances where characters quibble over semantics during high-intensity moments. For example, there’s a recurring bit about whether one of the villain’s henchmen prefers being called Andrew or Andy. Most of us would prefer the movie hadn’t devoted three minutes of screen time to this non-starter, a typical example of the thudding flatness of the set pieces.

The villain is played by Bobby Cannavale, another actor who should know better, who also collaborated with McCarthy and Falcone on Superintelligence – lending credibility to the notion that this was something they threw together because they already had all the principals assembled. He’s a shady politician who is also secretly a Miscreant, and he’s in cahoots with Miscreants named Laser (Pom Klementieff) and The Crab (Jason Bateman), the latter of whom has crustacean arms and pincers after a run-in with a radioactive crab. The idea is as bad as it sounds. Bateman tries to sell this character with his wry deliveries, but he falls short, and his romantic subplot with Lydia (because of course) isn’t the least bit convincing or funny. Their courtship rituals involve thousands of bad seafood puns and Lydia basting him with butter and Old Bay seasoning.

This film is also gross. In a recurring bit that will certainly activate your gag reflex, Lydia’s enhanced state causes her to crave raw chicken, which she jams into her face like the Cookie Monster going after a plate of biscuits. Only this is slippery and slimy raw chicken – or is supposed to be, anyway – and seeing McCarthy’s cheeks fattened with the stuff just reminds us how McCarthy, after her own multiple Oscar nominations, should have moved past this lowbrow garbage that verges on body shaming.

Thunder Force would seem to have the opposite agenda. As both McCarthy and Spencer have bodies that don’t fit into traditional superhero spandex, there could really be something progressive going on here about empowering all types, and specifically, empowering women. These messages are as flat and as poorly delivered as anything else in the film. In fact, there are even a couple scenes that approach gay panic, where characters have to hurriedly reassure one another that they are attracted to the opposite sex. The forces behind mainstream comedy in 2021 must do better than this. 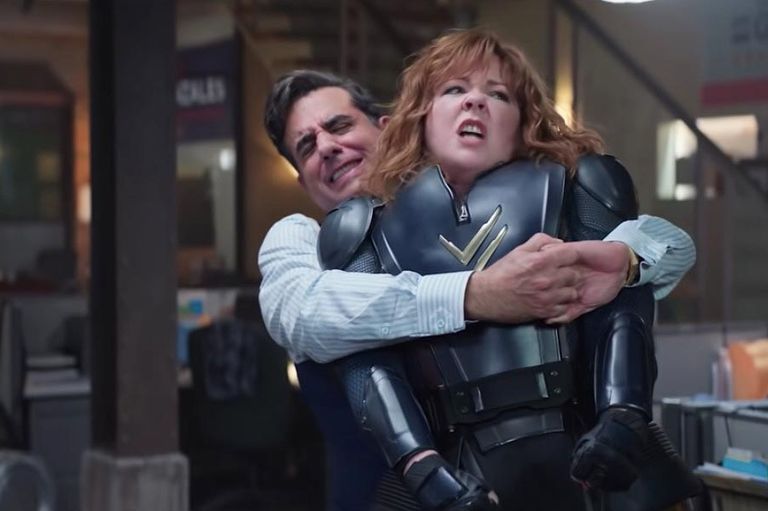 Thunder Force could do all the things it does wrong and still be worth an occasional chuckle if McCarthy and Spencer just had chemistry. It’s hard to believe they could have ever been friends, though. Emily looks at Lydia like she’s a piece of gum stuck to the bottom of her shoe, and too right – Lydia is about that charming. The moments where they’re supposed to have fun are just as false, as they involve playing around with technology that Emily seems to have forgotten she invented and doesn’t know how to use. Maybe that’s not such a surprise, as this is all pretty forgettable.