"Theron’s dedication to the role is evident from the first moment..."

"Tully has its very conventional aspects, as well as some that might make you groan."

Fathers in the viewing audience, take note: If you see Tully, you will likely want to go home and do the dishes. Or change a nappy. Or at least put down your video games for five minutes. One of your brothers, Jason Reitman, has made the ultimate celebration of motherhood, released in Australian cinemas just in time for Mother’s Day. And if that sounds too naff by half, 1) maybe you’re part of the problem, or 2) you’re underestimating how well he can do this without scolding us for deferring the important decisions to the responsible adult in our relationship. The movie is not always as it appears, either, which will satisfy those yearning for a little narrative daring.

In an age in which representation and who gets to tell whose story are at the conversational forefront, this male director somehow convinces us he’s a legitimate choice to depict all the gross and hairy details of being a mother. That’s in part because his two primary collaborators are women, one a bit more trustworthy than the other. Charlize Theron has a track record, especially recently, of mostly right decisions, and she throws her vanity out the window again to play a mother of three just before and after giving birth for the third time. Screenwriter Diablo “Home Skillet” Cody, who worked with Reitman on Juno and again with both Reitman and Theron on Young Adult, has some distracting tics, and has been pilloried in the past for her try-hard “clever” dialogue. But when she’s at her best, she also elevates the material and gives us a true sense of what she and other mothers have gone through in both the ordinary and extraordinary circumstances of their duties as the female parent. 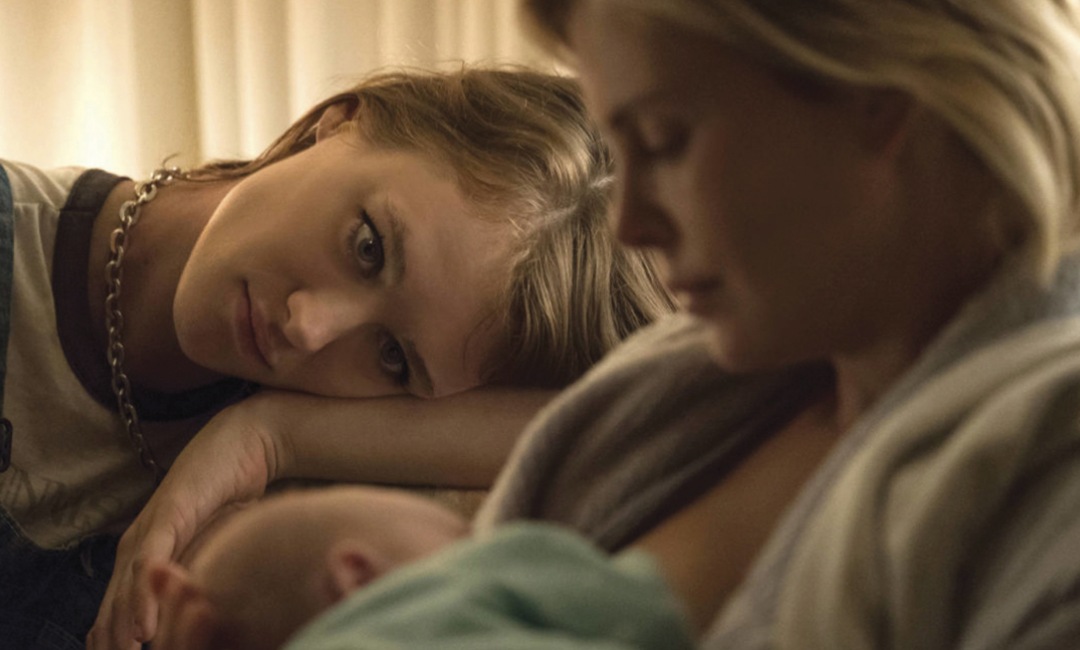 Theron’s dedication to the role is evident from the first moment, and will have you checking online to see how recently she actually gave birth. The woman so wiry and sinewy in Mad Max: Fury Road packed on 22 kilos in 100 days to play the role of Marlo, a mother whose challenges with her first two children, one of whom is on the behavioural spectrum, only get more complicated when she and her husband (Ron Livingston) have a third unintended pregnancy. The possible saving grace: an offer by Marlo’s obnoxious and successful brother (Mark Duplass) to hire a night nanny as a baby gift. A night nanny is, of course, a young woman who handles all nighttime responsibilities other than the actual feeding of the newborn, for which she wakes up the sleep-deprived mum, ultimately helping restore that sleep and start the slow return to normalcy.

Initially they reject the offer as too bourgeois, and besides, unnecessary. Three weeks of soul-crushing nappy changes, baby monitors squawking, breast pumping and the total loss of any semblance of cleanliness to the house, and they’re rethinking that decision. Enter Tully (Mackenzie Davis), a manic pixie dream nanny, who restores order and sleep and is only just a little bit eccentric. Just a little bit. 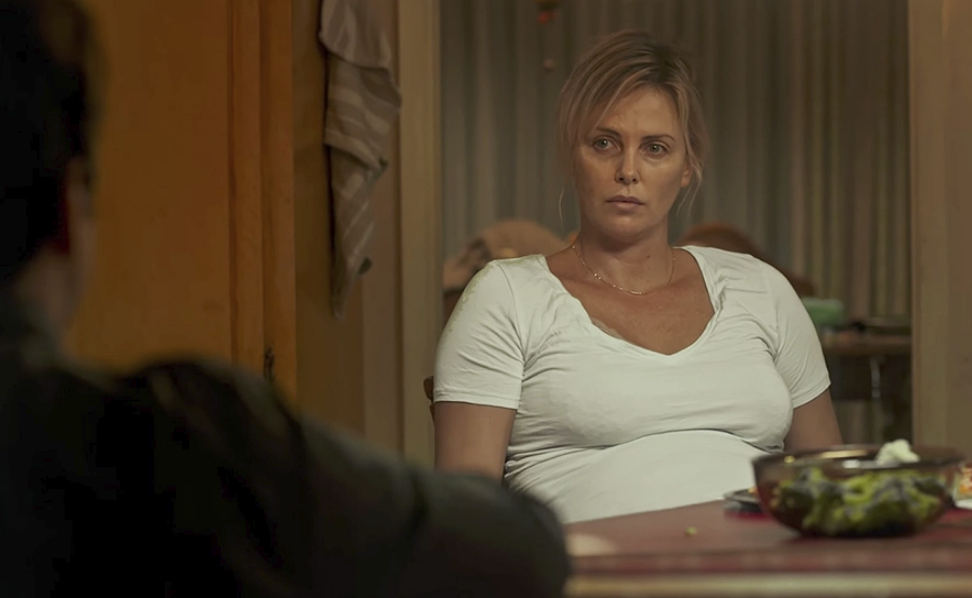 Tully has its very conventional aspects, as well as some that might make you groan. Cody can be seen “try-harding” on her dialogue from time to time, such as when Theron says her brother’s “factory setting is asshole,” or when a black friend of Theron’s says she has to get this coffee back to its intended recipient before it’s as “cold and black as my womb.” Eyeball rolls sometimes accompany the groans. Reitman too has his regrettable moments, including some awkward staging and stilted exchanges.

As the movie moves forward it shakes these off and develops a stride, almost literally finding its rhythm with a great montage of the incessant grind of baby-related activity. It’s the kind of kinetic use of montage that Darren Aronofsky might appreciate. The narrative also has a few tricks up its sleeve that bust some of the conventionality.


The thing that really creeps up on you about Tully, though, is what it’s doing. It’s painting a portrait of a woman who is exhausted, not only or perhaps even not primarily because she’s the mother of a newborn. It’s because she’s essentially a single parent. Her husband Drew is not a bad guy, or at least, no worse than thousands of other husbands and fathers whose small abdications of responsibility eventually result in a tidal wave. Most men don’t mean to be bad fathers or absent husbands, and that’s probably not even the right way to describe them. But many of them are just looking for the most direct path to fulfilment of their own gratifications, putting in a minimal effort that they don’t even recognise as such until they’ve steadily receded into the role of backup parent. It’s a concept explored by Alexander Payne in The Descendants, an otherwise flawed film that finds its shrewdest commentary in how his wife’s coma forces George Clooney to step up and take responsibility.


Many men need that wakeup call, and Tully explores the way many women will just accept the role of responsible adult by default, without even really accusing their husbands of their dozens of minor omissions and infractions. The film certainly does have a lot to say about postpartum depression and the abuses on the body of giving birth, but at its core, it’s examining a parenting imbalance that causes women long-term physical and emotional problems because they take on too much and don’t know how to ask for help. 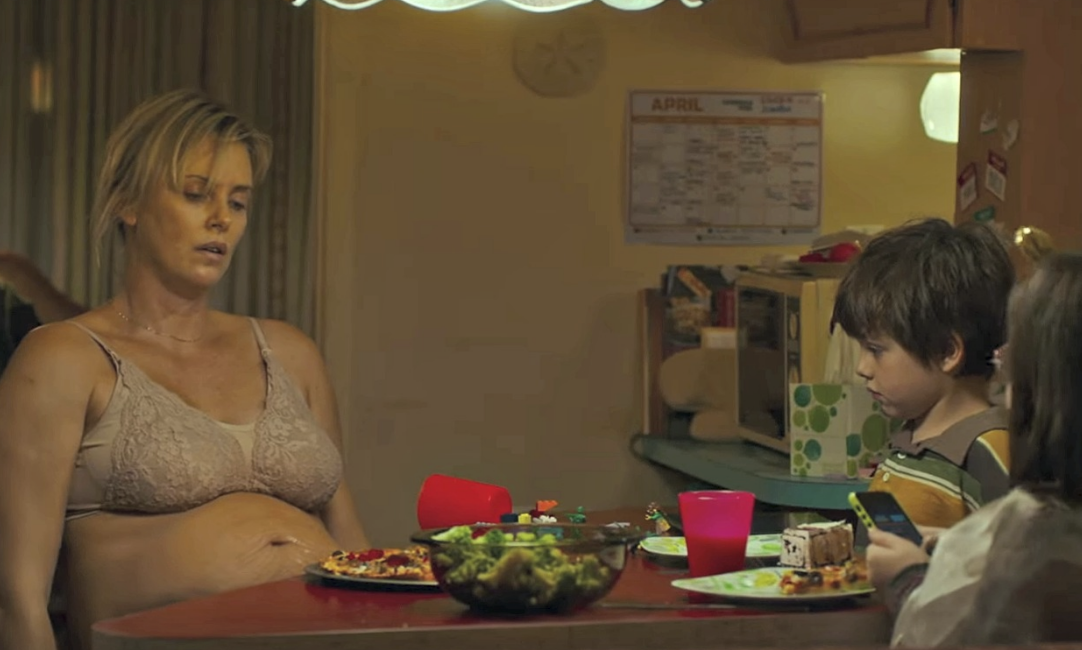 The physical toll of childbirth is one of the really impressive aspect of the execution of this film and Theron’s performance. At one point, Theron is slumped in a chair at her breakfast table, wearing only a nursing bra as the stretch marks and skin flaps on her still-swollen stomach take centre stage. Her older daughter asks “Mommy, what’s wrong with your body?” Out of the mouths of babes.

As she did when she played her Oscar-winning role of Aileen Wuornos in Monster, Theron entirely disregards any sense of looking pretty for the camera. There’s a scene here that recalls that movie, as she’s jogging past a skinny twentysomething and looks like an 18-wheel truck barrelling down a mountain road without its breaks. This from a woman who at age 42 is still regularly appearing in perfume ads. That’s some range.

Reitman and Cody have had their share of ups and downs, but don’t let any distrust of their assets steer you clear of Tully. In Charlize We Trust. Theron delivers a truly thoughtful contemplation on a version of what every mother goes through, but it may be the fathers who should be watching it as their assignment this Mother’s Day.