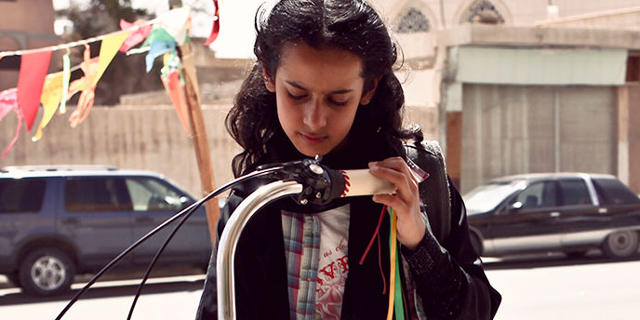 Wadjda is a collection of firsts.  It’s the first film to be shot entirely within the Kingdom of Saudi Arabia, a country with very few cinemas. Its director is Haifaa Al Mansour, the first female filmmaker to emerge from Saudi Arabia. These two unique aspects, combined with the nature of the story, that of a little girl trying to save enough money to buy a bike of her own, bring about a third first – it is the first film of its kind to offer an authentic, measured, yet personal insight into the daily lives of women and girls in Saudi Arabia.

For a film that has such deep and powerful themes echoing through its entirety, the basic story is very simple, but universal. Wadjda is a ten-year-old girl living in a suburb of Riyadh, Saudi Arabia’s capital. Her mother and her teachers repeatedly tell her, that bikes are not for girls – they will undermine her virtue. But the clever, spirited young Wadjda has her mind and heart set on a bike, so she can race against her neighbour and friend Abdullah. She doesn’t see any reason why she shouldn’t be able to. When she hears of a Koran recital competition being held at her school, with prize money enough to buy the bike of her dreams, she enters without hesitation.

There is such feistiness to Wadjda’s character, and Waad Mohammed (in her first film role) brings her to life with a gorgeous, cheeky energy to the titular character. Her spirit and sense of self is apparent from the moment we see her in her room, listening with joy to a song by the band ‘Grouplove’.  But, although Wadjda is the focal point of this narrative, it is through her interactions with those around her in which a richer, more colourful tapestry of daily life in Riyadh. 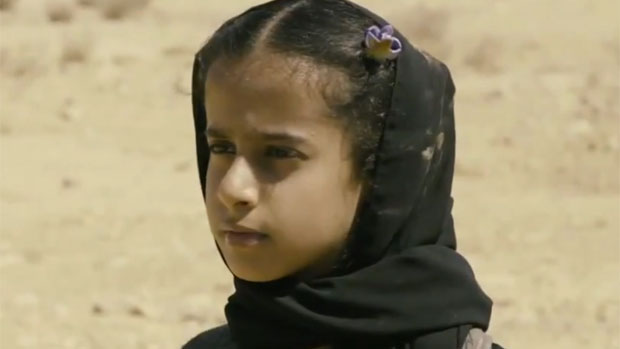 The struggles of Wadjda’s mother, who faces the possibility of her husband taking a second wife, her classmates, and even her teachers, who try to enforce the traditional values of their culture, whilst obviously struggling with their own behind the scenes dramas, make Wadjda a dynamic and thought provoking film. Certain instances and events bring sharp, almost jarring reminders of the status of women  – an older construction worker catcalls Wadjda in the street; a young girl no more than twelve brings in photos of her wedding to show her classmates – but for all this, there is no one particularly villainous. Everything is treated with such matter-of-factness that you quickly realize this is all ‘normal’ behaviour.

Despite all of this, there is such a sense of empowerment that you can’t help but leave with a smile. Wadjda is dauntless in fighting and working for what she wants. Her relationship with her mother, though fraught at times, is strong and touching. Her friendship with the toy shop owner, an older man who sets her favourite green bike aside for her until she can afford it, and her relationship with best friend Abdullah, who helps her achieve her dreams without a word of judgement bring a sense of hope, that change is possible. Mansour handles everything with the lightest, most subtle touch, and that is what makes Wadjda the supremely enjoyable experience it is.