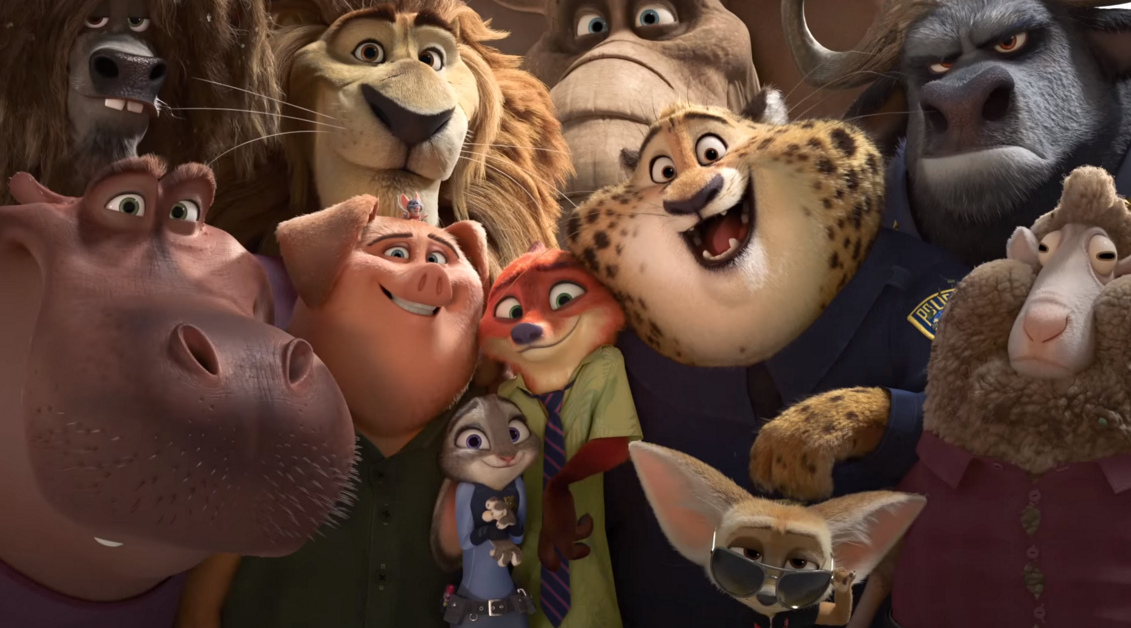 Social commentary has been a central component of genres ranging from the zombie movie to the satire to, yes, the children’s movie. For every Minions, which has literally nothing on its mind, there’s at least one kids movie that’s trying to function as a powerful metaphor for our real lives – even if those kids are completely unaware of this secondary function. So while Zootopia will please kids for its animals wearing human clothes and its colourful and inventive cityscapes, it’s really the parents who will get the most out of the movie’s timely message on multiculturalism and the related growing pains, specifically in terms of recent police shootings in the U.S. In fact, Disney’s latest is poignant enough to buckle the knees of a thinking adult.

The title city of Zootopia is the bustling metropolis where predators and prey have learned to set aside their historical differences and live together in harmony. And it’s a sight to behold indeed. Zootopia is not only a social utopia, but an environmental one, as divergent climates and habitats snuggle together in adjacent zones of the city, separated by glass domes and connected by the express train that zooms through them. Despite being a phenomenally successful social experiment, Zootopia must still be policed, a job that has traditionally fallen to the largest and most imposing creatures, whether carnivore or herbivore. Challenging that status quo is Judy Hopps, who longs to become Zootopia’s first bunny police officer. Guts and determination have brought her to the top of her academy class, but her parents are still wary about sending her from an agrarian carrot-farming village to a city where sly foxes and other untrustworthy creatures lurk around every corner. Reluctantly accepting the can of anti-fox spray they offer her, Judy whizzes off to the big city and finds herself smack dab in the middle of a missing animals case, which may lead to a conspiracy to throw off the delicate balance between predator and prey. She’s reluctantly assisted by a shady fox who makes a living running hustles – the very creature Judy’s parents warned her about. 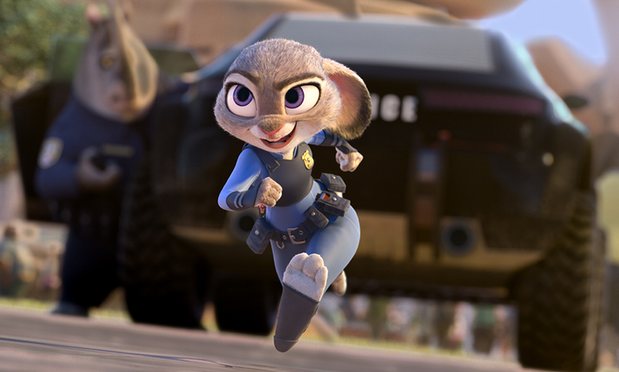 What’s most ambitious about Zootopia is that it’s actually tackling multiple weighty social issues at once. The first of these greets us via the city’s slogan. It’s a city “where anyone can be anything,” which relates most explicitly to the story of a rabbit trying to break through the police department’s species barrier. Since Judy (voice of Ginnifer Goodwin) is a female rabbit, her small stature – especially in a department dominated by bison, cheetahs and elephants – becomes a metaphor for her gender. Women were once considered too fragile to do the tough job of police work, you see.

But in a smartly confronting way, Zootopia makes Judy as much a part of the problem as its solution. It’s something those of us prepared for a straightforward hero’s journey won’t see coming. As much as Judy is doubted because of stereotypes about her species, she contributes to the same sort of stereotyping of Nick Wilde (voice of Jason Bateman), the fox she conscripts into helping her. While the stereotyping has gender overtones in Judy’s case, it has racial overtones in Nick’s. Foxes are treated like second-class citizens in Zootopia, a result of the negative traits historically ascribed to them, such that Nick and his son are actually refused service at an ice cream shop run by elephants. Judy thinks she’s being progressive by intervening in the animal rights violation she sees before her, but she’s the one who has that canister of anti-fox spray holstered on her hip, the result of a bully from her youth who inspired a lifelong fear of foxes. Making matters more complicated is that Nick and his “son” are, in fact, perpetrating a scam at the elephant ice cream shop, which helps confirm Judy’s suspicions even against her better judgement and her desire to treat all animals fairly.

The thematic complexities present in Zootopia show a) how sophisticated it really is, and b) how thorny the issues really are when integrating adversarial groups. The irreconcilable differences are quite literal in a scenario where animals might eat one another, but they also work perfectly as a metaphor for our eminently human struggle to accept other human beings we see as threats. Most tragically in the case of Nick, Zootopia addresses the reality that when you tire of trying to prove the stereotypes wrong, eventually you just give up and start conforming to them. When Judy reaches for her anti-fox spray as an instinctive reaction to a perceived aggression on Nick’s part, adults in the audience will get a queasy reminder of the preconceptions and misunderstandings that have led to numerous fatal police shootings on America’s streets. Going beyond the States, this also reverberates to how Syrian refugees are being welcomed, or more likely rejected, almost everywhere in our world they try to find shelter. 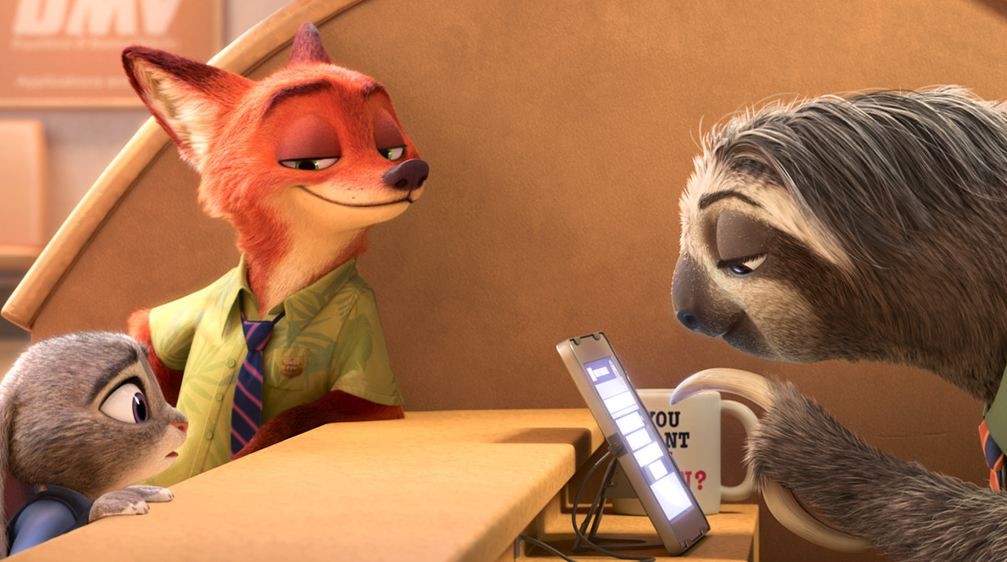 As affectingly and emotionally as these issues are conveyed, it would be misleading to suggest that these do-gooder ambitions actually weigh down the finished film. Zootopia has it both ways, as light and fun as it is genuinely important. It’s bursting with creativity in imagining the infrastructures that would exist in a city that must cater to both giraffes and mice. It can be as funny as it is wondrous, a balancing act co-directors Byron Howard and Rich Moore have perfected in their previous features Tangled and Wreck-It Ralph. Not only does this film love its many-splendoured characters, but it loves cinema itself, as a particular Godfather parody with a mouse in the Don Corleone role will attest. The Godfather may seem a stale topic for parody, just as, on the surface, yet another movie about the sophisticated hierarchies of talking animals might seem stale. But Moore, Howard and their team of writers deliver unexpected freshness at every turn. You might slap your forehead over the obvious joke that Zootopia’s department of motor vehicles is run entirely by sloths, but it’s unlikely you’ll watch their glacial movements without laughing, and laughing hard.

Perhaps the neatest trick in Zootopia’s balancing act is that it doesn’t take easy pot shots at the most obvious target of its social commentary: police officers. In fact, the opposite is sort of true. When all is said and done, Zootopia reminds us how heroic and downright noble the profession can truly be. A movie that will resonate equally with police officers and their tragic victims, with parents and their kids, with people who enjoy serious films and people who enjoy escapism, Zootopia does really achieve a sort of cinematic ideal.