“Do you think if people knew how crazy you were nobody would ever talk to you?” It’s an interesting thought, voiced by a character about halfway through Stephen Chbosky’s debut film, The Perks of Being a Wallflower. That the character actually does struggle with psychological issues is beside the point. At some time or another, we’ve all had the isolating feeling that were are alone in our own thoughts. The film, based on Chbosky’s best-selling novel of the same name focuses on a group of teenagers during the painful period of late adolescence to which I suspect the above quote is most pertinent. 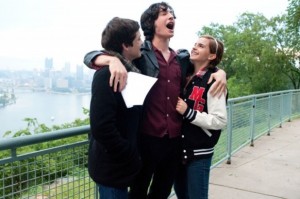 We meet Charlie (Logan Lerman) at the beginning of his freshman year at high school. He’s a loner and we suspect there’s more to his story than he lets on. Any attempts at making friends are rejected, except by a responsive English teacher (Paul Rudd), but as Charlie says if the only friend he makes is his teacher, it would be kind of depressing.

Then he meets Patrick (Ezra Miller) and Sam (Emma Watson), who embrace the fringe status they hold at school. Ezra is homosexual and has a secret relationship with a popular football player. Sam is under confident, a result of abuse and premature sexual experience. They take Charlie in and soon enough he’s one of them; taking chances, trying drugs, meeting girls and absolutely smitten with Sam. They’re all slightly too good looking, quick-witted and charming to ever really be believable as unpopular kids, but it’s easy to suspend our disbelief.

The film is reasonably even-handed. High school jocks in these sort of films never amount to much more than one-dimensional antagonists, although Chbosky reminds us that there are dickheads in every crowd. At one point Sam’s boyfriend, an older kid who’s already moved on to college, completely sincerely declares ‘I don’t write poetry, poetry writes me,’ before blasting Young MC’s ‘Bust A Move’ as loud as it can go. 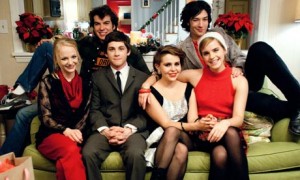 The plot and setting suggest a light, coming-of-age film but the depth behind these characters indicates otherwise. Chbosky’s film offers sometimes uncomfortably accurate depictions of human nature and is often insightful about the differences between the person we are and the person we project to others. There is an uneven tone to the film, perhaps because the more sentimental moments diminish the power of the more truthful ones. Having said that, adolescence is a bumpy ride and the slightly confused quality to the film is probably a nice reflection of that.

The cast is spot on, led by a wonderful Lerman. There is understated charisma to his performance that belies Charlie’s projected behaviour. We can understand what attracts Sam and Patrick to him. Ezra Miller also shines as Patrick, a far more likeable teenager than the distressing titular character in Lynne Ramsey’s 2011 We Need To Talk About Kevin. I also had a soft spot for Dylan McDermott in his small role as Charlie’s father. Harry Potter veteran Emma Watson as Sam is probably the weakest of the three leads, although not glaringly so.

It’s an enjoyable first film from Chbosky and it’s rare that a writer adapting their own work ever does this good a job. Chbosky is a writer first and foremost however, and the film does lack a certain sense of the cinematic which ultimately means that there are some lulls. I think The Perks of Being a Wallflower will resonate with some more than others. It’s definitely a film for those that can empathize with the frustration of your own thoughts, especially amidst the chaos of high school.