This is the second in a series of interviews with filmmakers selected for the ReelGood Film Festival, RGFF ’21. The festival will take place Saturday, 20th March at Lido Cinemas in Hawthorn, Victoria. 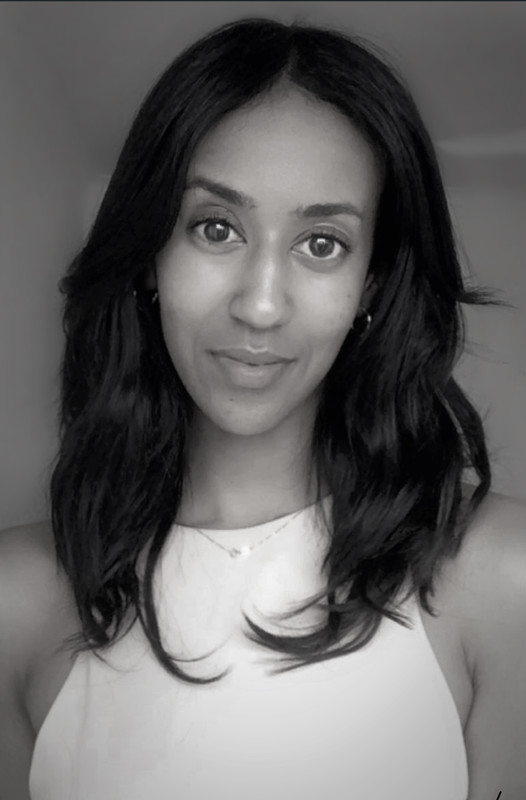 I’ve always been heavily surrounded by films from a very young age and my mum always encouraged and loved for us to watch all types of movies as a family, including classic Egyptian comedies. We would rent like ten movies a week from video stores and watch everything, just so we could do the same the next. That continued until they all basically closed down, then I just went to libraries to find stuff and was introduced to more worldly cinema. It was clear then like this is what I want to be doing in my life, making films like these “finding your purpose” type vibe. I feel lucky to have been encouraged to pursue what I was passionate about although I had never really seen it to be a viable career option.

I didn’t have a camera at first so I was borrowing from friends and collaborating with creatives that did, just experimenting with small projects, mostly just documentary, observational style because I could gain access. I am a very empathetic person and internalise a lot, and found film is the most comfortable medium to express my thoughts and talk about what I see happening in the world. I got to study a bit of cinema and make some stuff in high school, which I loved, and then in uni I studied film production to meet more people in the same field and have access to equipment. HAYAT was once of two short docs I made as part of my course.

I like learning from foreign European and African films, seeing how cinema has evolved or stayed the same, what elements made them powerful, timeless and insightful. Bicycle Thieves is a film that solidified my passion into becoming a filmmaker early on and still resonates with me. It’s an Italian neo-realist drama that had a revolutionary approach to filmmaking in that it really had a documentary sensation to it, with non-professional actors, camera style and honest, almost candid depiction of the economical landscape of the post-war time. It teaches me to immerse myself in environments with people and truly just observe and listen closely to every detail, especially the mundane.

I spend a lot of time trying to watch as many short and feature docs as I can to see how subject matters are covered and learn about what’s happening in the world through various lenses. So much to be inspired by! Laura Poitras’s docs are immensely influential to me, specifically Citizen Four; RaMell Ross’s recent film Hale County, This Morning This Evening was really enlightening and has given me an extra motivation and confidence in trusting my filmmaking style.

I love patient and subtle films that depict a sense of urgency in the mundane and ordinary realities of everyday life, whether it’s a doc or narrative fiction. Real people and stories that do not need to be sensationalised or dramatised but exist on the basis of human emotion and personal journeys. The balance between this and humour too is an art. I have such an admiration for cinematography, so I fixate on that also. Colours, light, angles that enhance the beauty in people, their stories and environments, that really completes a film.

Any and all collaboration really. The research stage of a new project is intense but always incredibly exciting, to be all in and around your own thoughts and start realising something into existence that you hope you can share with the world. I love all that goes into pre-production, as stressful as it may be. When you have an incredibly supportive, tight-knit team built, it’s always motivating, and limitations and obstacles are challenges you know you can overcome together. I’d say editing and sound design, being a part of that process and watching your vision come together in ways you might not have even expected is the most rewarding part of filmmaking, though. You find out the real meaning of your vision. 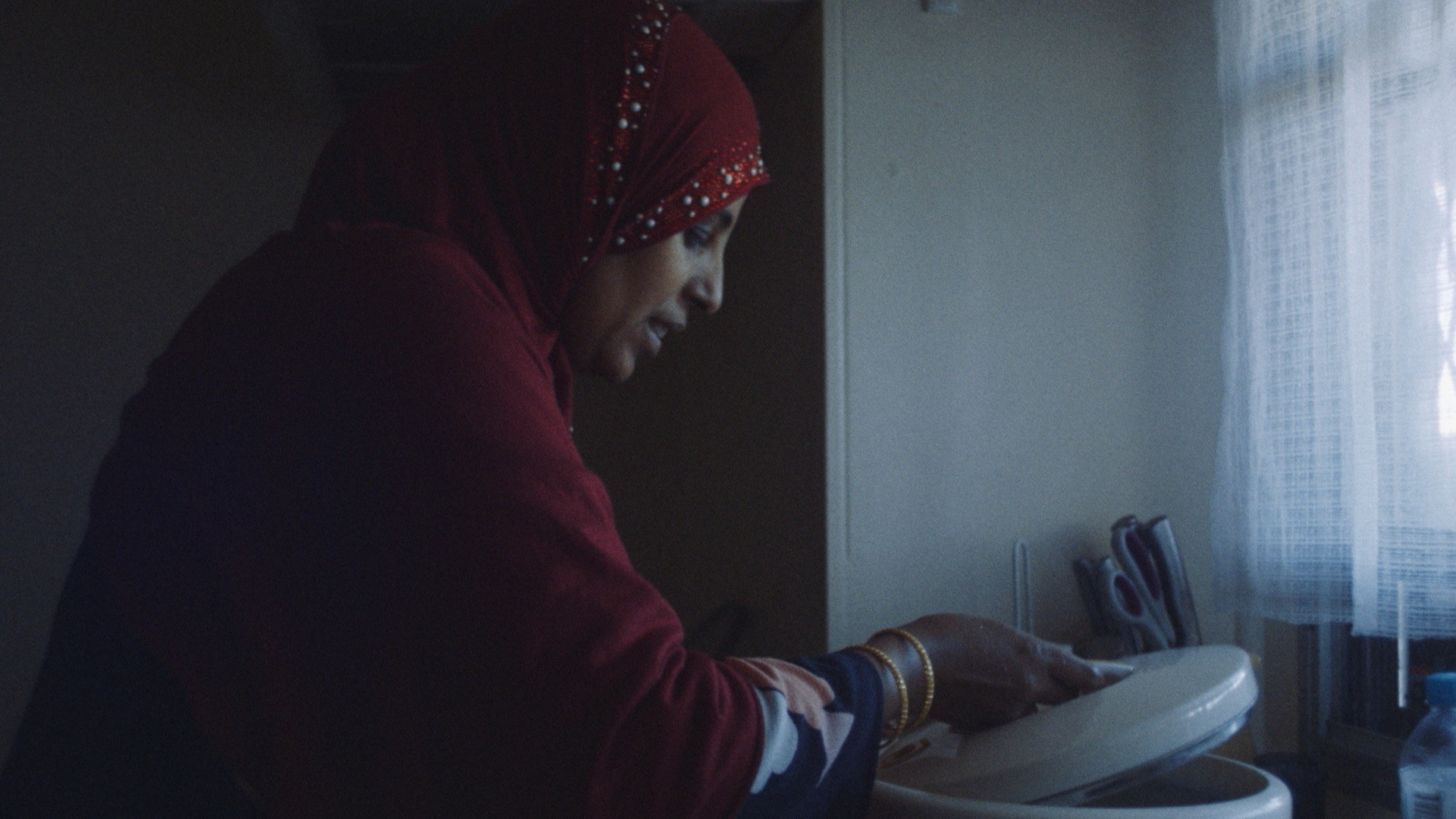 HAYAT was essentially my RMIT grad film in 2019. I knew I wanted to make a documentary, but I was looking for a story that didn’t feel forced and was still very personal to me as to establish my voice as a filmmaker. Rahma’s family I’ve grown up with, for years since they first migrated to Melbourne 15 years ago, but it had been a while since I spent much time with them. Before we started filming I visited them constantly and we somewhat reconnected, which was beautiful because I had missed being more involved in their lives. We had a great built up trust with each other which is why Rahma allowed me to later on film (there were lots of serious discussions though). She is like a mother figure to me and I recognised much in her as I did in my mother, a single parent, independent, strong, the most loving and selfless person you can have in your life.

But when you explore that there are also so many other factors and obstacles, especially as a Muslim and former migrant raising her children in a place foreign to what was once her own home, that she like many others must navigate predominantly alone. I learnt so much through her just like I continuously learn from my own mum. The eldest daughter Hayat (who’s name means life in Arabic) is like my little sister, and I saw much of my younger self reflected in her and still do. I have a great admiration for her, just being a regular adolescent, understanding her culture, the respect she has for her mum and family, but also part of that was a coming of age story, intricacies of identity and belonging due to being born and raised in Australia with differences in her culture, faith and upbringing, much of which that Western society may not understand. I wanted to provide a subtle and intimate lens into this world that shared part of my own life that I know many ethnic families can relate to. It felt important to give mainstream media insight into a narrative like this that is never really depicted accurately or represented in fullness.

Navigating funding and distribution nationally and internationally. Having knowledge and understanding of which avenues are best to go down or who to seek for production support especially once you’ve finalised and/or successfully premiered your film is a challenge.

I hope creatives in underrepresented communities are given more power and agency over their own voices. BIPOC filmmakers, and female specifically, need to be given opportunities to tell their own stories, whatever they may be, in fullness without limitations and a “check the box” approach. They may want to share stories, fiction or non-fiction, that shed light on issues and personal journeys they feel are not ever accurately represented, or perhaps want to make films that are entirely unrelated but it’s with their own unique vision. The point is just not expecting creatives of colour to only tell stories about their ‘struggles’ or experiences because of what they look like and only reward that, it’s not realistic and can be very limiting to potential and identity. I hope to see more young BIPOC filmmakers across Australia paving the way and leading mainstream spaces in the industry, inspiring others to follow and being celebrated more often. Sharing voices and real collaborations between different communities is so beautiful and powerful, it’s how humans connect and can identify with each other, film is an essential medium that allows for that and should be harnessed.

I think it’s very easy as an emerging young filmmaker to be intimated or deterred by the nature of the industry and getting support/ongoing support for a film you are passionate about. Especially as an independent filmmaker, you have to really be ready to commit to yourself. I’m still very early in my career but I believe just as in anything, no one will be as passionate and dedicated to your own vision and goals as you are. If you prove that dedication with perseverance and a proactive approach, it radiates, others will see that and want to be apart of that journey and process. Your story is always worth sharing but it’s also necessary to self-reflect and ask yourself why and what the most important part of that specific story is, which is advice I’m always given.

Most film productions can be very long and stressful so you need to keep the energy going and have a clear motivation that others can understand and stand by. You can always listen and watch interviews with other filmmakers and directors you admire and learn so much about their processes, they really usually answer all questions you may have. Also the power of taking charge of your networking and reaching out to industry professionals and other creatives. With social media it’s so easy to connect directly with people who you can speak to, share with, learn from, create professional or friendly relationships with.  LinkedIn is an incredible asset and film festivals. You can find like-minded creatives and support that can really stick by you for a long time and vice versa.

Rendah’s film HAYAT will be screening at the ReelGood Film Festival at Lido Cinemas on Saturday 20th March. To see the full programme and buy tickets, visit www.rgff.com.au

To see out more of Rendah’s work, go to https://vimeo.com/rendahhaj