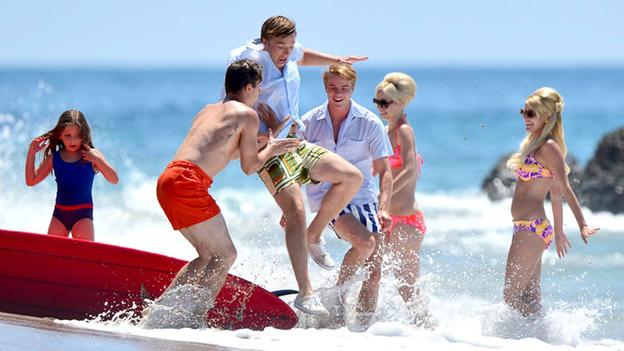 Get this. Not two days ago I was driving along, minding my own business and wondering why there hadn’t been a Brian Wilson biopic in this tidal wave of musician biopics that’s been drowning the cultural world over the past decade or so. Lo and behold, a trailer for Love And Mercy, a Brian Wilson biopic starring John Cusack and Paul Dano, was recently plonked on top of the internet. That’s a true story. They may make a film out of that one day. The problem is, if there’s one thing that we don’t need more of, it’s musician biopics. There’s nothing more excruciating than watching a film pretend that Jimi Hendrix had a more exciting life than he actually did. Nothing. Too late, because Love And Mercy is heading our way, whether we like it or not. We don’t like it.

“In the 1960s, young songwriter and recording savant Brian Wilson finds himself in the midst of extraordinary success after scoring numerous hit records with the Beach Boys. Following a panic attack, he resigns from concert touringand ventures into the studio intent on creating “the greatest album ever made”, Pet Sounds. Meanwhile, his grip on reality slowly loosens once his recent psychedelic experiences give rise to scattered voices in his head. Later, in the 1980s, a now-middle-aged Wilson is shown to be a broken, confused man under the pharmacological and legal thrall of therapist Dr. Eugene Landy. After meeting Cadillac saleswoman Melinda Ledbetter, she is determined to save Wilson from Landy’s manipulation.”

Love And Mercy stars John Cusack, Paul Dano, Elizabeth Banks and Paul Giamatti and is set for release in June, 2015.