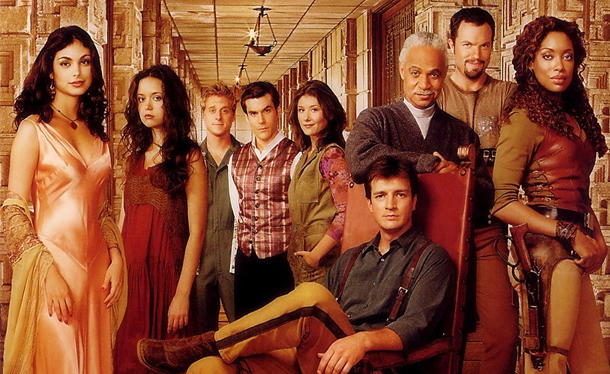 The one thing I have learnt from studying film is that Network executives suck the fat one. So many incredible shows have gone the way of Old Yeller thanks to poor marketing strategies and a lack of faith and funding from the studios. The following is my list of shows that, if given the right opportunities, could have gone on to have ridiculously successful runs. Enjoy!

Why CBS thought pulling a show starring the super sexy Kristen Bell as a schoolgirl was a good idea I will never know. Veronica Mars was an incredibly well written show with an always-intriguing seasonal arc that kept almost 2.5million viewers coming back each week. But despite the critical acclaim of the first season and several award nominations worldwide, the announcement came in January 2007 that Veronica Mars would not be coming back – much to the distress of fans everywhere.

The Comeback: If you haven’t heard of the world record breaking Kickstarter campaign launched by Kristen Bell and creator Rob Thomas, then I strongly suggest you yabba dabba destroy the flinstone you’ve been living under and get on the interwebs right now. When Warner Bros turned the pair down for a sequel they turned to the Internet and raised over $5.7million dollars from almost 90,000 supporters. Impressive, huh.

Greg The Bunny is essentially The Muppets for adults. Starring an A-list cast of Seth Green, Sarah Silverman, Eugene Levy and master puppeteer Dan Milano, Greg The Bunny rarely had a dull moment! I mean, who doesn’t love swearing, foul mouthed puppets that believe they are being racially mistreated (they prefer to be called Fabricated-Americans).

Why It Needs a Final Season: Have you seen Ted? If not, DO IT, DO IT NOW! And then go into JB HI-FI or something and buy this show. Ted is a perfect example of why turning lovable children’s toys into abuse assholes works and proves that there is a market for that kind of thing!

Pushing Daisies was such a bright, inventive and all-round ingenious show that was never really given a chance to compete with the majors. But it’s a sad truth that there is no room on network television for anything outside of the norm. Pushing Daisies pushed all the boundaries with its quirky humour following Ned, a pie-maker with the unusual ability to bring people back from the dead, his alive-again girlfriend and a criminal detective with not a lot of sensitivity training. In the end though, it seems as though the only thing Ned couldn’t bring back from the dead was the life of the show.

Why It Needs a Final Season: It was so incredibly refreshing to see something new… something inventive… something different on Television for once and it was such a sad shame to see that taken away! The ending was kind of wrapped up, but not really enough that left any kind of satisfied feeling in the audience, so a final season is definitely needed to revive the show and give it the ending it’s seven Emmy Award winning ass deserves!

Deadwood features in almost every single “Highest rated HBO show” list on the Internet and yet it still ended up on the networks chopping board floor. While it’s ratings were through the roof (as those that watched it, loved it), I guess it comes at no real surprise considering their budget was ridiculously high for such a small target audience (who would have thought that people who liked Shakespearian-like language wouldn’t also like booze, westerns, prostitutes and guns).

Why It Needs a Final Season: There are so many storylines, plot holes, character arcs, adventures and many, many more aspects of the Deadwood universe that need – nay – DESERVE to be explored!

It really is a shame to even have to include Happy Endings on this list, as it was primarily the American ABC’s fault the show rated so low. The third (and subsequently, final) season’s schedule was so poorly organized that it was nearly impossible for fans to keep up to date with when the show was airing. Which really is a shame as many have stated the show could have been the long awaited replacement of Friends. The quirky group dynamic had a similar vein to what a lot of people have in their own lives and was so true to form that it was always a pleasure to watch.

Why It Needs a Final Season: (Take a deep breathe, this sentence / rant could take a while!) Happy Endings was so beautifully written and featured characters that were so unique, lovable and relatable that it is such a shame that we never got to find out where the end up and how Penny’s wedding goes, or if Max actually decides to do something worthwhile with his life and its just such a shame that it was cancelled and is a prime example of a show that never got the recognition and attention that it truly deserved. (See, I told you).

NBC must surely be looking back on the decision to cancel Freaks and Geeks like Aussies are currently looking back on the decision to elect Tony Abbott. It is by far the crowning jewel of Judd Apatow’s career and lead to the future successes of Jason Segel, James Franco, Seth Rogen and Linda Cardellini. In just about every way the show was perfect. It accurately depicted what it means to be a teenager and dealt with common issues of identity, purpose and belonging in a way that was side-stitchingly funny and engaging.

Why It Needs a Final Season: Can you imagine how huge the reception for a rebirthing of this show would be? Seth Rogen, Jason Segel and James Franco are three of the biggest names in Hollywood comedy at the moment and If I had the money, would definitely pay to put those three on screen together.

What now? I know it’s a bit of a random addition to the list considering most of you never would have heard of it, but you really should try and get your hands on a copy! Ellen Muth stars as Georgia, a college dropout who is emotionally distant from her friends and family and really doesn’t have a goal in life. It isn’t until she is killed by a meteor (while sitting on the crapper – if the meteor alone wasn’t absurd enough) that she realizes how much more she should have valued her life. Now acting alongside Rube as a grim reaper, George can’t help but to feel sorry for herself as she moves on the souls of the deceased (who also die in ridiculous, yet hilarious ways).

Why It Needs a Final Season: It’s awesome that’s why and whichever monkey was in charge of promoting the show deserves the sack. The marketing of Dead Like Me was terrible and it never had a chance to really have an impact or reach its audience!

King of the cancelled show, Joss Whedon probably wasn’t too surprised when his last attempt at a TV drama was also pulled from air. By now he has probably just come to terms with the fact that many of his shows are just too daring; too adventurous for network television and Dollhouse was definitely no exception. To put it simply, the Dollhouse is just an enormous brothel that imprints empty shell-people with certain traits and personalities to make them bend to their clients every will (if you know what I mean).  As retarded as that all sounds, Dollhouse is a phenomenally complex and well-written show that keeps you coming back. Also, Eliza Dushku is pretty damn hot.

Why It Needed a Final Season: Season two, for the most part, was a rushed and disorganized mess. Whedon had to wrap up the season so that everything kind of made sense and was only given 13 episodes to do it in. Needless to say, there were dozens of other storylines that needed to be uncovered and several plot holes that a final season could fill.

Two episodes into the series I had already deemed Tim Roth as one of my favorite actors of all time. His convincing, subtly witty and all round perfect portrayal of Dr. Cal Lightman is by far one of the best acting jobs I have ever seen. And to think that only sums up one character, let alone an entire three season series is a damn good example of how well written and directed the show is. Not to mention the fact that every episode is a learning experience of how to read people’s emotions and facial expressions in a way that actually comes in handy in real life. Pure genius really.

Why It Needs a Final Season: There was no ending. Literally. At the end of the third season Fox cancelled the show and when a potential revival was discussed Tim Roth said he was too busy, so absolutely nothing was wrapped up. I won’t go into spoilers or anything, but there were some serious sexual tension going on that needed a resolution!

Was there ever really any doubt that this wasn’t going to appear at number 1? Firefly is by far one of the most unique and perfectly written shows that ever graced our TV screens and will always have a special place in millions upon millions of fans’ hearts. Don’t believe me? Literally walk up to any sci-fi, Whedon or television fan in general and it is a scientific fact that they will tell you to watch Firefly because it is just that amazing. To top it off, I’m pretty sure Nathan Fillion has it in his contract that every future role he plays must at least once reference the show. True Story.

Why It Needs a Final Season: I have more chance of finishing a half marathon than I do the answer to that question. And I f***ing love cake.