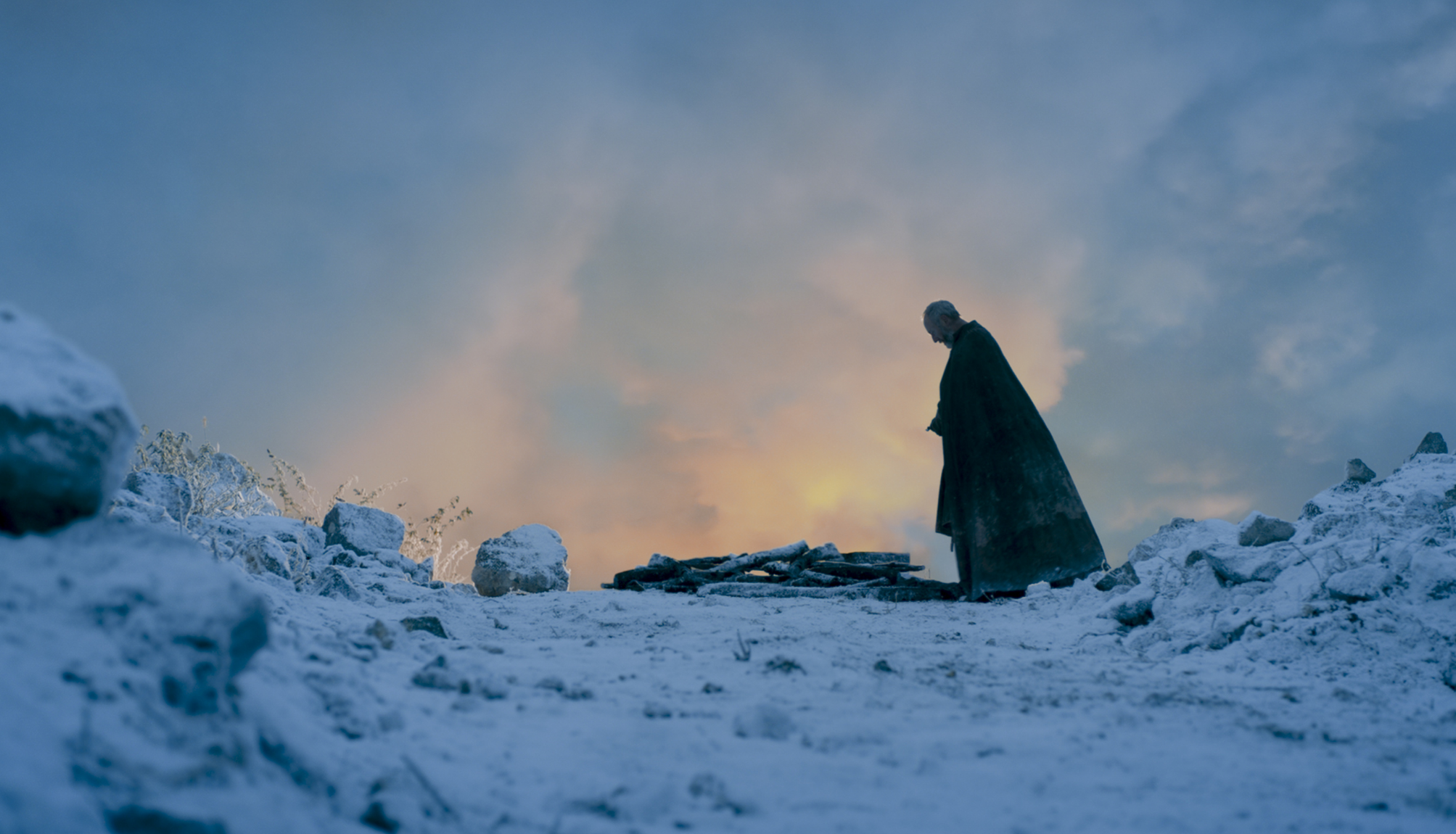 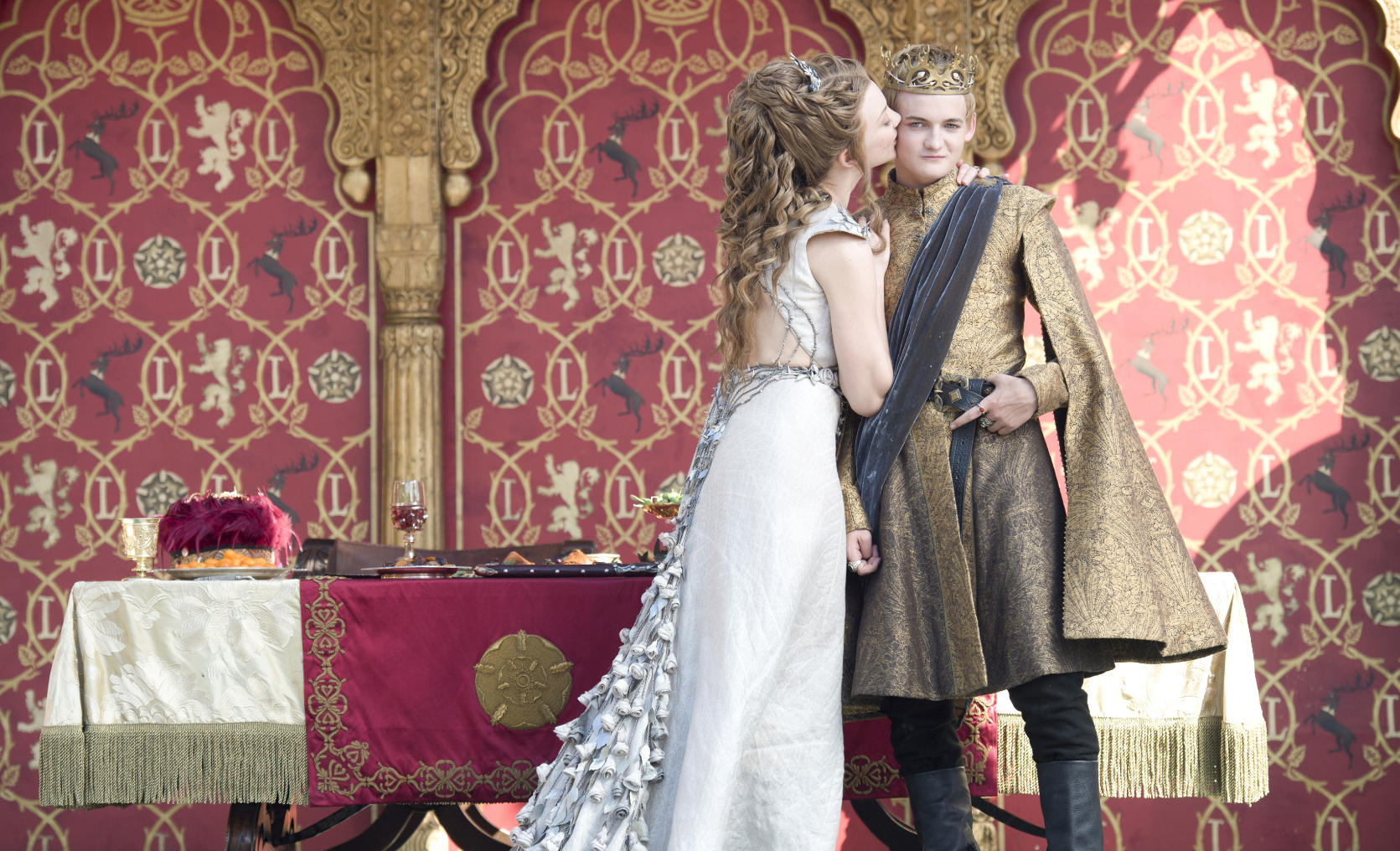 Long live the King! The King is dead. “The Lion And The Rose” episode arrived just a few episodes after The Red Wedding (although there was a year-long wait between seasons as well). Damned if it wasn’t a sprightly way to kick Season 4, still one of the best seasons of Game Of Thrones, into action. Even outside of The Purple Wedding and the untimely demise of Joffrey, the Justin Bieber of Westeros, there were some pretty real nuggets of quality in this episode. Bran prods the Weirwood tree and cops some visions in return, Ramsey tortures Theon more than any man should ever be tortured and Melisandre indulges in her enthusiasm for burning people. But it’s the death by poison of King Joffrey, up until that point an evil thorn in the side of the Seven Kingdoms, that makes “The Lion And The Rose” unforgettable. Ol’ Purple Face. The problem with arseholes in Game Of Thrones though, is that you knock one of and two more spring up in their place. 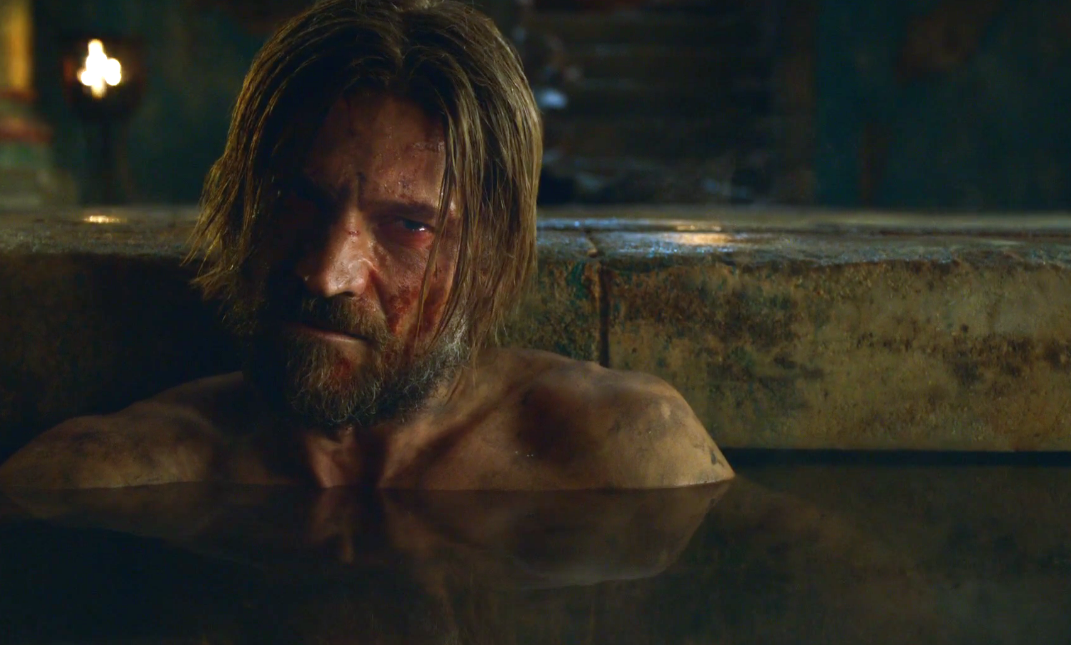 “Kissed By Fire” was the episode in which Jon Snow and Ygritte finally did the dirty in that cave north of the Wall. It’s also the episode in which Robb Stark executes Lord Karstark over the issue of the two dead Lannister boys, heralding Stark’s decline from King Of The North to King Of The Dead At His Uncle’s Wedding. There’s an outstanding fight between the Hound and Beric Dondarrion (who has a burning sword!), still one of the most exciting showdowns in the series. And then there’s the bath scene with Jaime and Brienne, a wonderful collaboration of brilliant acting and writing. The showrunners, David Benioff and D.B. Weiss, have made a number of questionable choices with Jaime’s character (one of the highlights of the source novels is the reevaluation of Jaime from how he is initially portrayed), but this scene is not one of them. It’s insight into one of the most fiercely guarded (emotionally speaking) characters in Westeros. Jaime’s honor was destroyed as a result of doing the right thing and he has never been able to live it down.

The Battle Of The Bastards | Season 6, Episode 9 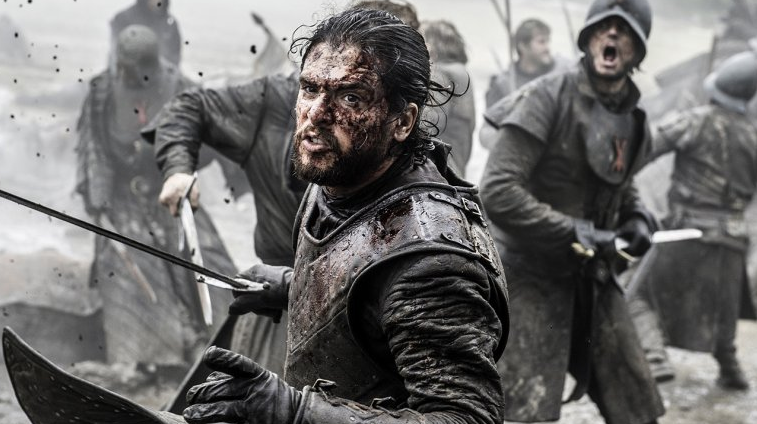 Game Of Thrones has some wonderful characters sure, but what would a large budget fantasy epic be without a handful of showy battle scenes? “The Battle Of The Bastards” had one of the best showy battle scenes of the lot. There was even a sly history lesson in the episode – the surrounding of Jon Snow and his troops by the Bolton army being lifted directly from the real-life Battle of Cannae between the Roman Republic and the Carthaginians under Hannibal. But there was more. Rickon died, leaving Bran Stark the last male heir of Ned Stark. And there was some ripper special effects involving Daenerys and her dragons. And Ramsey Bolton, the weird little shit, was fed to his own dogs. That’s poetic justice for ya. It’s a dog eat dog world. 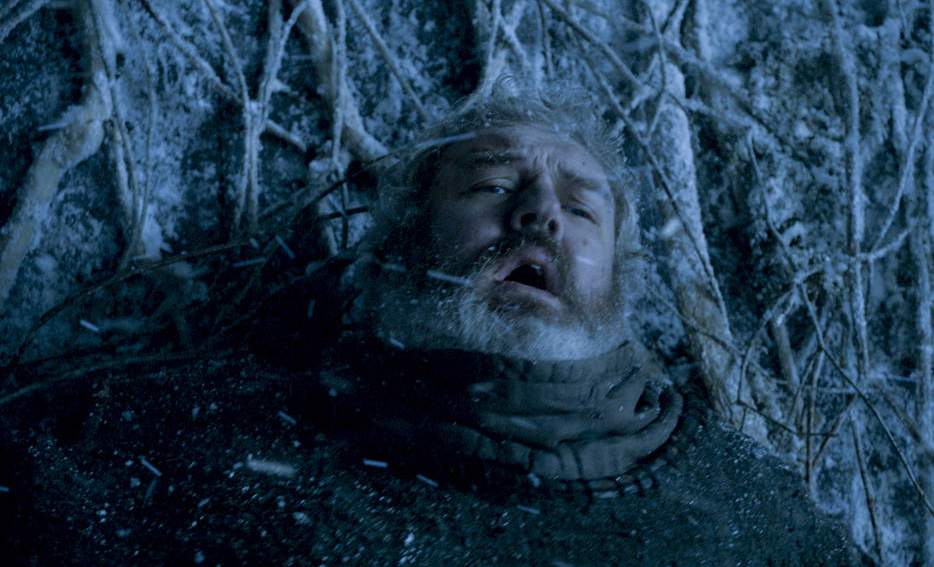 The episode was ok. The ending was unforgettable. Hodor was a simple fellow, who liked simple things. He didn’t like being north of the Wall, but he did it, because he’s Hodor. And now we know that the simplest of fellows is that way because of the most complex and tragic chain of events. His whole life had one purpose. To hold the door. Take a look at that image above and forgive yourself for the tears that start pouring out of your eyeballs. Hodor didn’t have an agenda. He wasn’t playing the game of thrones. All he wanted to do was to Hodor. And ultimately, he did. Thinking about Hodor’s body, all by himself at the edge of the world, is enough to make the most hardened of hearts thaw. We don’t know yet what Bran’s part to play is in the grand scheme of things, but if Hodor’s sacrifice was for naught, we’ll be crackin’ skulls. 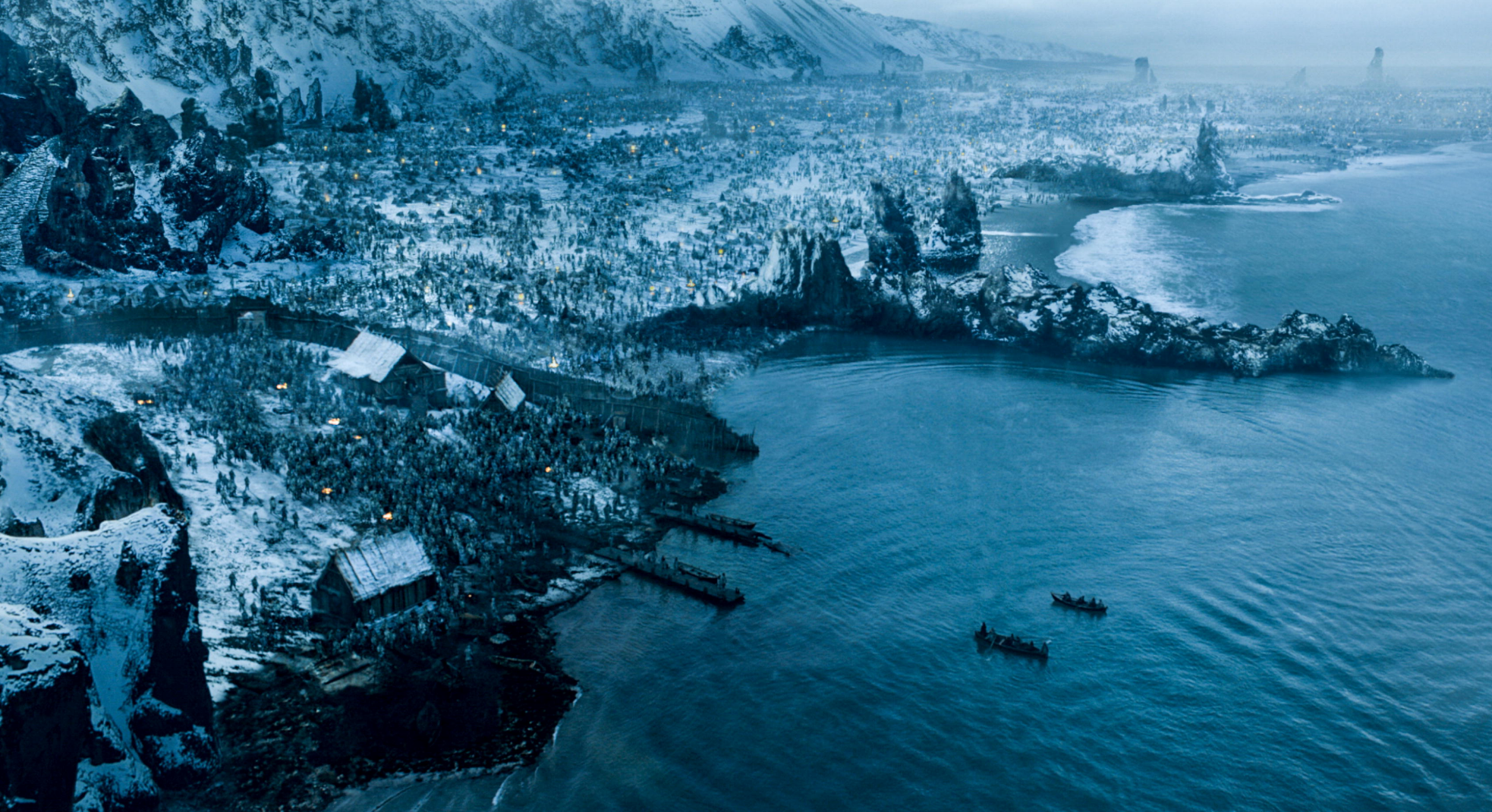 Three years after “Blackwater” upped the Game Of Thrones action stakes onefold, “Hardhome” upped them tenfold. The events at Hardhome were a minor part of George R.R. Martin’s source novels but a huge moment in the eighth episode of the series’ weakest season. It’s the first time that we get to see the full power of the White Walkers, with hundreds of thousands of Wildlings being massacred, only to be reanimated moments later to join the forces of the Night King. But “Hardhome” wasn’t limited to the wonderful action sequence. It also saw the meeting of Tyrion and Daenerys, Sansa confronting Theon and Arya getting her first murder mission. But it’s the battle, expertly directed by Miguel Sapochnik  (who would go on to helm some even more impressive episodes in the next season) that makes “Hardhome” stand out. It introduces and then swiftly kills a character that could have had her own show, the Wildling chieftainess Karsi and has a couple of ripper moments for the giant Wun Wun. And of course, there’s those chilling final moments, as Jon Snow drifts away and the gauntlet is well and truly thrown down by the Night King. 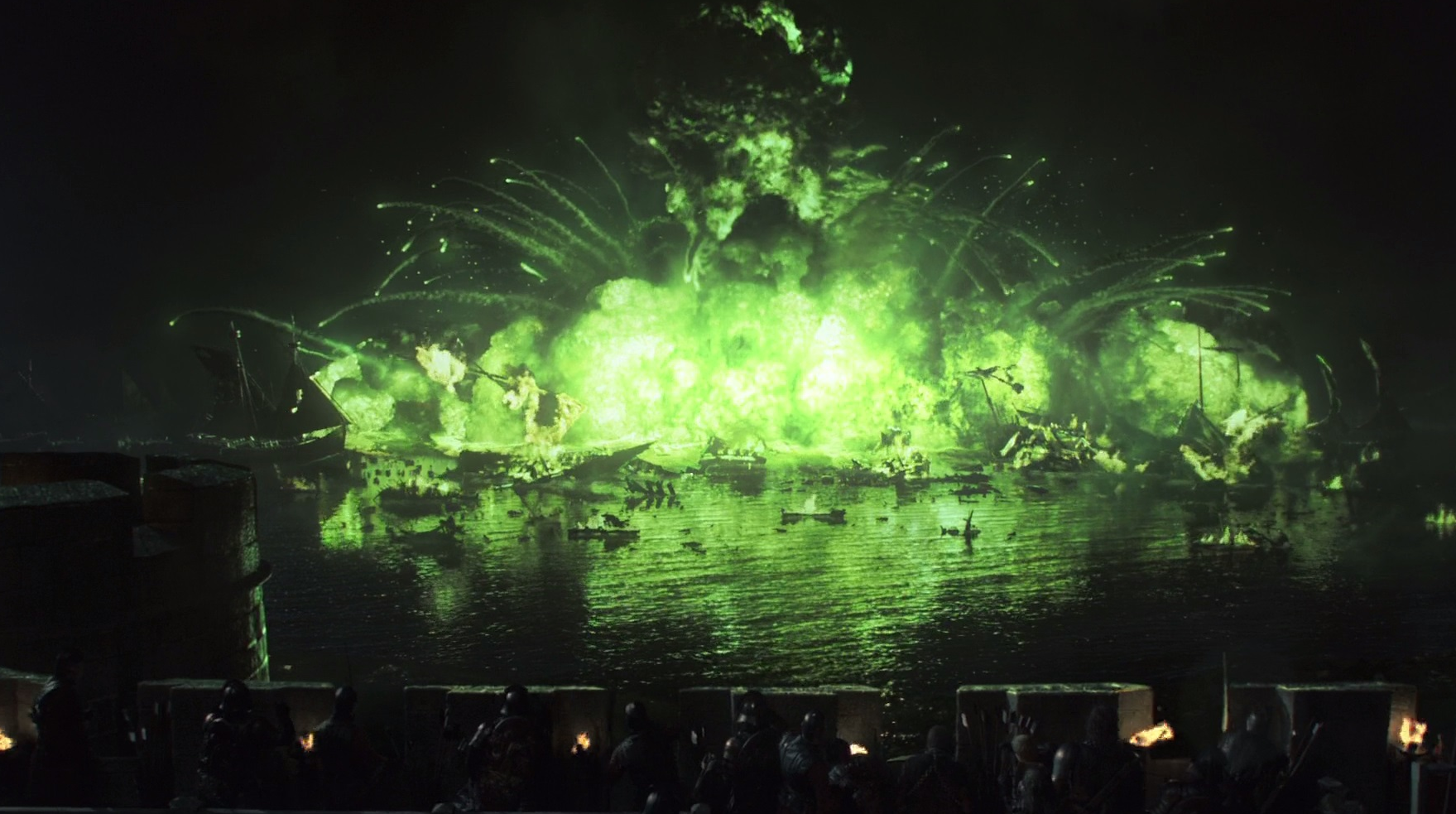 Following the success of the first season, readers of George R.R. Martin’s source novels were left wondering just how on earth Benioff and Weiss were going to be able to pull off the Battle of Blackwater, the enormous seige of King’s Landing from the second book. Benioff and Weiss’ answer was not only a couple of amazing shots with some nifty computer imagery of wildfire, but also a handful of character beats amidst the chaos that stand as some of the series’ best. Cersei almost poisons Tommen and herself, Tyrion leads the King’s Landing army into battle, Sansa and the Hound have a couple of nice (it’s all relative) moments, Tywin Lannister burst into the throne room at the end of the battle – “Blackwater” had it all. It was also the episode that the showrunners let the audience know that they weren’t going to half-arse Martin’s big moments – they were going large.

The Watchers On The Wall | Season 4, Episode 9 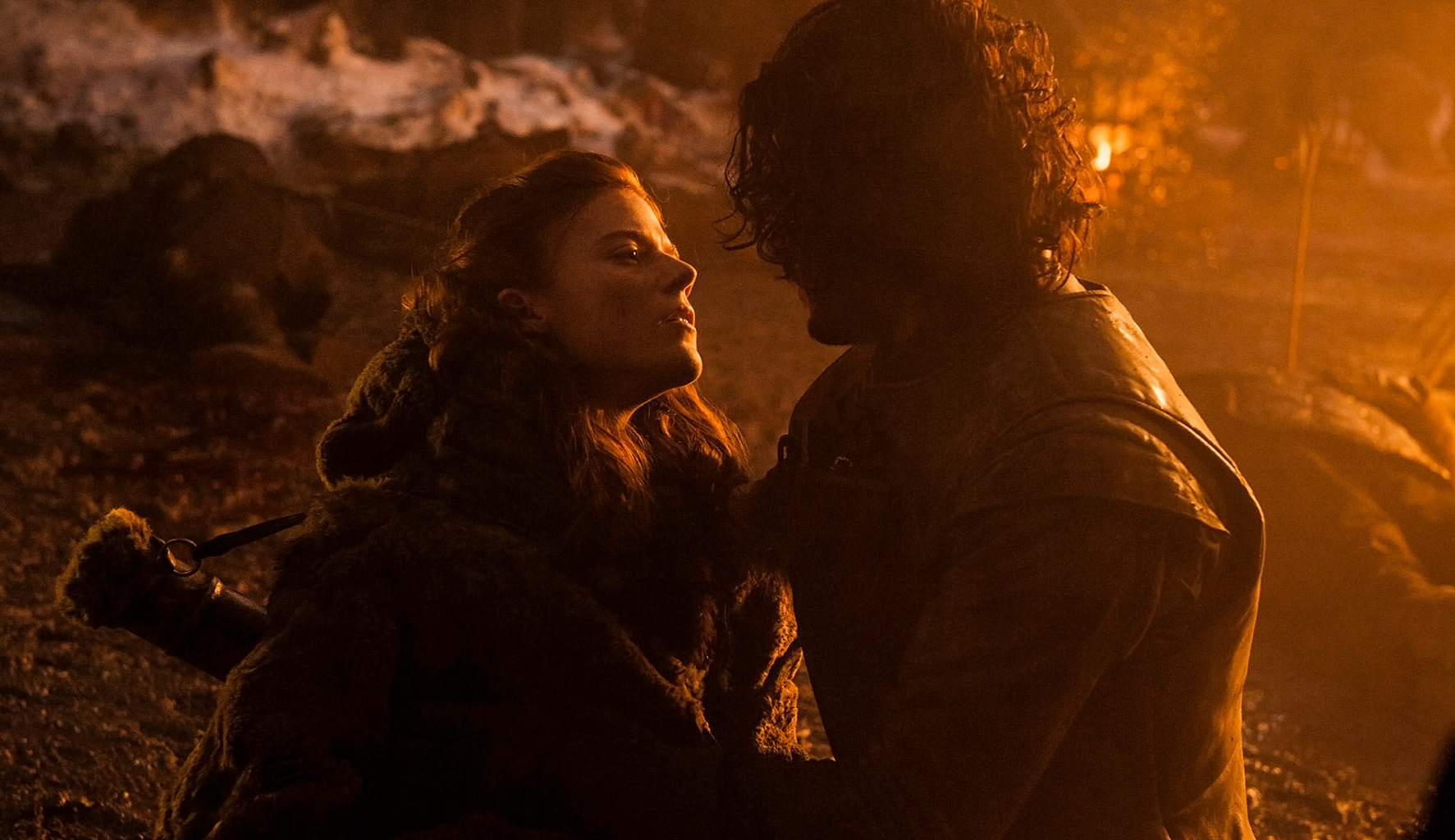 Haters gonna hate hate hate hate hate, but “The Watchers On The Wall” is the best large-scale action scene that Game Of Thrones has ever offered, and it lasted the whole bloody episode (lol, bloody). Directed by Neil Marshall, of The Descent fame (he also directed “Blackwater”), “The Watchers On The Wall” threw character development to the wind and allowed the Night’s Watch to do what the Night’s Watch do best – defend the Wall when the chips are down. Hindered by an abrupt ending due to the natural time constraints of the series, the episode was a breath of fresh air in a show that was increasingly hopping from one character to another too frequently without allowing any breathing room. And those long shots. Would you have a bloody look at those long shots? Hollywood action directors, take note. “The Watchers On The Wall” is a masterclass in how you establish space in an action sequence.

The Mountain And The Viper | Season 4, Episode 8 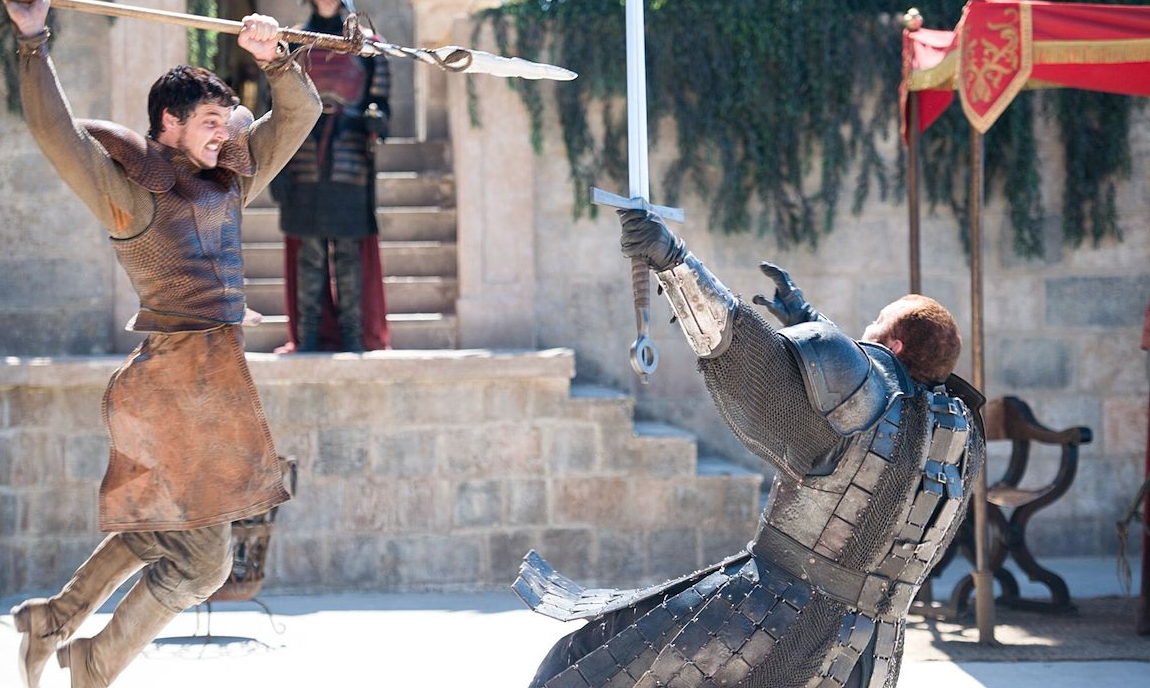 Oberyn Martell is wonderful. We all know that. Unfortunately, in Westeros, being wonderful generally means that you’ve got to go. It was tough reading the death of The Red Viper in Martin’s source novels. It was tougher watching it in Game Of Thrones, such was the energy and charisma of Pedro Pascal’s fantastic performance. Later seasons would give good guys well deserved victories. What’s heartbreaking about “The Mountain And The Viper” is that it gave us a well-earned victory, only to snatch it back out from under us. There’s more to this episode than the showdown between Oberyn and the Mountain. We could talk about that. We sort of just want to talk about the showdown between Oberyn and the Mountain. Because, fuck… 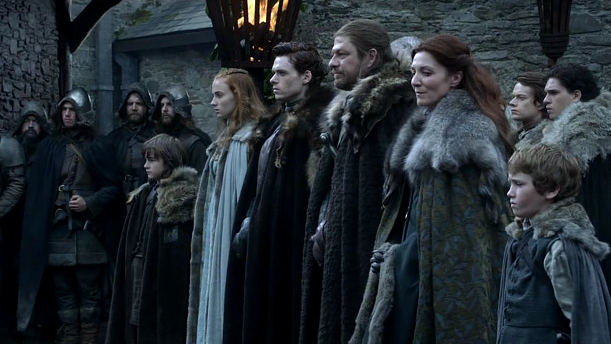 Sure, there would be better episodes than “Winter Is Coming” and Tyrion’s hair is weird blonde, but this is the one that started it all, and that be all there is to it. Remember when your friend was all like ‘Hey, check out Game Of Thrones‘ and you were all like ‘That sounds like a game show or something, go away’ but then you watched it and you didn’t think about anything else so you watched the first season three more times and then you read all the books while hitchhiking through New Zealand? Yeah, we remember that too. Season 1. Episode 1. How am I all of a sudden watching the TV I’ve wanted my whole life?

The Rains Of Castamere | Seasons 3, Episode 9 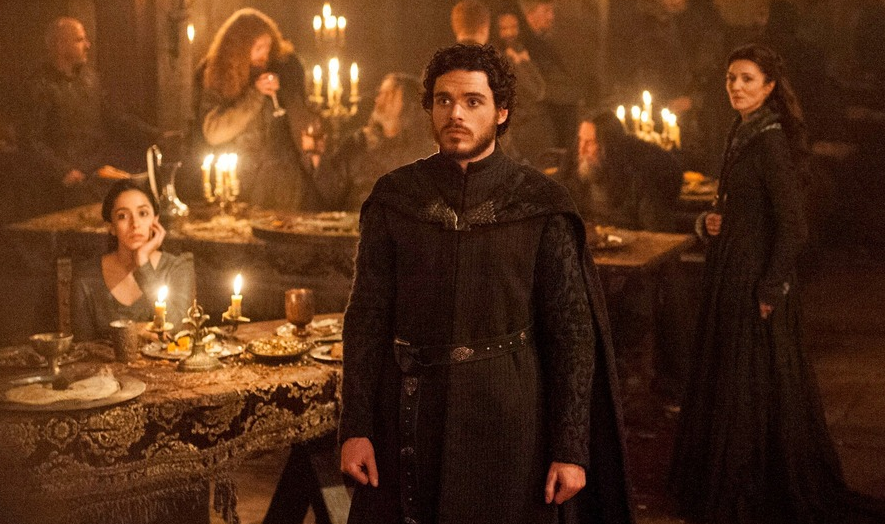 This was the real kick in the teeth in a show that is pretty much made up of teeth kickers. We had barely finished chanting THE KING OF THE NORTH and poor old Robb Stark was lying dead on the dining room floor at The Twins. The Starks may slowly be recapturing some ground here and there, now that we’ve just finished the sixth season, but there was a long while there when Ned Stark and his family just couldn’t catch a break. Just like in Martin’s source novels, “The Rains Of Castamere” lures the audience into a false sense of security, and then reveals its true intentions with a whole lot of stabbing and a whole lot of slitting. Reportedly, it was this scene in the novels that prompted Benioff and Weiss to pursue the rights to adapt Martin’s work in the first place. Yeah, it’s rough. 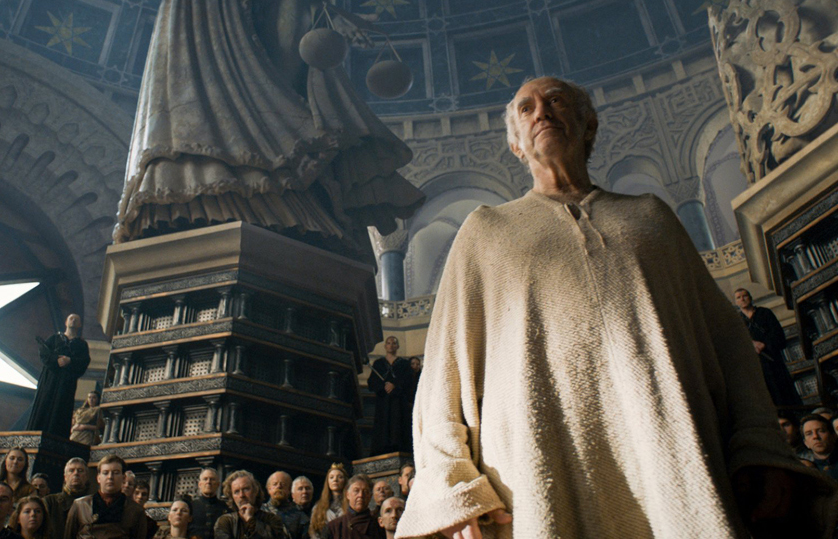 Any episode that knocks off the High Sparrow is alright in our books but it’s for everything that occurs after Cersei’s explosive response to her trial in the High Septum that earns “The Winds Of Winter” a place on this list. Tommen kills himself with little fanfare, fulfilling the grisly prophecy that all of Cersei’s children would die. The thing about Tommen’s death though, is that it was sorta caused by Cersei herself. But what “The Winds Of Winter” really did well was come through on the promises that have been in states of arrested development since they were first hinted at towards the end of the first season. Daenerys Targaryen is finally on her way over to Westeros, after years of mulling about doing not much of anything on some other bloody continent. Arya Stark is finally becoming the badass assassin she seemed destined to become after the death of her father and the tutelage of Syrio Forel. Jon Snow was finally confirmed as a legit presence within the grand scheme of things, not only by being crowned the King Of The North but also by the confirmation of the classic R+L=J theory. Simply put, “The Winds Of Winter” delivered on years worth of promises. 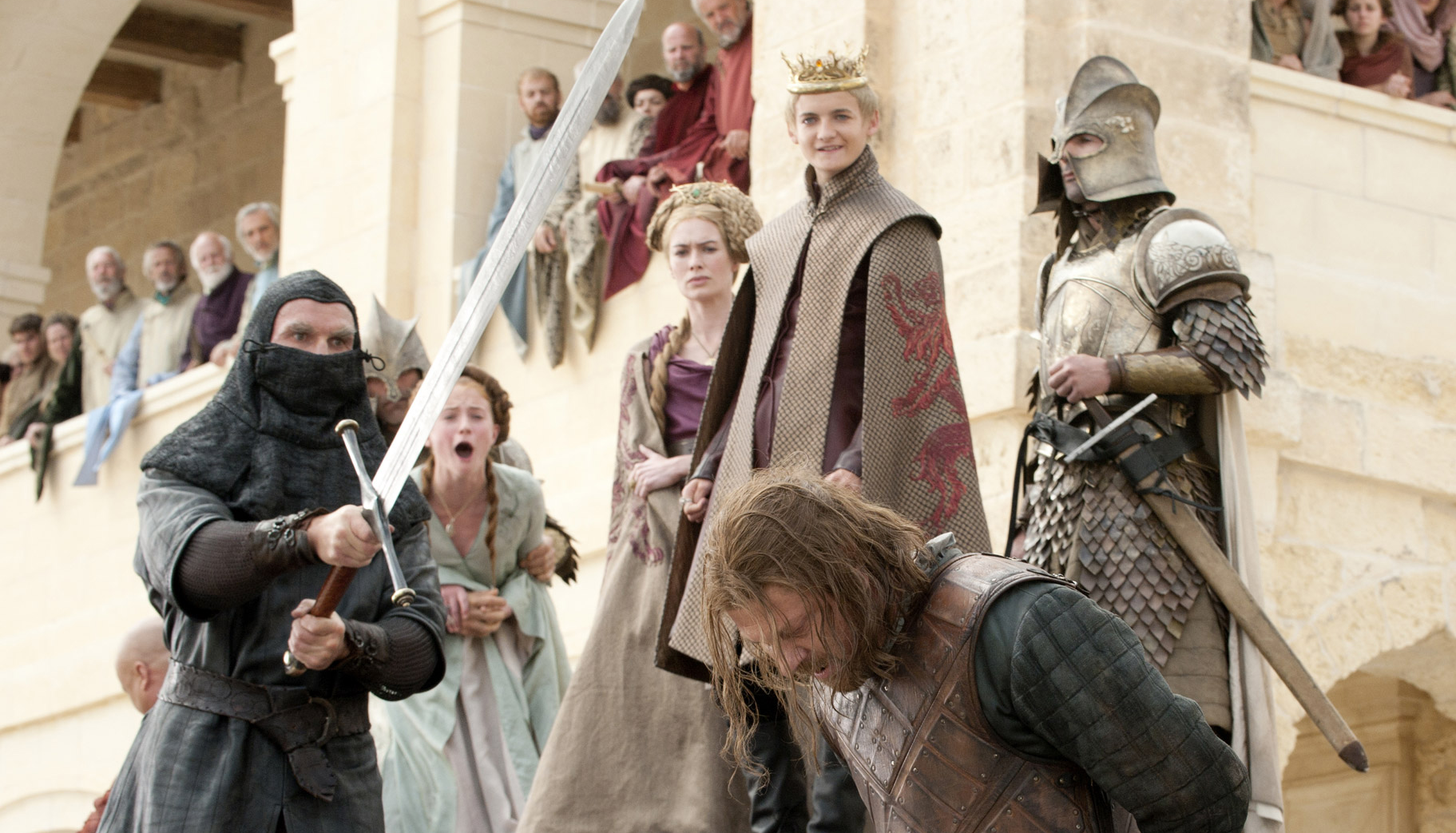 Fare thee well, Ned Stark. We barely knew ye. Remember 2010? It was a simpler time, a time when the main character of a television show would never be just knocked off without any warning. Then 2011 rolled around and they went and killed Ned Stark, the pack of scumbags. Honestly, what the hell. But if we’re thinking about it rationally and we’re putting the narrative ahead of our tears of grief then Ned Stark’s death is probably the best thing that ever happened to Game Of Thrones. The Red Wedding, for all of its shock value, achieved nothing other that stopping plot lines. The death of Ned Stark propelled things forward in a way that has yet to be rivalled by any single event in the show. Arya was let loose on the world, Robb Stark was crowned the King of the North, Theon was sent back to the Iron Islands, Stannis Baratheon began to rear his head and the stakes of the whole bloody affair rose beyond the limits of stake measures. Ned Stark was a character who might have made all the difference had he survived. Imagine a Game Of Thrones with Ned still around. Wouldn’t be no Game Of Thrones, now, would it?