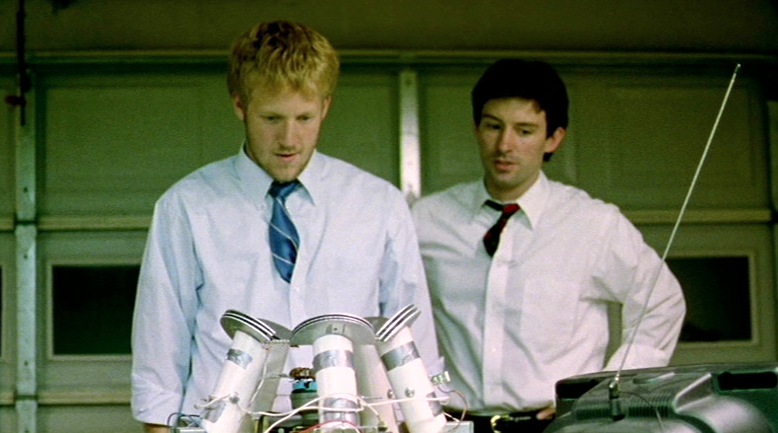 If Steven Spielberg and Philip K. Dick seem like strange bedfellows it’s because they probably are. Sure, both are inextricably linked with the science fiction genre, but you’d struggle to argue that E.T. The Extra Terrestrial and Close Encounters Of The Third Kind subscribe to the same train of thought as “Do Androids Dream Of Electric Sheep” or “Total Recall”.  Spielberg’s discomfort with Dick’s material is obvious and Minority Report is a peculiar mix of both sensibilities. It’s nonetheless extremely watchable and Colin Farrell’s Danny Witwer is so implausibly he ends up being kind of entertaining, in a ‘Colin Farrell is being annoying’ kind of way.

One of the more low key science fiction films on this list, you won’t see flying cars or aliens running about in Mark Romanek’s Never Let Me Go. Adapted from Kazuo Ishiguro’s bestselling, Booker Prize short listed novel of the same name, the film follows Kathy, Tommy and Ruth, who have spent their childhood at the English boarding school, Hailsham. Seems great, sure, but what about all the organ harvesting?

One of the better examples of the recent onslaught of found footage films (does eight years ago still count as recent?), Cloverfield kick-started director Matt Reeves’ career (he made Dawn Of The Planet Of The Apes, another great modern sci fi) and was recently complimented by the sort of but not really related film, 10 Cloverfield Lane.

The first half of Sunshine is amazing. The second half is awful. But the first half is so great that it still makes this list. Directed by Danny Boyle and written by Alex Garland (who has another film on this list), Sunshine sort of tries for the title of Best Science Fiction Film Ever Made and falters in its attempts. Valiant attempts though, but you sort of have to be as smart as Stanley Kubrick to successfully emulate Stanley Kubrick. Still, great cast, great atmosphere, great set-up and Chris Evans is always welcome.

Another film with a less than stellar second half, Looper is here because of the wonderful first hour. It’s wonderful on the proviso that you’re willing to overlook the awful make-up job on Joseph Gordon-Levitt, which was intended to make him look like a young Bruce Willis but actually makes him look like a normal aged Joseph Gordon-Levitt with Play-Doh on his nose. Shout out to Paul Dano, whose small role is one of the most memorable parts of the flick, and Bruce Willis, who never ages and so probably could have just played a young Bruce Willis.

There are people within the ReelGood office who far prefer Neill Blomkamp’s later works, Elysium and Chappie, but general consensus and cultural impact declare District 9 the victor. Made for a relatively measly $30 mil, District 9 went on to haul in over seven times that at the international box office. It’s simple story telling done well, and what it meant was that we’d be getting a string of very similar films set in South Africa every couple of years from then on. Blomkamp is nothing if not persistent.

Gravity won all of the awards and then everyone kind of just forgot about it, but it’s an enormously enjoyable film with a performance from Sandra Bullock that finally kind of earned the one she’d somehow won for The Blind Side. The film is relentlessly tense, perhaps absurdly so, but it’s difficult to deny the raw energy that director Alfonso Cuarón generates and then never extinguishes. Plus, George Clooney dies, left to float forever in space.

Primer was made for $7000. Let that shit sink in for a moment. To put that into a bit of context, there are films on this list that cost almost two hundred million dollars. Primer was written, directed, produced, edited and scored by Shane Carruth, who also decided to star in the main role, probably because he just didn’t have enough to do. It’ll make your brain hurt, but it will also make it soar. If you haven’t seen Primer then what are you still doing reading this?

David Bowie once sung about the ‘Starman’. Decades later, his son would direct a film about a man living in the stars. Well, he’s living on the moon, but you surely get what we’re going for her. Fuelled by a stellar (DO YOU GET WHAT WE’RE GOING FOR THERE???) performance from Sam Rockwell, who is always wonderful, Moon was a phenomenal directorial debut for Duncan Jones. He has yet to match it.

Just when we thought Ridley Scott had decided to only make bad films from now, The Martian (which looked bad prior to its release) came along and took us all by surprise. It just goes to show what Scott can do with a good script (Damon Lindelof, we are looking at you) and a top notch cast. What’s so wonderful about The Martian is how positive it is, especially in today’s culture of cynical blockbuster filmmaking. There’s no antagonist and no antagonism. Everybody just works together to get their man home.

Who would have thought that a film could have anything fresh to say about artificial intelligence? Lo and behold, Ex Machina did just that. Alex Garland was no stranger to science fiction but this was his directorial debut and he absolutely knocked it out of the park. Ex Machina was a sci fi more concerned with ideas than visual effects, but was still a visually striking film than never got so lost in thought that it became dull.

Charlie Kaufmann is one of the most creative and talented screenwriters the film industry has ever seen and Eternal Sunshine Of The Spotless Mind is one of the best films he’s ever written. It also has a remarkable performance from Jim Carrey – usually known for his extreme screen presence, here almost unrecognisable playing the low key, downtrodden Joel. We all have memories and actions that we’d probably like to erase. But should we? Sometimes it’s the bad memories that make us who we are.

Inception was on the receiving end of a lot of backlash after its release, a lot of people scoffing that it ‘wasn’t as smart as it thought it was.’ Perhaps that’s true, who knows? Who cares. It’s a heist film set almost entirely in someone’s brain! Clever isn’t important when it comes to Inception, but cool is, and Christopher Nolan’s film is one of the coolest blockbuster releases of the past ten years. That hotel hallway fight is one of the most exciting action scenes ever committed to film. That’s an opinion, not a fact, but this is a movie website, so our opinions are rock solid.

Oh Wall-E, you charming little bastard. The way Pixar convey the message behind Wall-E might be heavy-handed, but that doesn’t mean that it’s not important, and relevant. And the little robot is just such a champ. It’s the sort of film that could convert even the most fervent Pixar pessimist. It involves compelling ideas, it looks wonderful and the storytelling from director Andrew Stanton is enchanting.

Children Of Men kind of came out of nowhere but geejimminyjillakers it’s an absolute ripsnorter of a film. It’s the future and mankind has lost the capacity to conceive. The premise is simple enough but it’s the execution of Children Of Men that makes it remarkable. From the comprehensive and engaging world building to the breathtaking long shot action sequences (how there wasn’t an influx of long shot action sequences in the world of film following Children Of Men is beyond us) to the matter of fact way Cuarón presents the necessary information. Children Of Men is one of the most underrated films of all time and it is undoubtedly a science fiction masterpiece.