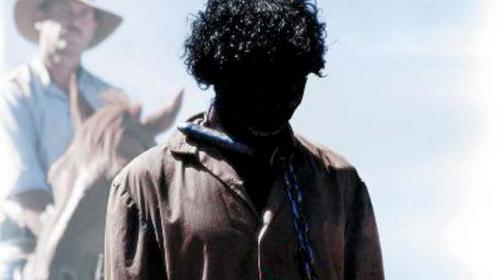 As the campfire crackles and the night chorus of Australian bush insects bear witness, ‘The Tracker’ (David Gulpilil) has outsmarted his colonial captors. ‘The Follower’ lays unconscious (poisoned), and ‘The Fanatic’, representative of all brutal colonial oppressors, sits bound and degraded, awaiting justice.  In an emotionally charged moment, ‘The Tracker’ finds ‘The Fanatic’ guilty of extreme acts of atrocities against “all people”, and sentences him to death by hanging. As the body hangs with the rising sun, and Archie Roach’s voice soars across the land, justice is delivered on behalf of all Indigenous Australians, and a call for a new era of recognition and reconciliation is demanded.

Director Rolf de Heer has long been regarded as an Auteur of Australian cinema, delivering a catalogue of films that defy Hollywood conventions, challenge stereotypes, and in his later works, give voice to Aboriginal Australians. The Tracker is an evocative film that explicitly depicts the extreme racism and genocide inflicted on Indigenous Australians, while at the same time celebrates and admires their culture and intelligence. This scene serves to give recognition and justice to the Aboriginal people.

The inclusion of iconic Indigenous actor David Gulpilil as ‘The Tracker’, works to celebrate indigenous representation in Australian cinema and the legacy of his work. Unlike previous films that often portray indigenous Australians as the proud barbarian, drunk or aggressor, De Heer presents ‘The Tracker’ as an intelligent, witty, cultural and emotional being. This scene is of great importance to this history, as it features an indigenous character as both lead protagonist and hero, a role rarely reserved for a non-white Australian.

Stunned and degraded, the scene begins with ‘The Fanatics’ poor effort to save his life as ‘The Tracker’ prepares to hang him. In a misguided attempt to justify his life actions and take the moral high ground once more, ‘The Fanatic’ reflects, “You could not serve almighty god any better than by improving their (Aboriginals) poor degraded lives”. Previously shot from low angles, and riding high on horseback, ‘The Fanatic’ is now symbolically bound to a tree by the very chains used to suppress the indigenous people, and is shot from higher angles, rendering him inferior to ‘The Tracker’.

Shot from a low angle, now a new figure of authority, ‘The Tracker’ powerfully assumes the role of Judge, Jury and executioner as he strings ‘The Fanatic’ to his feet.  With a calm, courtroom style delivery, Gulpilil sentences ‘The Fanatic’, who is representative of all oppressive, violent and racist whites, to hang until dead. This delivery, in conjunction with the visual weight of the chains, is an evocative realisation of Justice for the Aboriginal people, and emotionally engages the viewer to reflect on the immense atrocities inflicted upon them.

In this moment, De Heer avoids the portrayal of Indigenous Australians as ‘The Other’, and paints all people as equal. As ‘The Tracker’ sentences ‘The Fanatic’ to death, he punishes him for crimes against not only Aboriginals, but “all people”, forfeiting the antagonists “right to live among his fellow humans”. This dialogue works not only to acknowledge ‘The Fanatics’ gross mistreatment of both Aboriginal people and his fellow ‘white’ travellers, but recognizes European and Aboriginal people (and all other races) as ‘one people’.

Rather than explicitly showing the violent image of ‘The Fanatic’ choking to death, and in Keeping with the rest of the film, De Heer presents the viewer with a painting by Peter Coad. The visual impact of the painting of a chain against the Australian landscape, in conjunction with the emotionally charged music, works as a powerful tool for reflection and celebrates the Aboriginal tradition of telling stories through art.

The accompanying and highly emotive song sung by Indigenous musician Archie Roach, is the pinnacle of the scene. His powerful voice echoes with pain and sadness for, and in the name of his people, “You have taken my country, fought me, killed me, exterminated by your hand, I have lost all my being”. Roach’s hauntingly beautiful voice matches the conviction of Gulpilil’s delivery of justice, the powerful lyrics working as a direct message from the indigenous Australian’s to their oppressors. Although written by the ‘white’ de Heer, the lyrics powerfully evoke the painful history inflicted on indigenous Australians. “They’re my words, those words belong to my people!” – Archie Roach adopts the potent lyrics of De Heer and proudly projects them on behalf of his fellow Indigenous Australians. In this moment, both Gulpilil and Roach stand tall together in the name of their people and command respect and recognition.

The lingering shot of the sun rising over the land, with the silhouetted body of the ‘Fanatic’ hanging in the trees is both beautiful and disturbing. The rising sun represents a new beginning, a new day that will bring peace, justice, reconciliation and respect for Indigenous Australians. The swaying European body lay’s to rest the brutal, racist and authoritarian control of the white man over Indigenous Australians, and the overwhelmingly powerful moment is burned into the minds of the viewers, demanding attention and reflection.