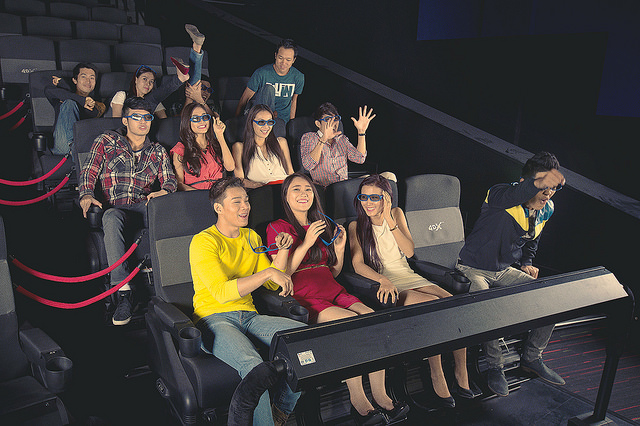 If we fiddling with our phones while watching a movie is culturally unavoidable then the concept of Second Screen apps may just be logical evolution rather than needless electronic consumerism. Second Screen apps are nothing new, having developed a welcome albeit gratuitous presence within the mediums of television and video games over the past couple of years, although the trend has yet to find widespread enthusiasm within the community of film and filmmaking.

The idea behind Second Screen apps involves the idea of employing a computing device (usually a smart phone or a tablet) to enhance the experience of watching a movie or television show or playing a video game. AMC’s The Walking Dead has one of the most popular companion Second Screen apps, while the video game industry has embraced the concept as far back as the age of the Sega Dreamcast. The PSP and the way in which it can interact with the Playstation 4 is arguably the most dominant example of a second screen in video gaming at the moment.

Within the film industry, more prevalent Second Screen apps include Marvel’s The Avengers companion and the app that accompanied the Home Theatre release of James Mangold’s The Wolverine. If it seems like the presence of a second screen would be detrimental to the attention capacity of a film watcher that’s because it probably would be, but this is a direction that visual entertainment consumption is headed, for better or for worse.

Way back in 2000, the year that Gladiator, Almost Famous and Crouching Tiger, Hidden Dragon were released, entertainment titan Blockbuster passed up the opportunity to buy a fledgling movie subscription business in small-town California for the relatively measly sum of $50 million dollars. Flash forward fifteen years and Blockbuster’s standing within the international film distribution and exhibition industry is precarious at best while Netflix, the dominating On Demand film streaming service, has over fifty million subscribers globally. And the industry of film streaming is only just hitting its stride. As the Netflix audience reach grows, so does their ambition and their budget to realise that ambition.

“We’re now at the scale where we can economically create original content, and we’ll continue to grow our slate,” says Netflix’s Head of Corporate Communications Cliff Edwards. And he’s making good on that promise, with hit properties like House Of Cards, Orange Is The New Black and Wet, Hot, American Summer proving that streaming services are a viable option for successful, original content. And Netflix isn’t the only streaming service in town. HBO On Demand and Amazon operate on a similar subscriber-only basis.

But it’s undoubtedly Netflix, the streaming giant, that charging ahead. “Netflix is nearing device ubiquity”, says Edwards, “meaning that if it’s got a screen and can connect to the internet you should be able to watch Netflix on it. In terms of technology development, Netflix is based in California’s Silicon Valley instead of Hollywood for a reason. At heart, it’s a company teeming with engineers who are looking for ways to innovate.” With Netflix boasting compatibility with nearly every form of screen on the market and the film industry in somewhat of a quandary regarding effective distribution, the obsolescence of film and television consumption in the classical sense doesn’t seem particularly farfetched. Studios should be worried about how far behind they are.

It’s almost like a Choose Your Own Adventure type deal, but you’re at the movies. Interactive movies have been around in some shape or form since at least as far back as the 1960s, although new technologies such as WebGL are seeing a resurgence in interest in the concept. The idea is to bring the audience as far into the narrative as possible, allowing them to participate and make choices that will affect the outcomes and the characters of a film. One example of this is the Run Lola Run-inspired film, Turbulence, which allows the audience to influence key plot points.

Another example of interactive film is filmmaker Vincent Morisset’s BLA BLA project, which ran at a museum in Paris for a season. Morriset re-examined and reshaped the idea of traditional narrative filmmaking and transformed a web-based film into an interactive art installation. Thanks to motion detectors, surround sound, cameras and sensors, a living world was created that visitors could walk through and interact with.

Avatron Development USA is developing venues, which could be arriving in cities across America as early as 2017, that include theatres where a 3D movie is projected onto a 360-degree dome-shaped screen, with real-time facial replacement technology being employed to project audience members into the onscreen action.

“You’d have a wristband that identifies who you are, and if you elect to, your body and face can be scanned, allowing the attractions to include you in them and allow you to interact with them,” says Academy-Award winning VFX supervisor Joel Hynek, the head of the creative team behind the project.“It will be the closest we’ll come to being on the holodeck.”

3D Without The Glasses

“I believe 3D is inevitable because it’s about aligning our entertainment systems to our sensory system. We all have two eyes; we all see the world in 3D. And it’s natural for us to want our entertainment in 3D as well. It’s just getting the technology – it’s really more the business model than the technology piece. We’ve solved the technology.” Back in 2009, James Cameron’s notions regarding the imminent acceleration of 3D technology within the film industry might have sounded definitive. But Cameron’s confidences sometimes outstrips his own reality and five years later 3D still isn’t met with the widespread acceptance that the Avatar director expected.

The technology just isn’t quite there yet. 3D saturates the image with a murky quality, dimming the image of a film, while audiences are resistant to the idea of having to wear clunky glasses when they go to the movies. Perhaps Cameron just spoke too soon. An evolution in 3D technology is underway, with Toshiba, Nintendo, and Sony, among others, working on high-quality, glasses-free 3D imagery.

One technology aiding the development is lenticular lens technology, which are essentially bumpy screens that redirect light to each eye, consequently letting us process two different images at the same time – just like we do in real life – giving the perception of depth. Another technology is the parallax barrier, which is a grating that’s put in front of an LCD screen, with slots blocking out different parts, allowing us to perceive in 3D.

A glasses-free, 3D television called the Ultra-D has been making the rounds at technology summits around the world for a couple of years now, with the hope to see TVs using the tech in homes by later this year.

Back in the 1950s, with the advent of televisions, Hollywood retaliated with Cinerema, a panoramic theatre configuration that had all but faded out by the late 1960s. Nowadays, ss home theatre systems grow larger and more impressive every year, exhibitors and cinema developers are once again pursuing new avenues to entice audiences. Barco, a Belgian digital cinema projector manufacturer, has unveiled their development called ‘Escape’, a cinema configuration that utilises a digital cinema screen in front of the audience and two more screens on the side of the theatre to create one wrap-around image. “There will be more panorama screens; it’s already happening in Germany,” says Siegfried Foessel, one of the head developers for German research firm, Fraunhofer Institute for Integrated Circuits.

This concept of transforming theatres into high-tech theme parks is become a widespread phenomenon. Orbi, a high-tech cinema-based experience recently opened to the general public in Yokohama, Japan. With SEGA technology and content from BBC Earth, the experience guides the audience through a multi-sensory journey as they explore animals and nature through sight, smell, touch and sound. The potential of possibility, should this concept breach mainstream cinema, is staggering. Imagine being able to smell and touch Middle Earth.

With games like The Last Of Us and The Witcher 3 matching, and in some instances, surpassing the creativity and possibility of cinema, the fusion of film and game seems more imminent than ever. Video games can deliver the high-production values of cinema and the opportunity for narrative and character development of television…and it’s interactive. Even five years ago storytelling in video games didn’t even come close to emulating the quality of cinema or television but that barrier has been well and truly broken.

“There will be a merging of gaming and movies,” Andrei Severny of Tribeca writes. “First, through technologies emerging today – ﬂexible screens, motion controls, haptic – or tactile – technology, smart glasses, virtual and augmented reality. The merging of real and projected worlds will produce a seamless experience – a complete illusion of being part of a ﬁlm.”

As we’ve learned over the past six years, as poorly executed 3D has suffocated the mainstream film industry, a bad film is a bad film regardless of technology and a good film will be good without it. But technology is a tool, and a powerful one at that. Cinema is only just over one hundred years old. We’re only just beginning to fully comprehend the potential of the manipulation and sharing of images and sound. And the possibilities are endless.