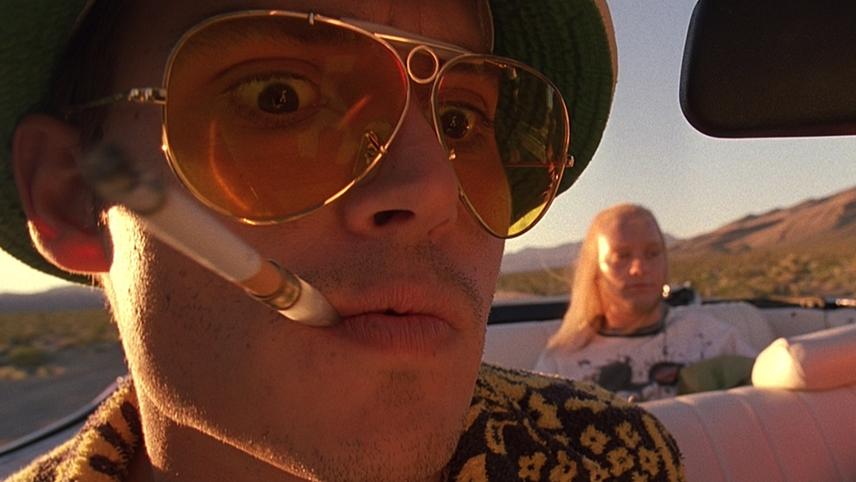 While there are a litany of choices for movies involving marijuana, Cheech And Chong make the list because they were pioneers in a genre which has seen hundreds of iterations. From Bill and Ted to Harold and Kumar, none of the doobie duos we know and love would have been possible without the iconic Tommy Chong and Cheech Marin. Up In Smoke dropped on Hollywood in the post-Vietnam era where hippies had become passé and punk was emerging as the dominant form of youth expression. The film is important because it defined dominant motifs – the unlikely duo, the journey, the incompetence and corruption of law enforcement, Southern California as a setting, girls and rock and roll – which films like Pineapple Express and Dude Where’s My Car? rehashed.

Terry Gilliam is renowned for his imaginative and often incoherent narratives but the drug-infused Fear And Loathing is Gilliam par excellence. The cult classic features Johnny Depp as the pioneer of Gonzo journalism, Hunter S. Thompson. Thompson is joined by his attorney (though partner in crime is probably more of an appropriate title) as they drive across the desert high on all manner of drugs. But it is mescaline, the drug synthesised from the peyote cactus, that leaves a lasting aesthetic mark on the film’s mise en scene. If you haven’t seen it, here’s just a taste:

While at first it seems overly theatrical, Human Traffic, directed by Justin Kerrigan, has become synonymous with ecstasy and cinema because it does it better than most other films on the subject matter. Sure, this is a fictional comedy with unnecessary romantic motifs, structured in a formulaic chronological plot, but it goes a long way towards capturing the zeitgeist of the era. This film makes it onto our list because it tries to emulate the effects of the party drug imaginatively as it encroaches on daily life. Scenes like this one make Human Traffic a classic.

Darren Aronofsky’s chilling and at times operatic masterpiece takes you deep into the realm of addiction and the gritty underworld addicts are privy to. The film lets you into the lives of three young heroin addicts as they move past experimentation to the extreme levity of the high to the dark side of drug abuse. But it’s the accumulatively rhythmic scenes, played out in tableaux form, which firmly plants Requiem For A Dream on this list.

This film is not only infused with a cocaine-induced pace but a samba rhythm. One of only a few Brazilian films not lost in translation, Fernando Meirelles’ City of God captures the heartbeat of Brazil’s most famous city, Rio de Janeiro. We get an inside look at the living conditions in the semi-lawless streets and alleys of the favelas, the ad hoc settlements (though some have existed for over 100 years) dotted throughout Rio. We see drug-induced feuds and unjust destruction in a film more about human nature than drugs but it still makes it on this list for its punchy editing and frenetic pace. If you don’t believe me, just check out the opening scene.

While many critics tore the film at the time of its release, claiming its themes and aesthetic motifs were borrowed from the aforementioned, Requiem, Spun stands alone as a vital piece of drug cinema. The film follows a number of tweakers, speedfreaks or meth-heads as they binge on the powerfully violent methamphetamine. But it’s the editing which earns Jonas Åkerlund’s directorial debut on this list. The film comprises over 5000 edits, a stylistic choice to mirror the effects of the drug and makes for nauseating yet entertaining viewing. For a look at just how creepy this film gets, watch the trailer:

This is one film you definitely won’t forget. Perhaps the most experimental – and that’s saying something – of this bunch, this English language film directed by Argentine Gaspar Noé follows Oscar (Nathaniel Brown) as he trips on the intense hallucinogenic N,N-Dimethyltryptamine (DMT) before being shot dead by police when sold out by his friend. The film, shot from the point of view of Oscar and then his soul, is an intense journey through the afterlife, a psychotropic tale of psychic atonement and resurrection. Definitely worth strapping in for. This is the DMT trip which happening in the early sequences of the film.

And of course, who could forget about that behemoth of a film to hit screens in late 2013. Martin Scorsese’s biopic features Leonardo DiCaprio at his spine-tingling best as the morally reprehensible Jordan Belfort. This hedonistic epic takes us on a journey through an entire spectrum of drugs, from alcohol to cocaine to the always entertaining methaqualone or Quaaludes as its referred to in the film. If you’ve been living under a rock for the past two years, here’s the scene which brought the synthetic barbiturate Quaaludes back into the mainstream in a big way.