Blake Curtis is a Melbourne-based filmmaker who’s most recent short film After The Storm (2012) was nominated for Victorian College of the Art’s ‘Mad Men’ award. His previous film, Newton’s Apple(2011), helped him get accepted into the VCA’s prestigious film course, where he now studies.

Have you always been interested in filmmaking? When did you decide to pursue it as a career?

I’m not sure when I became interested in filmmaking. I think it has always just been there. But not really in filmmaking form, it has always been more about storytelling for me. I used to play with LEGO a lot when I was younger and my parents thought that this meant that I’d become an engineer. But it wasn’t constructing the buildings that I was interested in I really I just loved creating stories for these little LEGO guys and inventing a world for them to live in.

What paths have you gone down to realise your career as a filmmaker?

Ummm… I don’t know, none yet. I haven’t got a film career to realise. But I’m attempting to prepare myself as best I can, by just absorbing as much knowledge as I possibly can. For me I really benefit from having a mentor, someone in the industry who isn’t going to hold back or sugar coat it. Filmmaking is such a personal process you need someone to call you on your bullshit and help you improve yourself at the craft you love, otherwise what’s the point. When I was at La Trobe I had Angie Black and at VCA I have Adrian Holmes, I think of them as my own personal Obi-Wan and Yoda, I just hope I turn out like Luke in Return of The Jedi. 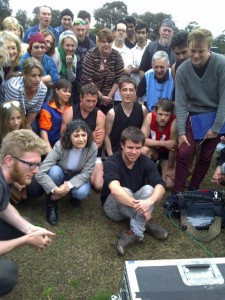 What have been the biggest hurdles?

The biggest hurdle is money, and unless something drastically changes it’s always going to be money. Filmmaking is a very expensive process and if you don’t want to compromise the vision then you better be ready to fork out the big dollars. I know people who have taken out a second mortgage on their house just so that they can give their film a chance. When you’re that heavily invested in your own work there is no room for error and it adds so much extra unwanted pressure on the film and the filmmaker to perform. Filmmakers shouldn’t have to make films like that, but they do.

What are some favourite films of yours? What films have been the biggest influence on your own style?

I don’t know if they were influences but more like obsessions, which I guess is pretty much the same thing. I was obsessed with Charlotte Web when I was really young, so much so that the VHS tape wore out. Then I was obsessed with the original Star Wars after my parents taped it for me off TV and paused out all the ads, which is the greatest gift anyone has ever gotten me. And then my best mate Daniel Dal Pos introduced me to the Back To The Future franchise and I became so obsessed with that, that my 21st was Back To The Future themed. Then I guess the obsession became more about the filmmakers then the films.

What element of the filmmaking process do you enjoy the most?

The production stage, I love it. There’s something really magical about being on set and seeing characters, settings and situations that you dreamed up become real in front of your eyes.

I reckon the best films are the ones that talk to you. It doesn’t happen often but sometimes I’ll sit down and watch a film and it’s like someone has just scooped my private thoughts, feelings and insecurities out of my head and put them up there on screen. I think that’s so cool, that someone else out there has felt just how I feel right now and been brave enough to make a movie about it. 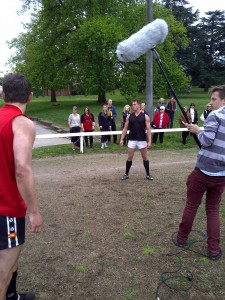 What are the biggest difficulties with bringing a film to life? Do you find it difficult to compromise your vision?

Myself. I reckon you can be your own worst enemy when you make films. Because it doesn’t look as good as it did in your mind or you don’t want to fork out the money that’s necessary to achieve the vision or the crippling fear that people aren’t going to get it. There are so many hurdles you can create for yourself that don’t need to be hurdles. I have two blokes living in my head, ones a realist and the other is an optimist and when I listen to one more then I listen to the other I trip over and make a less then average film and then the pessimist moves in for a couple of months, trashing the place. If you work in unity with the realist and the optimist and use them as tools to work through any given problem that arises then you won’t have to compromise your vision.

What are some failures that you’ve been able to learn from? How has this helped?

Well I was pretty gutted when I didn’t get accepted into VCA the first time round. I was arrogant and lazy. I thought I knew everything there was to know about filmmaking and that I didn’t really need to apply myself. So in the end it was the best thing for me not to get in because it brought me back down to earth and taught me that if I really wanted it to be a filmmaker then I had to grow up and work hard for it.

Well I’m going to get cracking on this next VCA short film, which hopefully goes alright, but after that… I’m not sure we’ll see what comes my way.