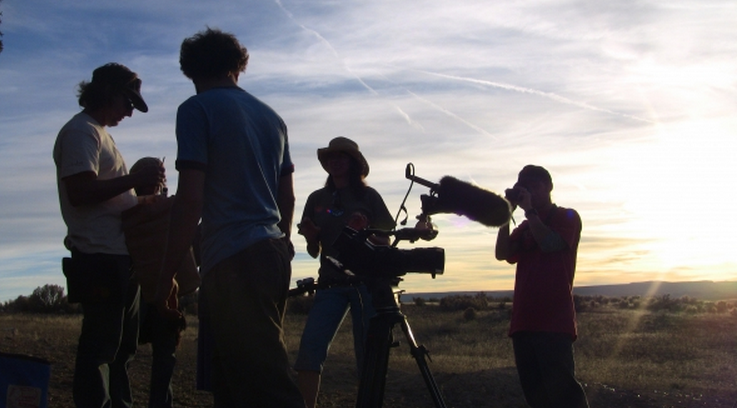 Local filmmaker Jacintho Muinos is currently looking for support for his latest project, Kane. We sat down with Muinos to talk about his love of film, his influences and his impressions of independent filmmaking. If you’re eager to support Muinos, and the local filmmaking community, head to the Pozible page for Kane here.

I’ve loved cinema for as long as I can remember. Watching and talking about movies was big in my house and, even though we lived in a small town, we made regular trips to the cinemas in Wonthaggi and Morwell – those were the days! I was always writing stories, creating fake radio shows with my brother on my dad’s bed-head cassette recorder, I’ve always loved telling stories and drama. I can’t pin-point a moment when I said “that’s my career!” (well, maybe when I enrolled at the VCA), but I always knew at some point I’d be making films. I still have ideas from my high school days that I’d love to make at some point.

There’s so many amazing filmmakers I love but if you’re making me chose, I would say I most adore the Coen brother’s films. I also really admire Michael Heneke for his approach. I don’t know if I would compare my ‘style’ to theirs, but if you absorb enough of something it’s likely to rub off on you, I suppose. Tragedies and stories about regular people are what interest me, so I guess I instinctively make those kind of stories. I’m not the least bit musical, but I love music and find it quite influential. You can find so many rich stories in song.

Getting the chance to create and tell stories is so great. Also, filmmaking is such a collaborative process that there are so many unexpected influences on the film, so you’re always getting a nice little surprise.

The film itself is such a colossal hurdle that you have to truly want to make it to not view any element as a hurdle, more just a part of what you’re doing. The biggest resource is people, so finding the right people to work with is the biggest challenge. The right people, gear and locations often come with a price tag, so money is a close second.

It’s obviously more than one thing, but story and performance strike me as being pretty important. I don’t really like being spoon-fed outcomes, so I tend to gravitate toward films that are more open to interpretation, that give me something to contemplate or discuss in retrospect.

I think if you can make a really good short film it can help bring you closer to making a feature film. Many great filmmakers started with making shorts, so I’m going to say ‘yes’ but they’re obviously very different formats. I imagine the ‘business’ side of things being more prevalent in the feature world, so that’s a whole other kettle of fish.

I’m a bit of a dinosaur when it comes to social media and I fear it’s moving faster than I can keep up and by the time I’m 40 I’ll be 80 in tech-years, asking questions like “how do you turn on the instagrams?”. Yes, I think social media is changing the way we do everything, including filmmaking. I’ve used it in some way on every film I’ve made.

This year before Kane, we made another short titled Cake, so that’s something to keep an eye out for. I’m currently developing a couple feature length ideas as well as a TV satirical comedy, so hopefully these films are seen by the right people and I can cram my foot into a doorway to share those ideas with people that get excited to help bring them to life!

Just make stuff. I helped on a film recently where a small group of friends got together to shoot a film in 1 day as an ode to her dying car and it’s going to be great! There are no excuses for why we can’t get out there and make films if that’s what we really want to do. It’s the best way to learn, hone your craft and, who knows, you might just make something really great.