Rohan Spong is an Australian independent director notable for his minimalistic approach to documentary filmmaking. He operates almost entirely on his own; producing, directing, shooting and editing all his own work. Whilst living in Los Angeles, Spong made his first feature-length documentary T is For Teacher (2009), which received acclaim at a number of prestigious film festivals. His recently released All The Way Through Evening (2011) focuses on New York-based pianist Mimi Stern-Wolfe and the concerts she organises in memory of those lost to the devastating AIDS virus. At the NYC Downtown Film Festival All The Way Through Evening won the Jury Prize. We talked to Spong about his new film and his experiences as an independent docomentary filmmaker.

What films have been the most inspiring or influential to you and why?

I’ve only recently been asked this question actually – it’s funny that I’ve managed to go so long without answering it. I still vividly remember wagging school to go and see Spike Lee’s Summer of Sam. I think I remember I had just turned 18 and was at the Cinema Nova watching a daytime session and had to be out with enough time to travel back to Zone 3 for roll call. I used to do that a lot. The film had a profound affect on me because it was so realistic. You really were caught up in a very specific neighbourhood of people in Brooklyn, it was the height of summer, there were racial conflicts, disco was being usurped by punk music, and there was this hysteria over a serial killer on the loose. It just felt like an undeniably three dimensional universe. It was immersive in the way that good cinema can be.

Is it harder to get started or to keep going?

I think there are pros and cons with both states. When you start out you have some really wild outlandish ideas, many of them not so great, and you are fearless about rolling up your sleeves and picking up a camera. And the results are often mixed and that’s ok because you are learning about the craft. A few major films later and I feel like there is a greater responsibility or pressure to make quality work, that every idea has to be a pearl, and that I yearn for everything to be executed perfectly. And that’s debillitating, because nothing is ever going to be perfect. Nothing will ever match what is in the mind’s eye. When you start, you don’t really have mind’s eye or fear. The experience you gain along the way, you trade in for the fearlessness.

It’s often really hard to reconcile the difference between what we desired and what we achieved. How have you encountered this and how do you move through it?

I wish the concert sequences in All The Way Through Evening were even more dramatic. I guess I’d desired a lot more sillouettes and really high contrast shafts of light. It was never going to be that way because the space that Mimi was performing in was painted in light colours and every light that was turned on reflected around the space. I really just had to let my vision go and try to find beautiful and expressive shots out of the environment I was in. I’m ok with the concert sequences in the film, but they aren’t how I envisaged. 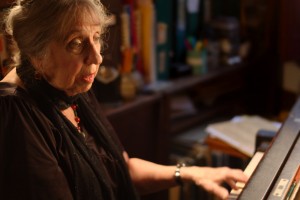 Do you preplan all of your shots? In All The Way Through Evening (2012) I was especially impressed with the way you shot the Benson Concert. How do you plan coverage of this type of event?

A lot of it is fairly on the fly and decided on the day. I decided I wanted to start the final song (Walt Whitman in 1989) with shots that were quite wide, and from angles that implied the audiences perspective and to end the concert sequence on Mimi’s face and hands, which would mean moving around the 180 degree rule, or, depending on your film school, “crossing the line”. So aside from moving from wides to close-ups, I knew that I had to move behind Gilles and take a reverse. I didn’t have so much as a shotlist as a strategy. It’s funny because I think that reverse shot is so-so and was a bit unhappy about the fact that I needed to use it when I was editing the film, but at the first screening of the film, a woman audibly gasped at it. I think that as a practitioner you can get so wound up about making lyrical or expressive images that you forget that you are making work for an audience for people who aren’t practitioners. And that one person’s “so-so” can be another’s “profoundly moving”.

Your approach to documentary filmmaking seems fairly minimalistic in the sense that you direct, shoot and edit the films yourself. What are the benefits of this? What are the drawbacks?

I like flying solo but the drawback is that my kit of gear has to be small and light enough to carry. It pretty much precludes using any lights.

I think the biggest skill required to make any film, narrative or documentary is be conscious of structure. Where are the pieces going to go? How will they look and feel alongside each other? I watch a lot of documentaries that are so poorly structured. Often the scenes are well edited but the order that they are presented in isn’t particularly engaging or lyrical. 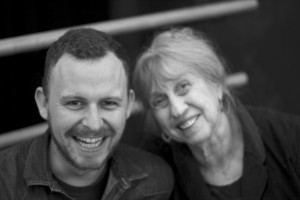 There is a strong sense of optimism in your films despite their difficult subject matters. What makes a film great for you? Are there certain qualities that make a film better for you?

My films are all optimistic. Life can be hard and lonely and people have a tendency to be cruel or lacking in empathy. And my films are all told about people that exist in this very real cold world. But they’re all people who are striving for something more. For themselves and for those around them. They have strength of character even when the odds are stacked so unfairly against them.

The central figure in your most recent film All The Way Through Evening (2012) Mimi Stern-Wolfe is a remarkable character. How did you first meet her? In the past how have you decided on the subjects of your films?

I really wanted to make a film about Mimi because she fascinated me. I was just immediately drawn to her. But in saying that, she became a lot of things in my life very quickly. A friend. A grandmother. A peer. A rabble rouser. Someone who taught me a little about classical music. Someone who I taught a little about photography and computers. Someone to sip tea and watch a movie with or sit in a restaurent and have a cocktail with. It’s a far more organic relationship that me simply directing a film and her passively standing at the centre of it. We were hanging out when the camera wasn’t rolling and we still hang out a lot now when I’m in New York. Even though you don’t see me in the film, I hope that the audience comes to sense the depth of that relationship. There’s a lot of mutual admiration and respect we have for one another, but there’s also a lot of fun going on too. There are lots of moments in the film that make me smile because I can see this mischievous twinkle in her eye as she looks off camera at me and I know I was reflecting that same twinkle back to her. My relationship with her is easily the most profound relationship I’ve had in my life to date. I know we will continue to collaborate together in some form. Probably not on everything, but I do believe that our lives have always been destined to intersect in the way they have these last few years. 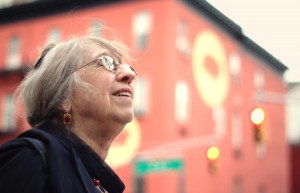 You seem to get quite close with the people you interview and speak of very personal experiences. How do you develop such a close connection with people you haven’t met previously?

People ask me that a lot and I don’t have an answer for it. When I am shooting a film I make myself vulnerable. I show up alone carrying my own kit of heavy gear. I’ve often travelled on Greyhound buses or long trains or small biplanes or invariably some kind of unsophisticated transport. Perhaps people respond to that a little bit. I’m also very honest about what form I think the film will take. I guess if you have an idea of what it is you’re trying to express people that you can express to people in a way that seems tangible, it facilltates trust.

From T is For Teacher (2009) to All The Way Through Evening (2012), all of your films explore socially significant issues. Do filmmakers have any responsibility to culture? Do you feel that being a creative person requires that you give back or tell a particular story? Why or why not?

I don’t think creative people have responsibilities to anyone but themselves or their audiences.

Pick up a camera and shoot.

All The Way Through Evening is Rohan Spong’s latest film and is opening in selected theatres this Thursday. You can read ReelGood’s review of the film here. For more information regarding the film, go to http://www.allthewaythroughevening.com.