Ben Mcnamara is a local award-winning filmmaker, actor and writer. One of his most recent films, Electric Dreams was selected to be shown at Cannes Film Festival in 2013. We talked to Ben about his work, his journey to where he is now and his successes.

When did you realise that you wanted to pursue a career in filmmaking and how did you make the decision?

In my third year of studying graphic design I started making stop start animations. They went really well…I won a design award and got flown to south Africa, and then when I flew back another animation was picked up by MTV Europe and I also won a General Pants film competition. The animations were horribly crude but my storytelling was pretty good and so I decided to give tropfest a crack using one of my stories. It was pretty bad but a great experience (I even kissed the lead actress…what a playa).

But that set me off on my film making adventure. I racked up a massive debt by studying my Masters degree in film, and haven’t stopped since. I love making and creating stuff, and I’ve been doing that since I was little, so I’ve never made the hard decision that it’s what I wanted to do….I just do it. 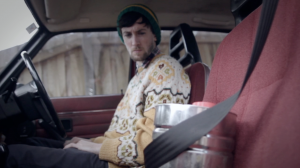 You say started out in graphic design. Has your work in that area influenced your work as a filmmaker?

I’m not the most aesthetically amazing designer. I had heaps of people around me who killed that shit. I like to think (and maybe im delusional) that my strength was in the concept….and my designs were often simple because of that. That is something I try to constantly bring to my work….the IDEA is what people like. The right IDEA shot on a Canon 550d will smash the wrong idea shot on a RED EPIC any day. Production value is just dressing up an idea. Having the most gorgeous dress with diamond ear-rings isn’t going  to make the 65 year old German cleaner who hasn’t seen his willy in 30 years look like a girl.

I think having the right combination of creative intelligence and logistical understanding. It’s about trying to think outside the box, but thinking inside another larger, more creative box. We all have limits, and unfortunately as young film-makers with zero dollar budgets we pretend like we don’t and end up making bad decisions. Having the ability to step back and go….yes this is a rad idea…and I can actually pull it off in a manner which gives the idea respect…is really fucking hard to come by. That….and not being a wank.

What are films that inspire you? Are there any particular filmmakers that have been an influence?

Jean Pierre Juneau is probably my favourite director ever. Amelie (2001) is a masterpiece and his earlier films are really inspiring. From a writing perspective Juneau is who I most admire, he just owns the creative quirky character like a trucker on a meat pie. From an acting perspective Chaplin/ Sellers/ Tati are who I studied and are effortless in their manipulation of the audience. In regards to the films I actually make though, Ricky Gervais. Ricky Gervais Mockumentary…not his films….I’d prefer to watch Big Brother than his films. My style is very much a case of strangely real characters who are in a unique environment or situation and we watch them respond. They are often sad and pathetic, and I seem to be able to write that well. 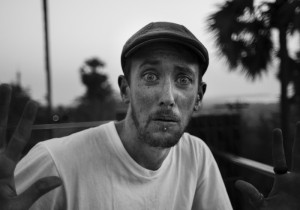 What failures (of your own) have you been able to learn from? How did they change you and your process?

My first ‘proper’ film I directed was the best and worst learning experience of my life. I went big and didn’t have the experience or foresight to back it up and it ended up scarring me. The script was great and had a lot of buzz but purely due to my lack of experience in producing and directing I didn’t do either properly….and it just turned into a ball of mess. My problem was I was trying to fulfil what I thought I should have been doing instead of trusting my instincts. It shot my confidence….with a 12 guage. Things just got out of hand but instead of reeling it back in I sorta just let it go because I didn’t want to look like I didn’t know what I was doing. Pride’s a fucked up thing and by the end of the shoot it had taken on a life of its own…not in a good way. I was editing it myself but the negative associations with the film was un-bearable and I didn’t do the cut justice….I have no idea whether there’s a good film in it or not. I’m a pretty sensitive dude and feeling like I had let everyone involved down really heavily played on me. I didn’t touch film for ages. And then I just decided to learn from it and made films in the almost exact opposite manner. Simple ideas. Simple crew. Small logistics. It gave me confidence, got me back in the game and also taught me where my real skill sets were. I’ve had a few failed projects since but you learn they are just part of the game and I have the skill and confidence now to know when the fruit is going off.

You do a lot of your work with Matt Cleaves. Obviously filmmaking is a very collaborative process, but what are the benefits of having such close collaboration with somebody?

Collaboration in film is so important. If you can get a crew together who can more or less look after every department then you are invincible. Luckily between Matt and I we were able to cover almost everything. I would write, act, edit and grade (my photoshop skills come in handy) and matt would write, shoot, edit and record sound. We were pretty restricted logistically…but restrictions are where you have to be really clever and creative. Matt and I are almost opposite people which helps collab wise as well. I’m the person who visualises everything and has the story and edit in my head whilst being really particular about capturing certain beats because ‘…just trust me….we NEED this shot’. Whilst Matt is super logistical and can sometimes be mistaken for a robot. Seriously, the dudes workflow is unbelievably methodical. So when you combine me, a guy who lives in his imagination and has a thousand work folders within other workfolders labelled ‘final.v18’ who also has a horrible time articulating his thoughts WITH a dude who has no fear taking on any shoot because he has already thought of every potential problem and has backed up the audio seven times before the take is over….things work out pretty well. Luckily we both have a pretty good sense of humour. I wanna give a big shout out to Kathleen Lee here who we’ve been collaborating with on the past few films. Kathleen is like Matt and I combined minus my messy workflow and Matt’s robotic nature….plus she has boobs so she is instantly an improvement on both of us. 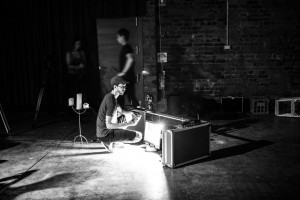 Are you on social media? What role do you think social media plays in today’s film industry?

I am. But badly. I look at facebook, we used to run a youtube channel and I try to get online cred as much as possible…but I struggle with the concept of talking about myself like people actually care (teen angst anyone?). In the midst of cat photos and tofu breakfasts its increasingly difficult to make people feel stimulated. But I’m doing my best to overcome my social awkwardness and really actively trying to get out and spread the network. Social media is incredibly powerful if you can harness it….it’s just trying to find your audience which is key.

Your last film Electric Dreams was chosen to be screened at Cannes. Do you approach your work differently since this success? Has the exposure provided opportunities you didn’t have previously?

Electric Dreams is playing at Cannes 2013 so not too sure what it is going to do for us just yet but being able to say that is still really really cool. Nothing has changed for us yet except it made my friends treat me really well for a weekend…I even got a few free brews which was nice.

Personally I get freaked out if I sit still. So that’s already in the past for me and I want to be taking the next step. Throughout my career I have won quite a few awards (and lost many) but as soon as I win won, I almost instantly get nervous that this is where it will stop…..and so I keep going until I’ve improved on it. I’m anxious now because I don’t have any films locked in for the next few months.

What are the plans for your future?

Collaborations. The next year I just want to work with as many cool people as possible and get involved. I want to focus on acting as that’s my passion these days, so as long as I am constantly taking a step forward I’ll be happy. I’ll always be designing and travelling as they are my two other loves in life.

Find a way to make money which doesn’t require a lot of time so you can make fun stuff. Grow a thick skin. Open your ears and eyes. Make heaps of films and don’t slow down. Wear deodorant on set and brush your teeth and have underwear which fits as seeing ass crack is gross. Don’t make excuses as to why you can’t make a film. Don’t be a cunt. Identify your skill-set, and show it a lot of respect as you’re probably not very good at it yet even if you think you are.