Hankering for some Hankering. 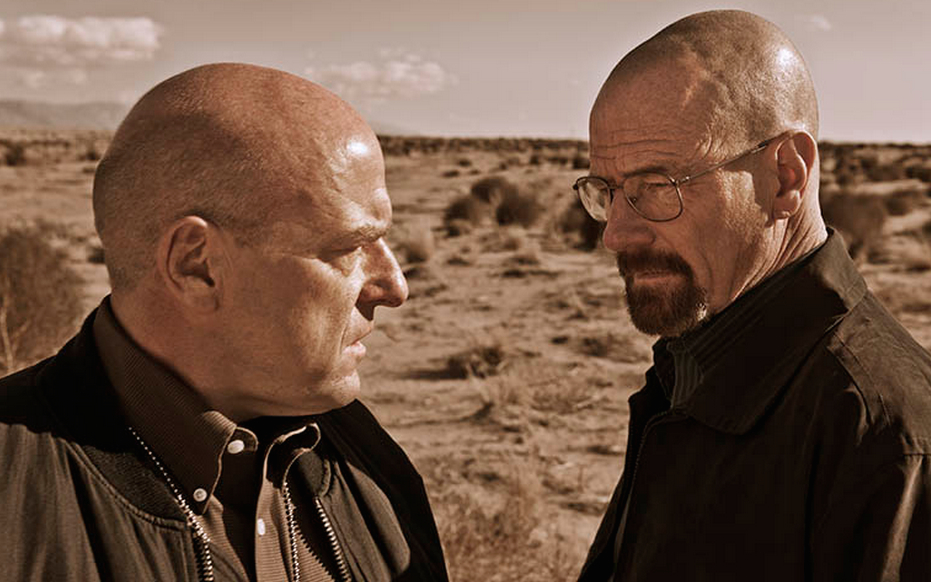 In the wake of Breaking Bad cleaning up (yet again) at this year’s Emmys, it’s time to take a look at some of Hank’s greatest moments, and celebrate his role in the series. Having portrayed many characters in law enforcement, for example ‘Under the Dome’ and a small role in ‘Little Miss Sunshine’, Dean Norris becomes the definitive law enforcer as Walt’s DEA brother-in-law, Agent Hank Schrader. WARNING: SPOILERS AHEAD!

Season 2, Episode 5: Hank in the elevator

Here, we witness Hank in a rare moment of vulnerability. After maintaining his usual façade of bravado and confidence, Hank has his first of many panic attacks throughout the series. After learning of his imminent promotion that will mean splitting his time between Albuquerque and El Paso, Hank is clutching at the walls and struggling to find his breath as he rides the elevator downstairs to lunch. We are so used to seeing Hank as an impenetrable wall of confidence both in the workplace and at home, that this scene reveals another layer to Hank that we continue to see glimpses of as the series unfolds.

Hank knows Walt is Heisenberg. Walt knows that Hank knows he’s Heisenberg. The bulk of Hank’s time and resources have been spent trying to uncover who Heisenberg is, which cultivates in this scene. Walt and Hank face-off in his garage, resulting in Walt having a black eye, and Hank seething, becoming hell-bent on bringing him down. Everything Hank and Walt have been through has now been disregarded. Learning of Walt’s cancer returning does nothing to appease Hank’s anger, who instead replies, “good”, and the episode ends with Walt leaving Hank with a warning: “tread lightly.”

Season 3, Episode 7: Hank, the brothers, and a parking lot

When the Salamanca twins arrive in Albuquerque looking to eliminate Walt for his involvement in the death of their cousin Tuco, Gus learns of their intentions and out of fear of losing Walt and therefore millions of dollars, he gives the brothers the go ahead to kill Hank. After eluding their attempts to kill him, Hank finds himself on the ground, wounded by a gunshot to the stomach, scrambling to load one more bullet into his gun before being bludgeoned to death with an axe-wielding Salamanca. Hank shoots him dead, leaving the other brother without the use of his legs. Yet again, Hank proves adept at eliminating his opponent in a shoot-out (see below).

Tuco has kidnapped Walt and Jesse, taken them to a remote location, and plans to keep them there until arrangements come together to take them across the border into Mexico to cook meth. Not only is this where we meet one of the most important characters in the series, namely the wheelchair-bound Tio Salamanca, but this is where Hank kills Tuco after a lengthy desert shoot-out. His skill and fearlessness brings an end to Tuco’s threatening and deadly presence, not only for Walt and Jesse, but for the meth business.

In arguably the best episode of Breaking Bad, directed by Rian Johnson, Hank meets his demise at the hands of Uncle Jack. After driving out to the desert to arrest Walt, Hank, Gomez and Jesse are confronted by Todd’s Nazi Uncle and his associates. Walt pleads to Jack to let Hank go, but to no avail. He is forced to watch on as Jack shoots Hank at pointblank range. In true Hank style, he doesn’t die without spitting one last insult at his killer. “My name is A.S.A.C. Schrader, and you can go f*** yourself.”

Season 5, Episode 8: Hank on the toilet

Hank has been restlessly trying to uncover the identity of meth king Heisenberg. Who would have thought that his moment of clarity would be whilst sitting on the toilet? Hank and his wife Marie are having dinner at the White household. The episode’s director Michelle MacLaren deliberately gives the viewer a sense of calm and contentedness as the couples talk about everyday things, including shampoo. When Hank takes a trip to the toilet, he begins flicking through a copy of Walt Whitman’s Leaves of Grass, a book of poems given to Walt by Gale (his assistant in the super lab). Hank’s moment of realisation that Walt is Heisenberg is so brilliantly executed, and this information irrevocably alters Hank’s relationship with Walt.