When I reflect on my younger years (that is, once I get past the initial annoyance of not having grown much taller) I think about the things that are still with me. Family, friends and places are nearly gone.

Some friendships remain, some still great, some grown stale and some I”m glad are long gone. Sadly, my first generation Optimus Prime Action Figure and Tintin Comics were washed away with flood waters, and my brother and I no longer fight with lightsabers (curtain rods) in the back yard. But my old novels, movies and television shows are still there.

I suffer from many ‘isms and ‘asms and always turn to other worlds for comfort and company. The townsfolk of Dibley will always be there when I’m down and The Doctor is always floating about somewhere on fantastical, mind boggling adventures.

M*A*S*H stands above it all though. It has grown with me, changed me, and helped shape the moral code I follow today. No matter how many times I watch it, I always get something new from it. It serves as a moral compass, in which any of my life questions can be answered.

Forty-two years have passed since M*A*S*H first aired, and I dare say it hasn’t left the small screen in all that time. It broadcast for eleven years and has been on Syndication across the world ever since. I first discovered it when I was twelve, and it was playing on Channel 7 at five pm weekdays. It was on just before The Wheel of Fortune and the Six o’clock news.

It was one of television’s most defining shows and changed the sitcom landscape for years to come. It wasn’t just a drama or comedy. It was the first show to seamlessly take you on a roller coaster where one minute you could be laughing and the next crying.

Let’s face it, eleven years is a bloody long time, and for an actor it’s a huge commitment. Only four cast members stayed with the show from its first season until the end – Alan Alda (Hawkeye), Jamie Farr (Klinger), William Christopher (Father Mulcahy) and Loretta Swit (Margaret). Incidentally, Alan Alda is the only actor to appear in all 251 episodes of the series.

M*A*S*H was the first program to nail the departure, arrival and integration of characters. In fact it handled the cast transitions so well it felt only natural. These cast changes helped the show remain fresh and current. They also reflect the true nature of friendship in a way. People enter our lives, we have fun together, go through hell together, then depart. My mum used to say that I’d be lucky to have five friends stay with me through my epic journey and trundle through the jungle known as life. M*A*S*H helped me prepare for that.

Part of me is envious of those who got to watch M*A*S*H when it first aired. They got to grow and change with the show in real time, and the show certainly changed over the years. Beginning as a screwball situational comedy, it gradually morphed into a dramatic character piece.

We saw boys change into men, men lose their grip on reality, and people find themselves, all against the backdrop of the horror of war. Season Three is seen as the first big change, with the departure of Wayne Rodgers (Trapper) and McLean Stevenson (Henry).

Henry’s departure is truly magical and heartbreaking. I will never forget that moment when Radar wanders into the Operating Room without a mask and tells everyone that Henry’s plane was shot down.

The Fourth Season saw the arrival of Mike Farrell (B.J.) and Harry Morgan (Potter), and the first steps towards the show’s transition to a dramatic format. The laugh track was used less, and the show started to explore darker and more character-centered themes.

Season Five saw the departure of Larry Linville (Frank Burns) and Season Six saw the arrival of David Ogden Stiers (Winchester).  Season Eight saw the departure of the much loved Garry Burghoff (RADAR). He was only one of four actors to carry over from Robert Altman’s M*A*S*H movie. 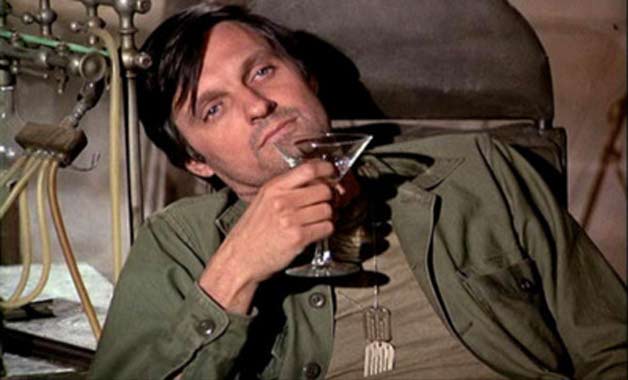 SOMETIMES YOU HEAR THE BULLET

M*A*S*H is a workplace situational comedy and the first season rarely strayed from the conventions of this genre. However, one episode changed that and triggered the maturing of the show into a beast of its own.

Sometimes You Hear the Bullet was the seventeenth episode of the first season, and proved to the cast, audience, and producers that they had something special on their hands. The episode starts as a comedy, becomes a tear-jerking drama, then seamlessly finishes on a brighter, more hopeful note.

In the episode, Hawkeye’s childhood friend drops into camp, writing a book about the war and the young soldiers fighting in it. His friend is later injured and Hawkeye finds himself operating on him. Unable to save him, Hawkeye shuts down for the first time. It hits close to home.

Henry, I know why I’m crying now. Tommy was my friend, and I watched him die, and I’m crying. I’ve watched guys die almost every day. Why didn’t I ever cry for them?

Because you’re a doctor.

The hell does that mean? 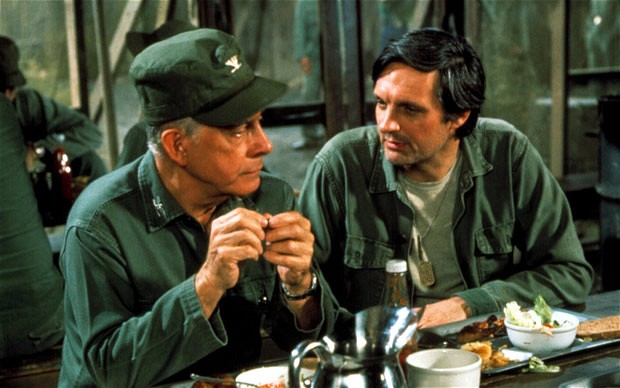 Certain privileges come with being a long-running television show. One of them is that you can get away with being a little slack and reusing old material. Take Supernatural, Stargate SG1 or Smallville are more recent example of this. Another privilege, however, is that they get a license to try new things and bend the rules a bit.

M*A*S*H relished this opportunity and the results were largely successful. In Season Seven they did an episode from the point of view of a patient. Point of View offers a completely different view of the characters. In Season Nine they took an even bigger risk and did an episode delving into the characters’ absurd dreams. ‘Dreams’ is not the show’s finest outing, but I still tip my hat to them for giving it a shot.

You’ve got to remember that all this stuff is happening in the 1970s and early 80s, long before The Sopranos, Buffy the Vampire Slayer and Breaking Bad. M*A*S*H‘s experiments were brave and bold for the time.

While 24 is famous for its real time escapades, M*A*S*H actually got there first. Life Time was an episode written and directed by Alan Alda. Accompanied by a ticking clock on the screen, this episode saw the surgeons race against time to save a patient. The result of this experiment? A truly riveting twenty-two minutes of television.

For the final episode of Season Four, show runner Larry Gelbart decided to try something unique and different. He wanted to do an improvised episode where the actors would be forced to delve deeper into their characters. He crafted a story where a war correspondent interviews  the 4077 staff. The result is pure brilliance and shows how in tune the actors were to their characters.

Episode eighteen of Season Four treated us to what is one of the best half-hours of television you’re likely to ever see. In Hawkeye, the titled hero is injured in a jeep crash and must prevent himself from succumbing to a concussion. Shacking up with a Korean family, he begins to talk endlessly to them. The result is a monologue and a testimony to the genius that is Alan Alda. 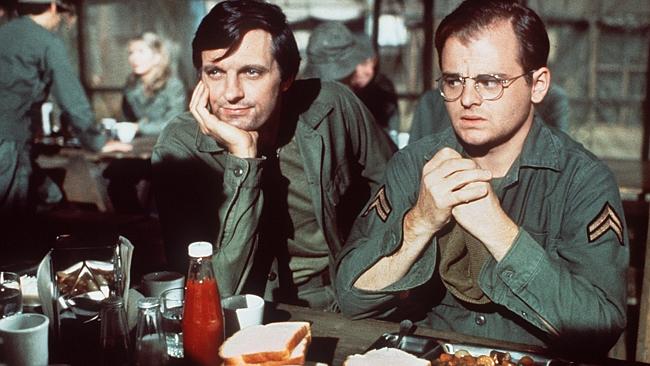 The finale was a four-episode, two and half hour long television movie, which, until 2010, remained the most watched American television broadcast in history. It was beaten by the Super Bowl.

Hawkeye, after eleven long years (seven more than the actual Korean war) finally loses it and is admitted to a mental ward. His journey to recovery is mirrored by the other characters. The war is ending and all of them are looking towards what happens next. Asking themselves if it will ever be the same. They all changed over the years, some for the better, some for the worse.

The most powerful transformation lies in Winchester. Throughout the series he had a love for music and used it as an escape from the horrors surrounding him. It was his anchor to the world he left behind. But after his Korean band is killed he can’t find solace in it anymore and questions whether he will ever be able to return to it.

The final moments where the characters farewell each other is pure magic and it feels like you are indeed farewelling friends you will never see again. In a touching moment B.J and Hawkeye salute Col. Potter. Reportedly, the final pages of the script are signed and framed in a museum somewhere so that you can read the final conversation between B.J. and Hawkeye.

The cast and crew farewell the audience in the closing moments of the episode with a simple message: ‘Goodbye’  written in stone. Never has a show’s finale been so touching to its world, characters and audience. 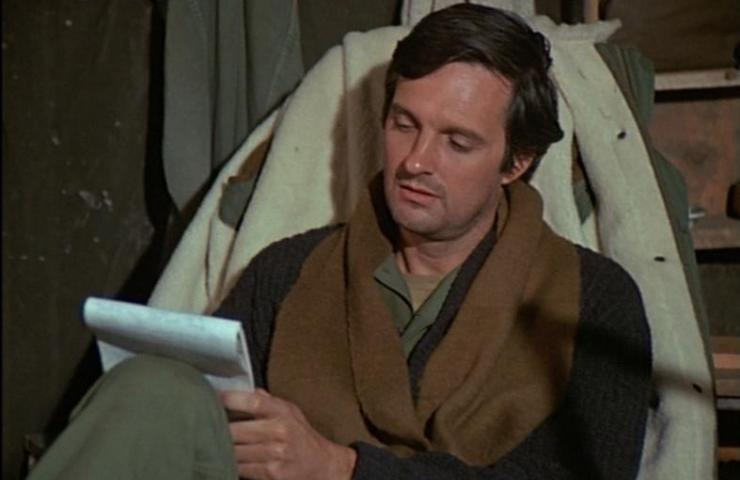 When I told a friend I was writing this article he told me that I should just post up a picture of Alan Alda and that alone would be enough. For eleven years, he was essentially the beating heart of the show and the voice of reason for anyone who watched it.

His interpretation of Hawkeye has come to represent freedom and rights movements around the world. He is the ‘Yanky Doodle Doctor’ and the guy you would want to be there to save your life.

Alan Alda contracted Polio (Poliomeylitis) when he was seven years old.  His parents combated the disease with the painful treatment developed by Australian nurse Sister Elizabeth Kenny.  He wrote nineteen episodes of M*A*S*H and directed thirty-two episodes. His influence over the show was so dramatic that the show can be split into two eras: Gelbart/Reynolds (1972-1979) and the Alda years (1979-1983).

M*A*S*H, which ran from 1972-1983, will forever remain one of the greatest and most iconic television shows. It will always remain a moral guide and best friend.