The sound of music. 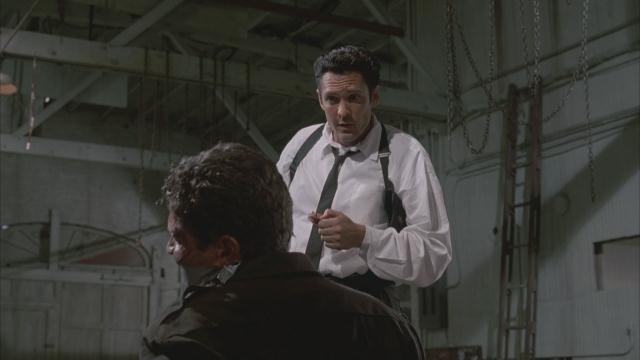 This scene from Tim Burton’s comedy horror, Beetlejuice sees the recently deceased couple, Adam and Barbara, using their ghost-abilities to try and scare the Deetz’, who have moved into the couple’s home. How else would they choose to go about this than to possess the family, and make them sing Harry Belafonte’s ‘Banana Boat (Day O’)? While it is questionable whether or not Adam and Barbara were putting their ghostliness to its best use, the hilarity of the sequence is not, as the Deetz’ and their guests dance and sing confusedly around the dinner table. The conclusion to the musical number is also brilliant, as rather than runaway in fear, the Deetz’ and their guests excitedly converse over what just happened, and hope for more of it.

Another reasonably absurd musical scene comes at the end of Monty Python’s The Life of Brian, where a large group of people sentenced to death by crucifixion, break out into song. They very optimistically sing, “always look on the bright side of life” as they hang on crosses, giving an appropriately ridiculous and almost uplifting conclusion to a film that is ridiculous throughout.

There are many great musical numbers in David Lynch’s films, including another in this very film, in which Dorothy sings ‘Blue Velvet’ in a club to an infatuated Jeffrey. But it is this scene, in which Dean Stockwell’s Ben lip-synchs Roy Orbison’s “In Dreams” that stands out the most. What makes this so chilling is not fully explainable, but its absurdity (something that seems to be common with musical numbers in non-musicals), combined with the completely serious mood of the violent psychopath Frank, as he watches and mouths the lyrics, build to instill a very unsettling feeling.

In the second instalment of Richard Linklater’s Before Trilogy, Jesse and Celine meet again in Paris, after spending one day together nine years ago. Jesse, who is touring his novel based on that day together, is now married with a son, and Celine works at an environmental organisation and has a boyfriend. After walking around Paris, discussing their lives, the pair goes to Celine’s place, where she plays a song to Jesse – about him. From Jesse’s book, it is clear that their time together years ago has taken up a decent part of his life, and here, Celine’s song works as a way to reveal the same thing about her. As she sings and he listens, it seems certain that there relationship is not quite over.

Using a recognisably light song to juxtapose with a very dark act is a popular method in movies. In A Clockwork Orange, Stanley Kubrick arguably started this idea, as he subverted the happy, feel good “Singing in the Rain”, by having Alex DeLarge sing and dance to the song while raiding a house and partaking in ultraviolence. In what would already be a horrific scene, having a character happily sing a happy song gives the sense that he is genuinely entertained by the violence, making it all the more unsettling.

Tarantino may have popularised the idea of juxtaposing song with action in his debut Reservoir Dogs, with a scene where Michael Madsen’s Mr Blonde dances and sings to Stealers Wheel’s “Stuck in the Middle” while torturing a policeman. Like what A Clockwork Orange did to “Singing in the Rain”, this scene makes it very difficult to associate “Stuck in the Middle” with anything other than an ear being violently cut off.

A rare break in tension comes in the form of an out of nowhere dance sequence in Alex Garland’s directorial debut. In Ex Machina, Caleb is invited to genius scientist Nathan’s isolated home to partake in a series of experiments with a newly created A.I. named Ava. In the moments leading up to this sequence, Caleb has begun to suspect Nathan’s actions and intentions regarding Ava. But when Caleb confronts him, a drunk Nathan shrugs the questioning off and breaks out into choreographed dance with his peculiar maid, Kyoto, under glowing red and pink light. What should feel out of place, in what is an otherwise tense and mysterious think piece, manages to feel completely in character for Nathan, who is played brilliantly by Oscar Isaac, and is played straight enough by the observing Caleb that it never strays too far into absurdity.

Shame tells the story of the sex addicted Brandon living in New York, whose life is somewhat shaken by an unannounced visit from his sister, Sissy. The relationship between the brother and sister, played by Michael Fassbender and Carey Mulligan respectively, always feels strained and with a potentially darker past than we’re ever shown. This among other things is felt strongly in a scene where sissy sings “New York, New York” in a small bar, as Brandon listens. Her rendition of the song beautifully emotive and slow – almost painfully so – making it feel extremely long, with cuts between the teary eyed pair are rare. While this very gloomy style of McQueen’s can be a struggle when drawn out for the duration of the film, in this particular scene it is fully effective.

In a black comedy about three teenage siblings who are kept in their house at all times by their over-protective parents, this musical number shouldn’t feel out of place. The three siblings give one of their routine performances for their parents, in which the brother plays the same guitar piece over and over whilst the two sisters dance in sync. This is already a wonderfully fun and crazy set piece, but it is when the music gets the better of the older sister that it truly becomes brilliant. This older sister (the only name given to her) has recently been exposed to several Hollywood films – something that is very much forbidden – and one of these is the dance film Flashdance. So naturally, she soon breaks out into dances from this film, as her parents watch on unimpressed, all while the brother continues to play the same guitar piece.

When Melora Walters’ Claudia sits in her apartment crying and singing along to Aimee Mann’s “Wise up”, it seems like a nice, sad and normal scene, but what follows sees it turn into a powerfully transcendent musical number. The film cuts from character to character, showing its large ensemble cast singing along to the same song wherever they happen to be. All of these characters find themselves in their subjective extremes of emotional turmoil at his point in the film, and what this break in reality allows for is a momentary release.