Tomorrow when the Rift began. 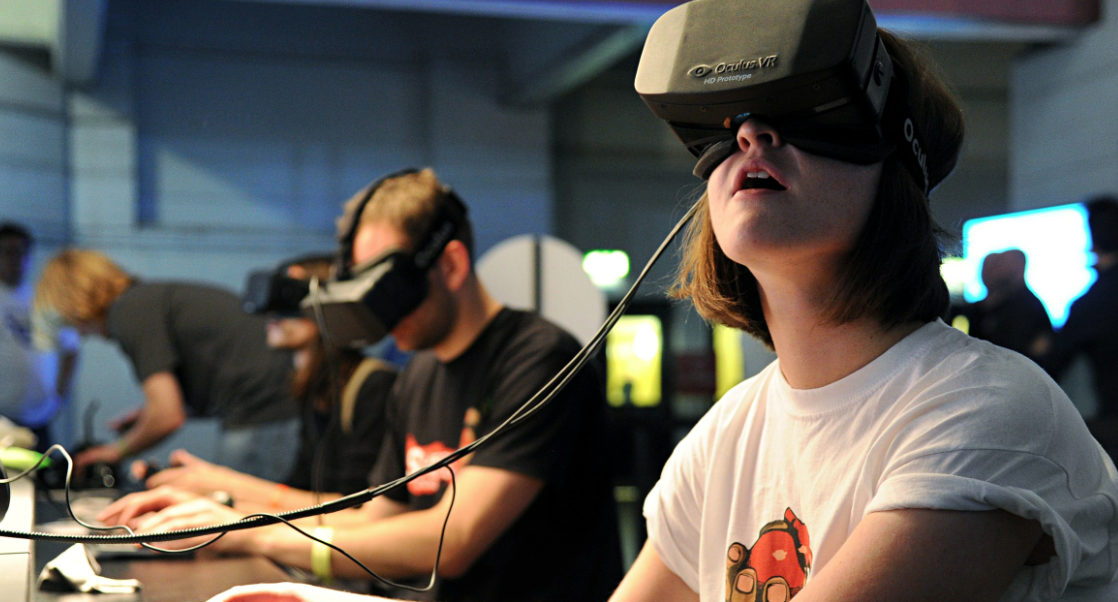 If you don’t know what the Oculus Rift is, well, you will soon. A consumer version will be available in the first quarter of 2016. A consumer version of what, you ask? It’s a giant piece of optical headgear that makes the Google Glass look like a monocle by comparison. If what we’ve heard is true, unlike the Google Glass, it won’t leave the wearer the least bit self-conscious about how ridiculous he or she looks. That’s because you don’t really care how you look when your mind is being blown.

The Oculus Rift should, quite simply, revolutionise the way movies, television shows and video games are made. It uses the most sophisticated virtual reality technology to date to immerse you in whatever world it sees fit to immerse you – limited only by what a screenwriter and a graphics designer can imagine. You’ve heard of surround sound. Well, this is not only surround sound, but surround images. When the trio from the Slate Culturefest podcast recently visited Facebook’s headquarters in Palo Alto, California, to demo it, having a T-Rex run right over the tops of their heads was possibly the least mind-blowing thing that happened to them. And it won’t even have to come down much in price, like other unimaginably luxurious pieces of entertainment hardware from our past, like the VCR or the iPod. The Oculus Rift is expected to be reasonably priced right out of the gate, somewhere in the neighbourhood of $350. 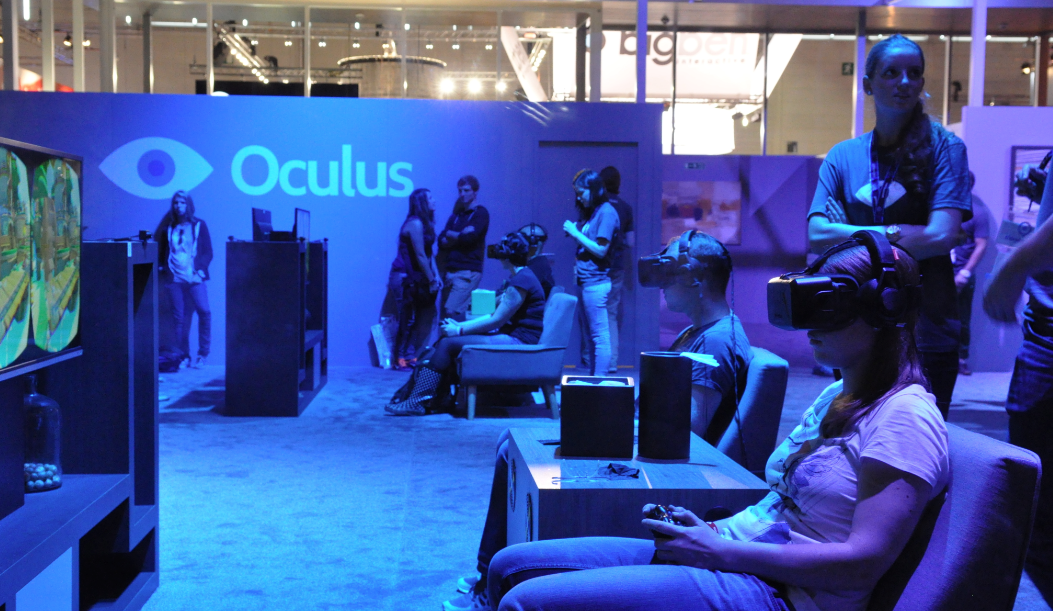 While I can’t wait to try one of these myself, I certainly can wait for it to become the dominant mode of how we consume entertainment, particularly movies. Simply put, I don’t want to be that dinosaur that ran over the heads of three amazed podcasters last month in Palo Alto. I don’t want to be the relic that’s left behind, pining for the past.

I’ve never been an early adopter, but it doesn’t mean that I don’t recognise when something is incredibly cool. And the Oculus Rift is undoubtedly that. But I don’t want it to become the only viable way to make entertainment. Because the moment that happens, not only will we all stop going to the cinema – a cherished tradition for any true cinephile – but we’ll also stop seeing the types of movies that cinephiles pride themselves on loving.

Can you imagine them investing the money necessary for a feature-length Oculus Rift movie about recovering drug addicts? About school teachers fighting racism? About farmers fighting drought? About depressed teenagers fighting their own self-loathing? Okay, those sound a bit like homework. But not every movie needs to be summer holidays. And every movie will be if we’re only watching them through the Oculus Rift.

As if to remind me exactly what’s at stake, I’m also listening to Karina Longworth’s podcast You Must Remember This, whose most recent season has been exploring the early years of MGM. A number of episodes deal with the transition from the silent era to sound, and its effect on great cinematic artists like Buster Keaton. Nearly overnight, cinemas didn’t want to show silents anymore because audiences simply didn’t want to pay for them with sound alternatives available. The dominant mode of making movies was utterly dismantled within a couple years, leaving all sorts of casualties in its wake.

Now, it doesn’t seem likely that the Oculus Rift will explode overnight, nor that the studios will or even can provide enough content to make the permanent shift to the Rift an imminent threat. But anyone who doesn’t think this spells the writing on the wall, eventually, for two-dimensional entertainment, or even three-dimensional entertainment as we now know it, is kidding themselves. 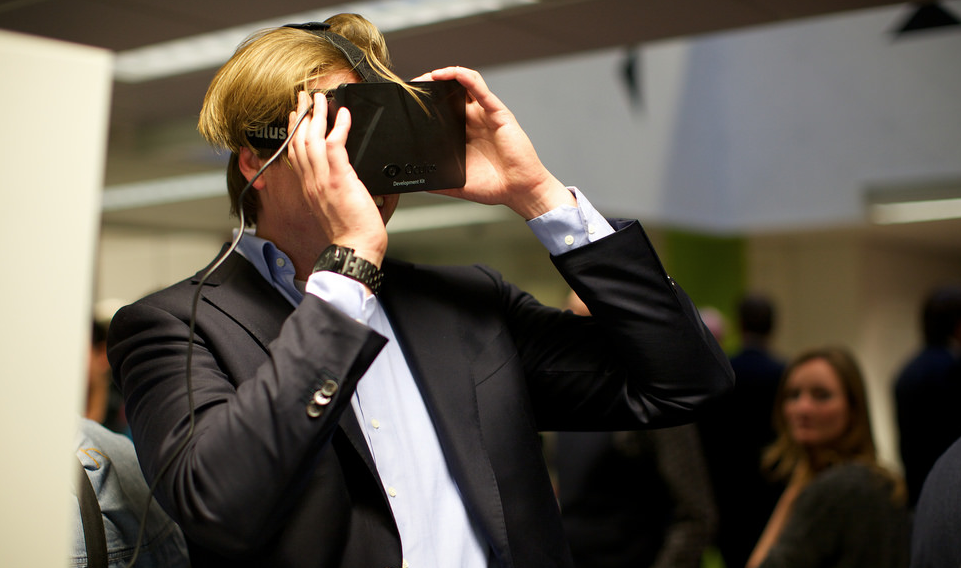 The creative environment we live in now may seem like a paradise compared to what’s in store. Even though more and more decisions are dictated purely by how much money a studio expects to earn back on its investment, that still, improbably, leaves room for the weird little upstarts to make their mark on cinema. For every Avengers: The Age of Ultron, there is, still out there, a Tangerine – Sean Baker’s movie about transgender prostitutes in Los Angeles, which is one of the best movies of 2015. Of course, Tangerine depends on no studio money, and it may still be viable with its intended audience even when “flatties” (to borrow a term used on the Slate podcast) become old hat. The most discriminating audiences are always the last to abandon any dying medium. Heck, some people still read poetry.

So this is all a bit alarmist, yeah? I mean, Australia just got Netflix, a platform whose popularity is exploding and one which shows exclusively “flatties.” All these technical advances we’ve been enjoying are not about to just get swept under the rug, are they? Maybe not. But don’t forget how quickly this industry changes. It was only a few years after sound came in that colour came in. One sea change does not preclude the near immediate advent of another. Perhaps a more salient comparison is physical media formats. Some people had only just started buying BluRays when they were told that physical media was going by the wayside altogether.

So to borrow once more from Slate – this time in the form of the recommendation they made at the end of that segment – show your kids any “flatties” that they haven’t yet seen, right now. It might not be long before the things we all love become relics, consigned to the dust bin of antiquity.