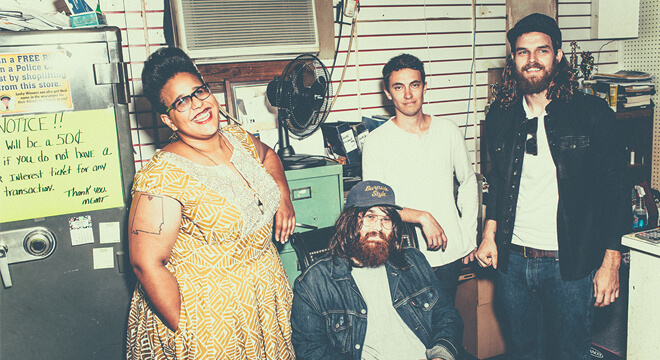 The continual and enthusiastic support of filmmakers is paramount here at ReelGood. Opportunities is an area of ReelGood in which we highlight opportunities for filmmakers to get out there, make their mark and showcase their skills. American rock band, Alabama Shakes, are currently gearing up for the music video for their new single and they’re offering an amazing opportunity for young filmmakers the world over.

Alabama Shakes are doing something very different with their new single, ‘Gimme All Your Love’ from their critically-acclaimed genre-bending album ‘Sound & Color’. They are challenging the idea of a typical music video and inviting ​filmmakers globally to create music films – short films that feature ‘Gimme All Your Love’ as the soundtrack.

Partnering with Genero, the brief will be a first for their 300,000 filmmakers around the world, with the selected music films being chosen by Alabama Shakes and sharing in USD $15,000. “This is a first for Genero, and an amazing opportunity for our community to showcase their creativity and push the boundaries of what a music video can be.” said Andrew Lane, Co-founder and CEO of Genero. Videos must be submitted to Genero by 8 October, 2015.

Alabama Shakes’ new album, Sound & Color, debuted at No. 1 on the Billboard 200 earlier this year. It contains the band’s new single, “Gimme All Your Love” and the no. 1 AAA radio hit, “Don’t Wanna Fight,” which was named “Song of the Year” at the 2015 FMQB Triple A Conference.

In a live review, The New York Times noted, “‘Gimme All Your Love’…swerved and whipsawed again and again, from the whole band pounding together, down to a spindly lone guitar, into a tender croon, working through a chugging Memphis beat and ratcheting up to Ms. Howard at full scream demanding, ‘Give me all you got, baby!’” “The likes of Over My Head and Be Mine are outstanding, licks-laden, emotion-soaked soul showstoppers,” said The Guardian in a four-star live review. “Alabama Shakes epitomize what a rock band should be in this era,” said SPIN, naming Sound & Color as one of the 50 Best Albums of 2015 So Far.

Alabama Shakes – comprising lead singer/guitarist Brittany Howard, guitarist Heath Fogg, bassist Zac Cockrell, drummer Steve Johnson, and touring keyboard players Ben Tanner and Paul Horton – made history when Sound & Color debuted at No. 1 on The Billboard 200, becoming the first female-fronted rock band to top the list without the benefit of having first charted a Top 40 single on the Billboard Hot 100. The album, which is the follow-up to Alabama Shakes’ Gold-certified 2012 debut, Boys & Girls, is available now at all music retailers, including iTunes and Amazon, and via the band’s website and the ATO Records webstore. Released by ATO Records in North America and Rough Trade in the U.K./Europe, the album was co-produced by the band and Blake Mills.

The GRAMMY®-nominated band, which recently played Lollapalooza and Squamish, will also perform at several other festivals, including Boston Calling and the Austin City Limits Music Festival. On October 2, Alabama Shakes will tape their third performance for PBS’ “Austin City Limits.”