It’s the line ‘the film was received positively by critics’ on Field of Dreams’ Wikipedia page that throws me right off. I watched this peculiar flick about a month ago for the first time expecting to be at least decently entertained considering how popular it’s always seemed to be. I’d like to set the record straight by saying that Field of Dreams is an absolute stinker. The basic plot? There’s some idiot farmer who’s bad at acting who talks to the ghost of Ray Liotta and is convinced to waste all his money building a baseball field so that ghosts can play on it. He also heads off on a road trip with Darth Vader and somehow it all ends with the farmer who can’t act hanging out with his dead dad. For some inexplicable reason Burt Lancaster decided to be in it too. Sound like something you might be interested in? I didn’t think so.

There’s a chance you might have to be totally obsessed with baseball to get the appeal of this one, but I feel as though if they made the equivalent film for Australian Rules Football (my preferred sport) I’d still think Field of Dreams was equally unwise. There is also no excuse for the terrible wife character in this film. Five minutes in I was hoping a whole herd of samurais would jump in and cut off her head.

One look at the freckles on his perpetually smug mug does it for me I’m afraid. Also, he says everything like he’s giving the Gettysburg Address. Also, there’s a scene in Seven (1995) where he laughs weird. I watched it on repeat for a couple of hours once. Also, Robin Hood: Prince of Thieves (1991). There are people out there who seriously think that film is acceptable (that’s two strikes in this one article, Kevin Costner). Also, ever seen a film with Freeman in it where he acted slightly different from any other film he’s been in? Yeah he was pretty cool as Lucius Fox, but he was about two rock hammers away from introducing Bruce Wayne to his old prison pal Andy Dufresne. Also, for every Shawshank there’s been a frightening amount of Bucket Lists.  Who am I kidding, it’s the way he talks. Hollywood needs to stop letting this man do voiceovers.

Baz Luhrmann suffers from a classic condition called Timburtonosis, in which he can’t help but make films that are visually ok (until you see more than two of them and realise they all look pretty similar) but that have absolutely zero substance. Love William Shakespeare’s Romeo and Juliet? I’d probably steer clear from Luhrmann’s adaptation Romeo + Juliet (1996). Fuck, the + should sell my case on this one right off the bat, but I’ll keep going. Lucky us, after butchering Shakespeare’s most famous play, Luhrmann made a joke of the country he grew up in with his bizarro Australia (2008) and after that still thought he had enough talent to give F. Scott Fitzgerald’s The Great Gatsby (2013) a crack. I’m fairly dubious as to whether Luhrmann’s style will really serve the essence of Fitzgerald’s novel. Not that Luhrmann cares. If there’s anybody who loves throwing shit at the wall to see if any will stick, it’s Bazza. 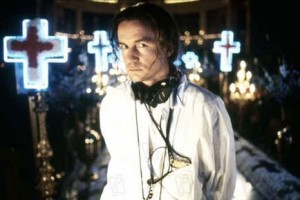