All friends have benefits. 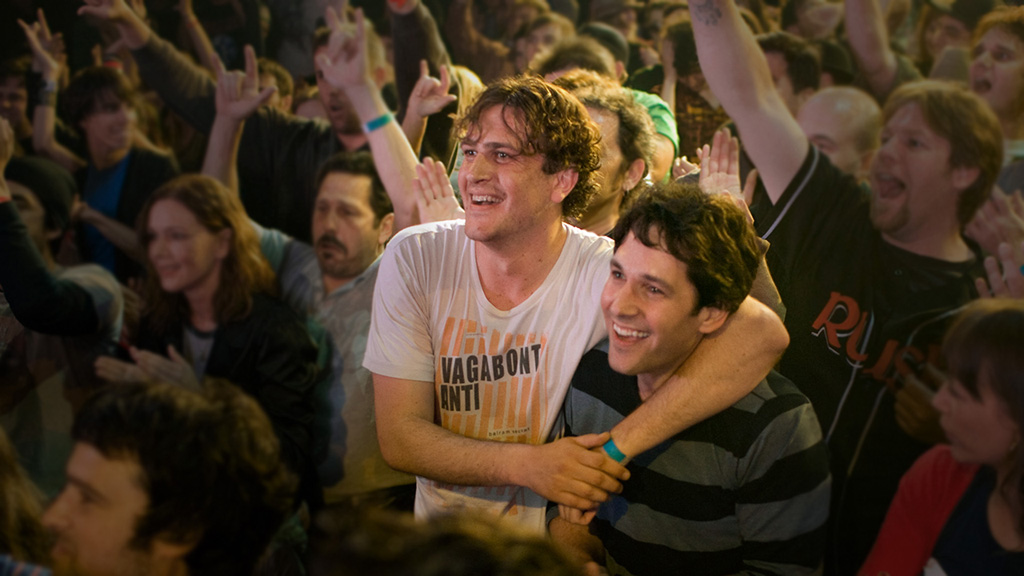 Some movie friendships look like so much fun you just want to join in. Or is that just us? Here are ten inspiring movie relationships that’ll make you want to be a better friend.

This movie explores bromance and the challenging terrain of friend-dating. Peter is a sweet guy, but his awkwardness puts everybody off except Sydney AKA ‘Jobin’. Peter enters Sydney’s man-cave and they bond over music, releasing primal urges and the movie Chocolat. Though the story revolves around a wedding, the real star is platonic love. This friendship is both fun and sweet. Nothing’s more bro-mantic than publically declaring your feelings for your best friend.

Annie and Lillian are old friends moving in different directions, wondering if they can hold on (yes, that’s a Wilson Phillips reference). But what doesn’t kill you makes you stronger. If a friendship can survive violent diarrhoea, a sedative-related mishap involving an Air Marshal and a tantrum over a giant cookie, then it can survive anything. Friends who shit in the street together, stay together. And if your bestie has your back on a little interpretive dance, she’s a keeper.

This is a cute inter-generational friendship between a weird kid with self-esteem issues and a slacker who manages a crappy water park. Duncan is in dire need of a good male role model. His mum’s dodgy boyfriend tells him he’s a 3. But Owen offers him just the right amount of tough love, teasing and non-patronising fatherly advice. Could Sam Rockwell be the coolest guy ever? He’s the kind of friend every weird kid with self-esteem issues could use.

Muriel loves ABBA and Rhonda has a mullet. They’re not exactly the coolest girls in town. In fact, Muriel is such a loser she gets dumped by the cool, mean girls for bringing their image down. But Rhonda has a different idea of what’s cool. She tells the mean girls to piss off and proves that you’re only a loser if you don’t have a loyal friend to lip sync 70’s Swedish pop with.

Without Doug to bind them, this is a pretty disparate group. But there’s nothing more bonding than going through some trauma. And this is hilarious, ruphie-induced trauma. This wolf pack – consisting of an uptight dentist, a selfish party guy and a total wildcard – become the three best friends that anyone could have as they piece together the memory of an epic night and find the missing (least interesting) member of their group.

The only way to survive a shitty job is to work with awesome people. And these chicks are pretty awesome. They’re tough, honest and can anyone ‘hun’ without it being weird. I love a strong woman and these sassy Southern gals can really tell it like it is. And they always have each other’s backs.

How did Marty and Doc become friends? What kind of parents let their teenager hang out with a middle-aged mad scientist?Whatever. I love these guys. They’re both kinda nuts. I always thought Marty was ultra cool when I was a kid but does he actually have any friends his age? Besides Jennifer. Note to self: if you only have two friends, make sure one’s a crazy old man because you could find yourself driving a DeLorean back in time.

Before they were Professor X and Magneto, Charles and Erik were just plain old mutant buddies. And they were way cool. It doesn’t hurt that these characters are portrayed by real life BFF’s Sir Ian McKellan and Sir Patrick Stewart, both knighted for being awesome (as is my understanding). They have amazing chemistry, as do the actors playing the young incarnations of them – UK hotties, James McAvoy and Michael Fassbender. They’ll make you wish you were a mutant, too.

What is more heart-warming than an unlikely animal friendship? This adventure of a scruffy ginger cat and a pug in the wild was on high rotation in my house when my brother and I were kids. We were just waiting for youtube to be invented. Now it’s animal friendship vids 24/7.

An uplifting movie and a rare find of a film friendship between a heterosexual man and woman. Or maybe I’m just bad at finding them. But this one’s a pearl. Dan and Gretta meet when both at a low point, but through a little musical inspiration and collaboration they mend their broken hearts. However, I don’t know if I’d recommend sharing your playlist in New York City with an attractive friend. It could lead to sexual tension and mess up that beautiful friendship. But here, it works.