Welcome to Recast This – the only thing ever in existence ever to retrospectively contemplate casting changes. The second Hobbit movie The Desolation of Smaug came out a couple of months ago and it was bad. To celebrate how bad it was, we thought we’d go ahead and recast Peter Jackson’s much better trilogy, The Lord of the Rings.

“You questin’ with me? ARE YOU QUESTIN’ WITH ME?? Then who the hell else are you questin’ with? There’s nobody else here.” Yes, cheap jokes are our bread and butter here at ReelGood, but in all honesty, if we could somehow secure DeNiro and Pesci for the coveted roles of Frodo and Sam (and we’re pretty sure we could) then we’d be crazy not to throw in some of the two acting legends’ more famous lines amidst Tolkien’s classic verses. Whenever Frodo puts on the ring, accidentally or otherwise, we could do a slow motion zoom on his face to Cream’s ‘Sunshine of Your Love.’ Of course, we’d also have to get the other half of the Wet Bandits, Daniel Stern, to play that hot Hobbit bar wench Rosie Cotton. That would mean that when Sam ends up with her at the end of Return of the King, it could work out as a semi-prequel to Home Alone. There is nothing we haven’t thought of. Bada-Ring-Bada-MountDoom!

Merry and Pippin – Both George Clooney

Merry is annoying. Pippin is annoying. George Clooney is annoying in those Australian coffee ads. ReelGood simply put two and two together to come up with this perfect piece of casting. We’ll really only need to tell Clooney to ‘act like you’re ordering a NesCafe’ to get the necessary levels of irritating out of him. We’d obviously probably have to make him put on the high-pitched Scottish accent that Pippin had in the original trilogy, just so the audience could tell the two apart. Also, nowadays it seems like Hollywood throws in a Matt Damon here and Cate Blanchett there whenever Clooney’s involved, which would really boost the calibre of the orc acting.

For the part of Aragorn, there could be no mistakes, so integral is the character to the success of The Lord of the Rings. We needed someone charismatic, physically adept and handsome enough that the audience could believe a beautiful female elf could fall in love with him. Ultimately, there was only one man who could play that part and that was Frank Reynolds himself, Danny DeVito. We’d also give the future King of Middle Earth a signature fighting move – the dreaded forward roll. Instead of Legolas surfing a shield down a flight off stair during the Battle for Helm’s Deep, now Aragorn will curl up into a ball and knock his enemies down like bowling balls, all whilst hurling insults like ‘asswipe!’ at them. If we weren’t convinced that DeVito was up to the challenge of playing Aragorn after his turn as Mr. Wormwood in Matilda, we certainly were after seeing him take a shit in a bin and drink wine from a can in It’s Always Sunny in Philadelphia.

“Say Ring one more time motherfucker!” Our main problem with the original Galadriel was that she wasn’t bald, she didn’t wear an eyepatch and she didn’t yell at everyone she met. Enter Samuel L. Jackson, a man who had a clause written into his contract stating that every part he takes must include those three elements. During the Giving of the Gifts, rather than mess around with any Light of Eärendil bullshit, Galadriel will now gift Frodo a pair of pliers and a blowtorch with a cheeky wink and send him on his merry way. Additionally, in the eagerly awaited Extended Edition BluRay, we could finally reinstate the scene in which Galadriel and Elrond cruise around on Oliphaunts discussing what they call Lembas bread in Rohan.

Sass. That’s something Liv Tyler’s Arwen was lacked in Peter Jackson’s original trilogy. Not to worry, because thanks to a handy bit of recasting, we’ve more than compensated for Jackson’s glaring mistake. In a nod to Rob Marshall’s 2002 Oscar-winner Chicago, we’d include Latifah’s musical number from that film “When You’re Good To Mama”, which Arwen would sing at the commencement of the Council of Elrond.

ReelGood chose Miley Cyrus for the part of Gollum out of sheer laziness, since there’d be very little acting direction required. We also know she’s fond of the hallucinogen salvia, so we could bong her right up between takes to add to the erratic Smeagol/Gollum conflict.

Good at acting are we, Meryl? Prove it. ReelGood has decided to cast Meryl Streep in the roles of both Gandalf and Legolas. The catch? She has to pull off both roles without the help of trick photography or special effects. ‘What about scenes where Gandalf and Legolas are in the same frame?’, we hear you ask. Well, if Meryl isn’t up to the challenge then she really shouldn’t have gone around telling everybody how great at acting she is. To add to the challenge, ReelGood will attach 100-pound bowling balls to Streep’s legs during each take. This will not only aid her in projecting the wearisome toll that the Quest is taking on Gandalf and Legolas, but also prove to her once and for all that we are not impressed. Not one bit. 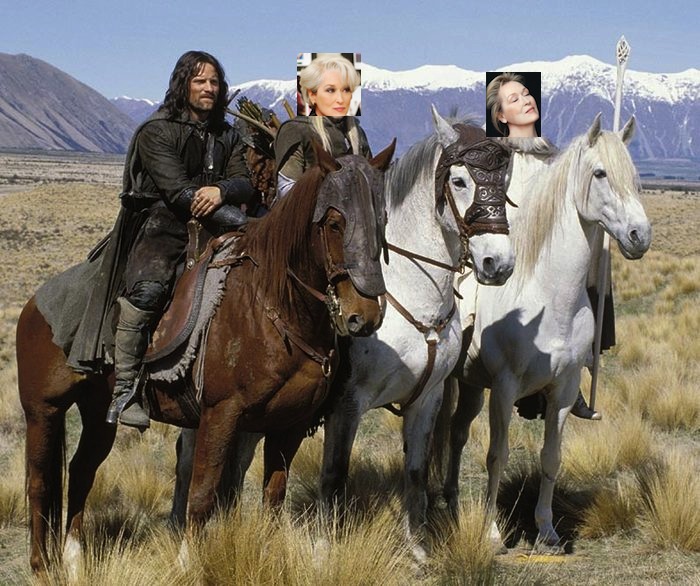 “LET THEM COME! THERE IS ONE DWARF YET IN MORIA WHO STILL DRAWS BREATH!” There’s no way anyone reading this could honestly admit that line wouldn’t sound better roaring out of Harry Potter’s mouth. There’s something appealing about sticking a fake beard and a bowl-shaped helmet on Daniel Radcliffe that ReelGood just can’t ignore, and neither should you. For the sake of levity, we’d probably have to add a whole bunch of scenes where Aragorn, Legolas and Gandalf just sit around patting Gimli on the head and giving him tummy scratches. Because Daniel Radcliffe is a good boy, yes he is.