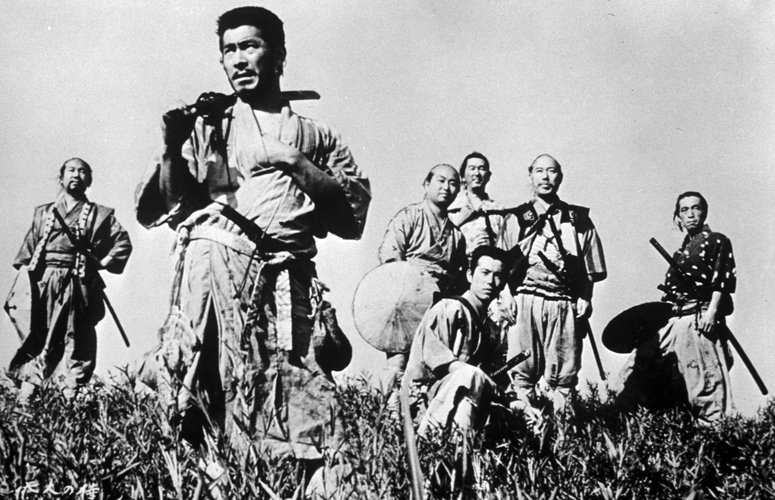 Even if you’ve never heard of Akira Kurosawa, his works probably sound familiar. Here are two of his most influential films and a few of the remakes that they spawned over the years.

Set four centuries ago in the Edo period, Seven Samurai is a bare-bones story about poor villagers who seek Samurai to protect them from a ruthless mob of bandits. Despite being three hours long, the film doesn’t drag its feet. The core of Kurosawa’s film comes from its ensemble cast of samurai who represent different warrior archetypes reacting and adapting to the circumstances of the period; the setting is a time of upheaval and class instability, as the Samurai began to lose their relevance with the introduction of guns and horse warfare. The battle of the underdog samurai against the superior bandits is, in some ways, an attempt to defy their inevitable extinction.

The film has a lot going for it. It’s visually stunning (if you can tolerate some shoddy bald-caps) and the fight scenes are understated but impressively shot. The cast is instrumental to the film’s legendary status; Japanese film legends Takashi Shimura and Toshiro Mifune get the meatiest parts , and other Kurosawa regulars make up most of the main cast. While much of the film is specific to Japanese culture, the story has a universal resonance. The villagers are driven by fear and the bare necessities of survival, while the samurai they hire are drawn in by the desire to have a purpose. It’s now sixty years since Kurosawa told these stories, yet we’re still seeing them play out on a regular basis.

Arguably one of the best remakes across cultures and genres, Magnificent Seven makes a strong effort to recapture the epic narrative of the Seven Samurai while creating its own living, breathing world. It directly credits Seven Samurai as its source, and boasts the same basic premise: villagers are forced to hire seven mercenaries to protect them from recurring bandit attacks. At the same time, the film has a rather different set of characters and goals as a film. Where the original depicts the decline of the samurai class, Magnificent Seven contemplates the futility of life as a gunslinger in the West.

Inevitably, it loses some of the original’s meaning in the cultural transfer. Specifically, the relationship between the largely North American gunslingers and the Mexican villagers lacks the rich history of conflict that the samurai class and the farmers built over hundreds of years, which feeds into a tension in Seven Samurai that falls a little flat in The Magnificent Seven. The remake is also an hour shorter than the original, so the story and characters aren’t quite as developed; notably, it doesn’t do quite as much with its reckless would-be character as Seven Samurai does. Still, the film makes particular effort to characterise the bandits, headed by Eli Wallach, which propels the film in a fairly different direction.

If seeing this story play out twice is still not enough, this lovable low-budget sci-fi is a good candidate for a third viewing. It’s probably more indebted to The Magnificent Seven than Seven Samurai (it was billed as The Magnificent Seven in Space in Spain), but it has plenty of ties to both films. Robert Vaughn plays a character almost identical to the one that he played in the Magnificent Seven, and another character known as the Space Cowboy is an unrelenting homage to the film’s Western origins. The planet under attack is called Akir, and its people Akira, a not-so-subtle nod to Akira Kurosawa. But in many ways, Battle Beyond the Stars a distinctly separate film. The main character is a Luke Skywalker-styled underdog hero from Akir, and his continued presence and agency in the story makes the film much more hopeful than its predecessors. The mercenaries aren’t from any particular caste or occupation, so there’s no real focus on uselessness or futility during the fighting.

The film is worth watching alone for its goofy low-budget resourcefulness and the interplay between its alien characters. At times it suffers from poor editing, particularly during its chaotic battle sequences, but some early James Cameron special effects and a solid James Horner score help redeem the action. Perhaps this film loses something by applying Kurosawa’s ideas to a fictional universe, but it’s definitely a testament to the universality of his films that it still makes for compelling viewing.

Seven Samurai’s legacy doesn’t stop there, either. You could try Three Amigos, Galaxy Quest, or A Bug’s Life. Not even kidding.

Another of Kurosawa’s most influential films is Yojimbo, which is itself a loose adaptation of the Dashiell Hammett novel Red Harvest and the 1942 film adaptation of his novel The Glass Key. It’s another film with the simplest of premises: a lone wanderer comes upon a town caught in the crossfire of two feuding factions, and decides that he wants to play them off against each other. Being focused on a single character, it’s a much shorter and punchier film than Seven Samurai. It balances action, drama, and comedy, with tense and heartfelt scenes set alongside ridiculous make-up and comical overacting. The star, Toshiro Mifune once again, seems particularly able to switch between comedic and dramatic seamlessly.

Like Seven Samurai, the setting is specific to the decline of the samurai, with the rise of capitalism beginning to render honour and feudal relationships obsolete. The protagonist’s strength in the film comes from subverting the expectation that he will serve his employers loyally. Instead, he survives through equal measures of skill and cunning, making him more of a model Western character than a typical Eastern hero. In addition, the atmosphere and visuals are clearly inspired by John Ford-era Westerns. It is, in many ways, a clash between Eastern and Western filmmaking.

A Fistful of Dollars was not a sanctioned remake of Yojimbo, and Sergio Leone did not feel it necessary to credit Kurosawa since he himself had adapted his film from other materials. It was so similar, however, that Leone was sued by Yojimbo’s production company Toho and had to settle outside of court. The premise was a carbon copy: as Eastwood’s Man With No Name puts it, “The Rojos on one side of town, the Baxters on the other, and me right in the middle.” The majority of Fistful’s characters have a direct counterpart in Yojimbo, and a great number of scenes and shots are clearly lifted. Where Yojimbo has swords, Fistful has guns, and the only gun in Yojimbo is replaced by a bigger gun with a meaner owner.

Yojimbo’s story and themes fit seamlessly into the Western genre, being so heavily influenced by
Westerns in the first place. The main difference is that while each death in Yojimbo is a tragedy to some degree, deaths in Fistful are rather swift and meaningless in true Western style. The film suffers for not being able to replicate Yojimbo’s excellent framing and for skirting both the comedy and stillness of the original. Still, Fistful was the perfect vehicle for Leone to begin his experiments with the Spaghetti Western, and the heavy stylisation works to make the film fresh despite its derivativeness.

Fans of really bad fantasy can rejoice; there’s a version of Yojimbo made just for you. This insane trainwreck of a film features David Carradine, bad dubbing, a psychic lizard, and many more things of that nature. It also revives the overacting and ridiculous makeup of Yojimbo in a way that could pass off as being an intentional homage, but very likely isn’t. The premise is identical to its predecessors, but the film tends to wander off on its own at key points. This could have worked in the film’s favour, but it has the unfortunate tendency to cling onto scenes from the original and shoehorn them in regardless of whether they make sense or not.

The fantasy world itself is fairly interesting, though not very developed. Carradine is the last of an ancient religious order, which works as a neat parallel to the obsolete samurai and lone gunslinger. One of the best changes is the inclusion of a power struggle to control the well in the centre of the village, which is just about the only relatable conflict within the film. Most changes, however, tend to just convolute the plot; the addition of a third party to the village’s power struggle, for example, turns the final battle into an incoherent mess. It’s sometimes hard to distinguish whether the film is remaking Yojimbo and Fistful or just taking off Star Wars – it’s a great question to ask yourself while you’re wondering what you’re doing with your life.

See also: the officially sanctioned Western version of Yojimbo, Last Man Standing starring Bruce Willis. It’s fairly miscast and not quite as fun as Fistful, but it’s a solid film in its own right.