For one reason or another, there isn’t an abundance of films based on the art of rap. Castigated for its ultra-violent and sexual overtones, excessive profanity and degradation of women, the genre has been the victim of and even revelled in many a controversy. But despite (or perhaps in spite of) its critics, hip-hop has proven to be much more than simply a fad, even transcending mediums. The classic “rags to riches” story is no more at home than in the realm of hip-hop and these tales, whether they are fictional or biographical are more or less academic in their adaptation. While many have failed – predominantly due to the banality of their narratives – a handful have provided an authentic and well produced look at the glamour and drama of the rap scene. 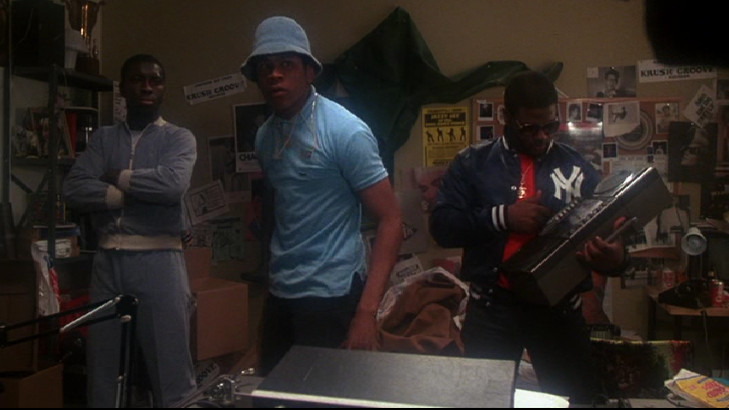 Perhaps the biggest success story of rap is Eminem. Unwavering in his irreverent and impertinent disposition, Marshall Mathers has lived quite a tumultuous life, the subject of a vast majority of his music. 8 Mile presents a semi-autobiographical take on Em’s early life. Starring Eminem himself – a more tempered version of his real life persona – 8 Mile captures the insurmountable odds of a white rapper just trying to make it in a world people feel he doesn’t belong. Detroit’s ambience is bleak and the film’s overall tone reeks of hopelessness, but Eminem’s lyricism and drive is inspiring. With the assistance of a fantastic cast, 8 Mile proves that a drama set in the world of battle rapping can stand on its own two.

Following in the steps of his label mate, Curtis “50 Cent” Jackson pulls his own 8 Mile, starring as Marcus Greer, an aspiring rapper seeking to purge himself of the life of drugs imparted to him by his late mother. Unlike 8 Mile, Get Rich or Die Tryin’ presents a much more glorified and fictional version of the events that 50 Cent experienced, but the film plays off of the occasional lapse in authenticity and cultivates scenes of high drama, employing a little more polish than its grimier counterparts. 50 Cent’s acting leaves a lot to be desired but it can be forgiven thanks to a great support cast and a tightly wound and passionate script.

In the midst of the South’s rise to prominence within the hip hop world, Hustle & Flow came out of left field, surprising everybody with its unglamorous and gritty semblance. Terrance Howard plays Djay, a pimp in Memphis who grows dissatisfied with his life as it is and starts developing music. Terrance Howard’s portrayal stands out as one of his best performances and the scripting, albeit far from ground breaking, garners empathy and intrigue. The films shining light however stems from its musical sequences where we witness the crew construct songs from the ground up. It was remarkable enough to earn the team an Oscar for “It’s Hard Out Here For A Pimp”.

Anyone that knows even the slightest about rap know who 2pac and Biggie are. Former friends. Bitter enemies. Both shot dead within a year of each other, their cases remain unsolved. The two most iconic figures in hip-hop to this day. Notorious is a biopic on Christopher Wallace, also known as The Notorious B.I.G. and with his mother and manager/best friend Sean Combs serving as producers, they would be remiss if they didn’t attempt to make this one hell of a film. Notorious brings to light Wallace’s adversity with 2pac, the tangled web of women in his life and his rise to success. Focused more on the lavish side of his life Notorious’ only problem is that it paints him as a saint, when in reality Biggies shortcomings and flaws not only defined him as a musician but as a person. Despite this, Notorious stands as worthy homage to one of hip hops greatest.

Not quite the progenitors of Rap, but close nonetheless, Run DMC and Russell Simmons pioneered a new wave of hip hop in the late 80s’. Krush Groove is based loosely on the beginnings of Def Jam recordings and some of its rising stars, all played by themselves. The Fat Boys, Kurtis Blow LL Cool J among others contribute to Krush Groove’s captivating 80’s flair. The entire film is permeated by the sounds of the artists and the musical segments exhume incredible amounts of energy. Russell himself served as a producer on the film yet it still boasts a few inaccuracies, however he always said that Krush Groove existed solely as a platform to showcase these upcoming acts and to that end, it succeeds.