Doris Payne sits sphinx-like in a dreary office in San Diego. The 80-year-old is listening to her lawyer discuss the possibility of a five-year prison term.

Payne’s soft brown cheekbones are arched, she wears a serene stare, two gold loops droop from her ears; she conjures inarguable elegance. Being in front of a lawyer’s desk isn’t new territory for the octogenarian: she is one of the most notorious jewel thieves of all time.

Her sixty-year thieving career has taken her to Italy, to Switzerland, Monte Carlo, Japan. She has stolen an estimated $2million worth of jewellery.

Filmmakers Kirk Marcolina and Matthew Pond stumbled across her story in a newspaper article, when Doris was serving time in a California jail. The seed of an idea was planted, and eventually became the documentary The Life and Crimes of Doris Payne. Last week the film was awarded the Audience Choice Award at the Antenna Film Festival in Sydney and has been picked up by numerous other festivals.

Pond became infatuated by the idea of making a film about Doris and met with her whilst she was in an Orange County jail. Slowly, over many weeks of meeting, he coerced her – and his directorial partner in crime, Marcolina – that a film should be made.

Marcolina says he was doubtful they’d be able to persuade Doris, “I was very dubious,” he tells ReelGood. “It took determination on Matthew’s part. I never thought he was going to convince her, but I was proven wrong.”

But he can understand why she agreed to the production. “Ultimately, I think she’s proud of her life and what she’s done and she wanted to have a platform to be able to tell others that this was her story, this is how she made her mark on this world.”

The film begins by explaining Doris’s origins in segregated West Virginia, where she lived in abject poverty and witnessed the violent relationship between her African-American father and Turkish mother. 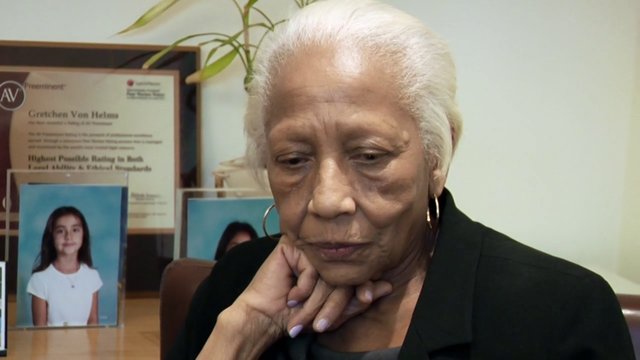 The narrative quickly spirals into her life as a professional thief; a time spent sewing diamonds into garters, tumbling out of moving trains. Doris recounts these stories to the camera frankly – as if there was nothing unusual about shaking the authorities by plunging from high-speed rail. She says she simply picked herself up, dusted off her mink coat and escaped into the night.

Due to the lack of archival footage and photographs available, re-enactments help tell the chapters of her past criminal escapades. Unfolding in the contemporary realm of the film is the legal drama surrounding Doris’s latest alleged theft in a San Diego department store.

Most interview weight is given to Doris herself – she becomes the narrator of her own story – which seemed an important choice for the filmmakers. There is also no external attempt to dissect her psychologically. “We certainly thought about delving more into her psychology,” says Marcolina, “but we thought the best way for the audience to really understand who she is, was just try to let the audience see her in many different situations and let her personality come out that way, rather than have some psychologist who didn’t know Doris opine about her.”

Pond and Marcolina filmed her for about a year, and the entire production took about three. It was financed by the filmmakers themselves; “our credit cards are screaming,” says Marcolina.

The filmmaker believes the quality of a documentary hinges on the strength of the characters involved: “I think first and foremost is a good character,” he says, “somebody who has a good presence on camera and who isn’t one dimensional – somebody who is a lot of different facets, so you can sort of peel off the different layers of the onion.”

This is certainly true of Doris, who can seemingly switch from sweet, giggling grandma, to nostril-flaring she-beast, with no prior warning. Marcolina says this made their working relationship interesting: “When you’re dealing with Doris, one moment you are having an awesome time and you’re having so much fun with her, and the next moment you’ll want to pull your hair out.

“She does have – well some people say she has – multiple personalities, you can really see her switch, on a dime. That would happen to us oftentimes, even when we were interviewing her, things would be going really well, and then you’d ask what would seem to be a normal question and she would start screaming at you.”

The plausibility of some of the stories Doris recited during interviews was something the filmmakers doubted. But, after a hefty stack of paperwork and a yearlong wait, they received Doris’s FBI file, which confirmed everything she had told them.

“You’re never sure is whether Doris is lying to you or not,” Marcolina explains, “when we were interviewing her, she would tell us some pretty tall tales and oftentimes we would be riding home from the interview thinking, ‘oh she’s lying about that – she’s gotta be – there’s no way that’s the truth.’ But, time and time again, once we finally got the FBI files, [it proved] she wasn’t, she was telling the truth – she really had this crazy, crazy life.”