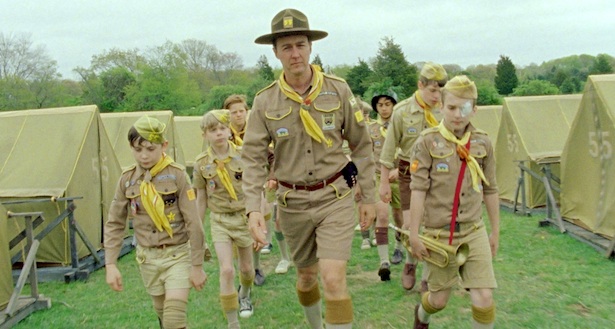 “Here we are doing a paper. We could’ve stayed in school!”

The Peanuts gang is faced with quite a disappointing experience when they arrive at Camp Remote – rather than the fun, relaxing summer camp they expect, they are made to live a strict, organized life, scheduled in military time. If that weren’t bad enough, there are also three bullies at the camp to contend with. Although the trio brag about winning the Camp Remote race every year, they have in fact always won by cheating – until this year, when they are defeated by the Peanuts kids. This victory leads to Charlie Brown developing more self-confidence and leadership skills, turning even this harsh, rigorous camp life into a positive experience. Camp Remote may not be fun, but Peanuts movies sure are.

Camp Crystal Lake is run by some of the most irresponsible counsellors to ever exist – they are usually too busy having sex with each other to take care of the kids, or to pay attention to the guy who’s warning them about their impending doom. Friday the 13th’s vengeful killer, Mrs. Voorhees, is terrifying and deranged – but really, who can blame her for being that way? Years earlier, the counsellors at the camp let her own son drown, while they partied! In her eyes, she’s performing a public service by preventing such a tragedy from reoccurring. Besides, the counsellors had their chance to escape, but they didn’t take it. If we can learn anything from Friday the 13th, it’s this: when someone tells you the camp you’re headed to has a “death curse”, you should probably listen to them.

“Andre, we don’t use profanity or double negatives here at True Directions.”

True Directions is not a camp that anyone chooses to go to, mainly because the “direction” that the campers are sent in is one of repression and closeted homosexuality. It is, in other words, a queer rehabilitation centre. Megan (Orange is the New Black’s Natasha Lyonne) is a naïve teenage lesbian who gets sent to this camp by her conservative parents after they begin having concerns about her sexuality. The camp mirrors the artificiality of conventional gender roles, its walls, furniture and uniforms being coloured in either bright shades of blue for the boys, or pink for the girls. Megan and her fellow campers are put through ridiculous activities such as simulated sex (boy-girl, of course) in a vain attempt to “cure” them of their homosexuality. Despite being an innocent-looking camp that is visually reminiscent of a Barbie Dreamhouse, it is a militant homophobic prison on the inside.

“You take a bad boy, make him dig holes all day in the hot sun, it turns him into a good boy.”

The above quote summarizes the overarching philosophy of the juvenile detention camp to which Stanley Yelnats (Shia LaBeouf) is sent. The mean, aggressive counsellors at Camp Green Lake force all their residents to dig holes day in and day out, ostensibly with no real purpose other than “building character”. However, there is in fact another purpose for their labour – the camp counsellors have been using the inmates to search for a long-lost treasure. This corrupt scheme connects to Stanley more than he knows, and along his journey to discovering the truth about the camp, an escapade of friendship, fortune-tellers, impromptu musical numbers and onions ensues. The events occurring in the film are all quite engrossing – entertaining, even! – but if Camp Green Lake were real, there would be quite a few child labour lawsuits to deal with.

“Well, I hope it’s not jumbo shrimp, because I’m allergic to oxymorons!”

A strange and satirical cult classic, David Wain’s Wet Hot American Summer follows a day in the lives of a group of camp counsellors on the last day of camp in 1981. The film’s ensemble cast includes many famous names such as Janeane Garofalo, David Hyde Pierce, Molly Shannon, Christopher Meloni, Paul Rudd, Amy Poehler, Bradley Cooper, Joe Lo Truglio and Elizabeth Banks. The fictional kids’ summer camp at which they work, Camp Firewood, is a lot of fun for the counsellors, but not so much for the children themselves. The employees’ negligence leads to a lot of problems for the camp, such as when Andy (Rudd) is too busy making out with a girl to save a child from drowning – but as it turns out, they’ve got bigger problems to worry about. Problems from outer space.

“My daughter was abducted by one of these beige lunatics!”

The protagonist of Moonrise Kingdom, Sam (Jared Gilman), is part of a khaki scout camp run by the sweet but incompetent Scoutmaster Randy Ward (Edward Norton). While the kids at Camp Ivanhoe learn lots of valuable skills, such as tying knots and making campfires, they’re not so skilled at being kind. Sam becomes ostracized from his fellow scouts because of his strange, introverted behaviour. Their treatment of him is so bad that he is eventually driven to run away. This seems like a fun adventure for Sam, but it doesn’t reflect very well on the camp, and makes Scoutmaster Ward look particularly bad. However, during Sam’s adventure, we see that what he lacks in social skills, he makes up for in survival skills. Perhaps his time spent at Camp Ivanhoe was worth something after all.

Camp Chippewa is an all-American, upper-middle-class camp, and they know it. Bitter about being sent to this awful camp, Wednesday comments that Chippewa means “orphan”. This isn’t true, of course, but teenage angst will make you say some strange things. Filled almost exclusively with rich white children, the campers flaunt their arrogance during the Thanksgiving Play, in which they play pilgrims while outcasts like Wednesday Addams (Christina Ricci) are placed in the role of the supposedly “primitive” Native Americans. Although the Addams kids burned down the WASP-filled camp in the film, the real camp is still standing in Sequoia Lake, California. Not that anyone would want to visit.

“At least at home they have cable.”

In this Disney film, a group of kids live out the ultimate childhood fantasy of creating a community run and ruled by – well, by themselves! With no grown-ups to order them around, their kids-only, no-rules camp is Lord of the Flies gone right. The children band together to trick their respective parents into thinking that they are each in fact attending different camps (such as “fat camp” and military camp), and then use the money their parents obliviously paid in order to help sustain their own camp, which is in fact just a rented cabin on a lake. Being young and hopeful, the campers don’t really consider how slim their chances are of actually getting away with this plan. Or perhaps they know they’re doomed to fail, but don’t care. Their parents are sure to find out at some point, but they can still enjoy themselves until that day comes.

“The fish and game commission has raised the legal kill limit on campers to three.”

This Canadian comedy is notable for being not only the first film directed by Ivan Reitman (of Ghostbusters fame), but also for being Bill Murray’s first film appearance in a starring role. The movie follows the antics of various counsellors, as well as a rivalry between Camp North Star and the wealthy Camp Mohawk across the lake. The head counsellor Tripper (Murray) takes the lonely, friendless Rudy Gerner (Chris Makepeace) under his wing, teaching him all about life, friendship – and women. Meatballs is a teen screwball comedy, so the campers’ days are filled with sexual innuendo, practical jokes, and not much else – all leading up to the annual inter-camp Olympiad against Camp Mohawk, which the North Stars just barely win. Camp North Star is a camp for underdogs, and that’s just the way they like it.

“There’s no way I can go to camp with pierced ears and come home without them.”

In The Parent Trap, two long-lost twin sisters – children of divorce – are both conveniently sent to Camp Walden without their respective parents’ knowledge that the other sister will be there. Once Annie and Hallie (both played by Lindsay Lohan in her breakout role) meet and realise that they are sisters, they hatch a plot to switch identities so that they can each get to know the parent that they’ve been missing their whole lives. Their plan eventually leads to the girls reuniting their separated parents once and for all. This is a pretty monumental event in the girls’ lives, and it would have never happened if it weren’t for their chance meeting at the camp. Camp Walden – bringing families back together since 1998.