“The world needs bad men. We keep the other bad men from the door” – Det. Rustin Cohle

As the credits rolled on the third episode of True Detective, “The Locked Room”, Cohle and Hart were hurtling towards one of those other bad men; the eerily monikered Reginald LeDoux. We’ve learnt that men who can appear good, like Cohle and Hart themselves, are capable of bad things. Foreboding and malevolence fill the final ghostly image – a machete wielding figure with a elephant trunk-like gas mask striding like Bigfoot across an overgrown field. Is this LeDoux? It begs the question; if men like Cohle and Hart, who appear outwardly decent, are capable of evil, what of men who look like monsters?

There’s an increasing possibility that the murder of Dora Lange was the result of a larger network of men, rather than the act of a lone serial killer. Nic Pizzolatto is certainly offering the audience multiple avenues of prospect as to the identity of the killer, and they’re all connected. Not least in the growing list of suspects is religious leader Billy Lee Tuddle. Tuddle was introduced back in Episode One as the cousin of the Louisiana governor and his name keeps reappearing in connection with Cohle and Hart’s leads. Tuddle claims his interest in the case is purely religious, but his association to Lange’s church and to some of the other suspects suggests otherwise. 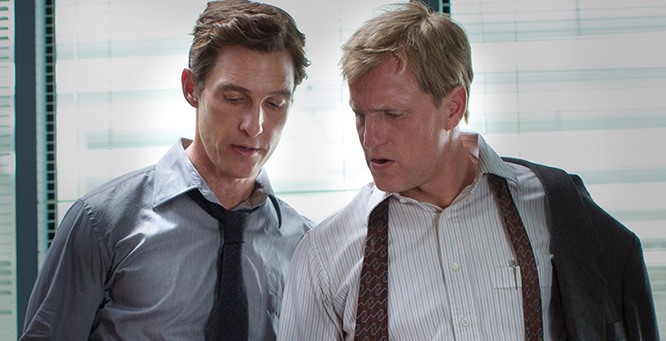 Cohle and Hart’s own relationship is becoming increasingly volatile, despite occasional moments of camaraderie. Hart still struggles with Cohle’s bleak outlook on the world (his idea of what Cohle gets up to by himself at home was fantastic, as was Cohle’s wry smile in response), although Hart’s own integrity is growing questionable. There’s an instinctual aggressiveness to Hart, particularly evident here in his reaction to Cohle ‘returning the mower’ and his drunken attack on Lisa’s lover. Alternatively, Cohle is seeming progressively human and decent. There’s a sense of duty to Cohle that extends beyond his work. He mows the Harts’ lawn and joins them at the dance to be a decent friend and partner, despite his inclination to disengage.

The possibility of holy motivation was central to the opening sequence of ‘The Locked Room’. After uncovering the eery painting at the abandoned church during the final moments of last week’s episode, Cohle and Hart were led to an equally unnerving revivalist church. The same revivalist church, it turns out, that Dora Lange attended before her murder. While Cohle interrogates a mentally challenged eunuch, Hart goes on a stroll with the minister’s daughters, learning that Lange was always accompanied to the church by a ‘tall man with a shiny face.’ The duo quickly dubs him ‘The Tall Man’, conjuring up the same sense of mythology akin to “The Tooth Fairy” in Michael Mann’s Manhunter or ‘The Smoking Man’ in Chris Carter’s classic series X-Files. It’s in this remarkable ability to develop atmosphere that True Detective is arguably most successful. The show has an otherworldly quality, but rarely feels too farfetched. Elements such as the ‘The Tall Man’ or even Cohle’s hallucinations never subtract from the fundamental reality of the story.

The investigation has finally generated some leads and there’s a gun battle on the way. There’s a sense of apprehension to the introduction of Reggie LeDoux that builds a momentum True Detective lacked in its initial two episodes. It may be a red herring, or it may be a Breaking Bad-style faux-cliffhanger. Either way, because of the Super Bowl, we’ll have to wait two weeks for the next episode. And it’s going to be a long wait.