Pizzolatto has previously stated on a number of occasions that there will be no unforeseeable Shyamalyan-esque twist during the final episode next week, and he certainly seems to be genuine about this claim. We’ve been given enough information to make decently informed opinions on what is to come. Billy Lee Tuttle is certainly involved – that much was confirmed by the photos and video Cohle uncovered from the Reverend’s house – and he’s probably involved in a big way.

It’s also looking likely that the murders are deeply connected to a number of members of the Tuttle family, stemming at least as far back as Billy Lee Tuttle’s father, Sam. The influential Louisiana family are most likely these ‘rich men’ Charlie refers to. But the Tuttles are not the only men involved, which is clear from connections a number of characters, including Reggie Ledoux and the pharmacy killer in 2002, have to The Yellow King, Carcosa and the recurring motif of Black Stars. There’s a compelling, albeit currently flawed in some regards, theory concerning ‘Five Horsemen’, that is definitely worth investigating for the more curious of viewers.

The most memorable scene in “After You’ve Gone” was when Cohle and Hart decided to visit a former housekeeper of the Tuttle family. She reveals Sam Tuttle was quite disturbed sexually, and had “lot of children, all types” with various women. He also only liked to sleep with virgins. She also makes mention of the Tall Man, the mysterious man with the disfigured face who has been referenced by a number of characters as being connected to The Yellow King conspiracy. According to the elderly woman, he was Sam Tuttle’s bastard grandchild, and had been maimed by his own father. After Cohle showed the woman sketches of the ‘devilcatchers’ he’d found over the course of the investigation, her coherence took an unexpected drop into a trancelike state, as she asked him ‘You know Carcosa? Him who eats time? Rejoice, death is not the end! Rejoice, Carcosa!” 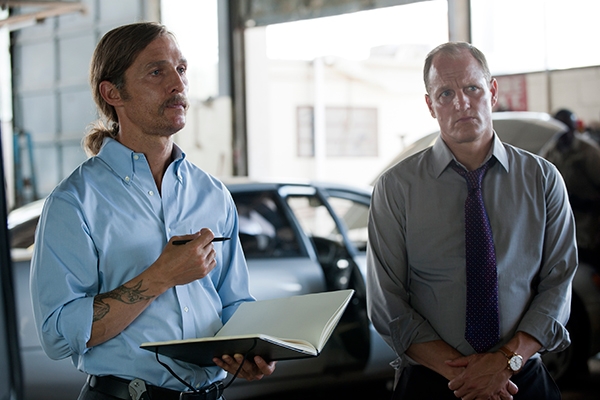 The Tall Man with the scars was almost certainly the gardner during the final moments of the episode. We’ve seen him before, way back in Episode 3 in the 1995 timeline, just before Hart gets the call regarding Reggie Ledoux. Back then, the lawnmower man was sporting a thick beard, although his scars were in full view in 2012 when Papania and Gilbough ask him for directions. The elderly housekeeper said that when she knew him, he was a boy and his surname was ‘Childress.’ There’s a pretty strong possibility that this man is The Spaghetti Monster that has been mentioned a few times. Cohle is convinced that it all ends with him. The name Childress has surfaced a number of times throughout the show, most notably Ted Childress, the Sheriff of Erath during the time young Marie Fontenot was murdered, who might have been involved in sweeping suspicious activity under the carpet.

“They had animal faces. That’s why I decided it had to be a dream.” Tobey Boulere

The suspects are clear, and if Pizzolatto is to be believed, there will be no secret twist during the final hour of True Detective. This means that the pieces just need to fall into place and we’ll finally see which of the thousand theories floating around the internet are correct. Perhaps most compelling is the idea that Hart’s daughter Audrey is involved. That Audrey might have been a victim of The Yellow King cult is suggested a number of times, through her disturbing drawings in primary school, the arrangement of her Barbie dolls (five men surrounding one woman in sexually aggressive poses) as well as her throwing the ‘crown’ into the tree, perhaps symbolically protecting her younger sister. The involvement of Audrey would certainly add onus to the seemingly grating domestic scenes involving Hart’s family, but more crucially it would mean that there may be surprises in the final episode after all. We know what Hart is capable of when he’s emotionally charged. How far will he go in the name of his daughter? There was definitely a sense of finality to Hart and Maggie’s discussion in “After You’re Gone”.

I was particularly negative about last week’s episode of True Detective, and thankfully “After You’re Gone” is a decidedly welcome return to form. But even when True Detective is at its weakest, there’s no denying the pervasive nature of Pizzolatto’s show. It sticks with you during the week in a way television rarely does. There’s one episode to go.